and the lady knows it's understood....

I’ve been doing this slot on and off now for a while, but I’ve a very special edition for you this week. One of the key characters in the ongoing tragi-comic melodrama of my life is about to make her very first personal appearance on this blog. I’ve talked about her here many times, of course, and posted up loads more photos of her than she’s probably comfortable with. To be honest, it feels a little bit strange describing the person I have lived with for the best part of 8 years as a “Guest”, but there you go. Her writing debut here comes some 2 weeks and one day before we get married and on the occasion of her birthday (I’m far too much of a gentleman to tell you her age. Oh alright then. She’s 33 – but in my view there’s no need for the Protect & Perfect just yet).

Ladies and Gentleworms, without further ado, it is my great pleasure to present for your earworming pleasure…. The birthday girl herself, my bride-to-be… 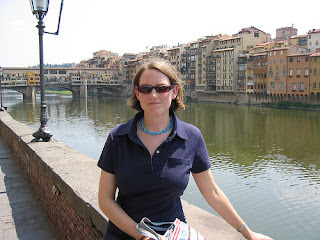 I feel like I’ve crossed an invisible line.
I’m no longer a reflection. I have a voice. I’m petrified.

OK, maybe I’m overplaying it a bit, but it is a big step. You will occasionally have seen glimpses of me on this blog, but don’t be fooled. That’s not me, it’s just a blurred view through a distorted lens. I feel like a fictional character who has suddenly crossed over into reality. Hence the fear. The picture of me that ST has sketched over the years is so flattering, so loving that I feel I can only disappoint.

To make matters worse, my musical repertoire is really ropey. But here goes…

For those who have been keeping up with the latest instalments of this blog, you will know that a certain playstation game has recently taken over our lives. I never used to understand the appeal of a playstation, always thought it was a boy thing. Now I sneak home from work early itching to plug it in, only to find ST has already beaten me to it. Curse the evil genius at Sony who came up with the idea.

Picture a fairly routine morning in the ST household. ST is surgically attached to his mac, I’m making us a cup of tea. I find myself humming a tune. “What’s that?!” interrupts ST. Quizzical look from C. “You’re singing… that’s an earworm. Put it on your list” he barks. “But it’s by Mozart, I didn’t realise I was allowed classical music.” Apparently it is a valid earworm. It’s the Queen of the Night’s main aria from the Magic Flute and it has been a recurring earworm of mine ever since it was used in an advert for tapioca on French telly in the 80s.

> 'Before I fall to pieces' by Razorlight

I’ve really got on ST’s nerves this week. The tune may be stuck in my brain, but I have a mental block when it comes to the song title. I’ve asked him about six times to remind me what it’s called. You should have been a fly on the wall when I sang it to him in bed to get him to identify the song. I can’t hold a tune. It was humiliating, and I’m amazed ST actually recognised it.

Not the whole song, just the bit that goes “bbbbbouge de la” and “j’tachete tes rap en dinars, non je veux des dollars car on m’appelle Solaar”. I had meant to get this added to the play list at our wedding, but forgot. I have fond memories of dancing to this track with my friend Iwan when I was about 16.

> 'Don’t marry her' by the Beautiful South

I won’t elaborate on this one. Maybe it’s an indicator of some deep-seated insecurity. It’s also just a cool song.

[ST's note - are we talking the full-on, unexpuragated version of this? Cool!]

> 'Message in a bottle' by The Police

I’ve practiced and I’m actually getting quite good at this one. I can play it on Medium at normal speed and get 90% note accuracy. Poor long suffering Mr Perrault who taught me the classical guitar for 7 years would be proud.

I have no idea why, but I fell asleep last night with “steps 1 2 and 3” going around my head on a loop. It works a bit like counting sheep.

It’s not so much that this is an earworm, it’s more that my iPod seems to like it a lot. I can’t go for a run without hearing it.

> 'Give it away' by Red Hot Chilli Peppers

This one is also from running with my iPod. Whenever it plays on my shuffle I run just that little bit harder. Sometimes I even jump up mid-run, thrusting my right arm in the air. In my mind’s eye I look like a rock goddess. To passers-by I probably look like I’ve injured myself.

> 'All Day and All of the Night' by the Kinks

I’m back at my parents’ house this weekend. On the train from Paris to Orléans last night this popped into my head. I wonder if it has anything to do with the fact that Orléans only used to have one night club called Le Balcon. It was a horrible place, full of predatory middle-aged men. It had two redeeming features. One was that they had band nights on a Sunday, and that they booked my brother’s band more than once. The other was that they always played this song before the bands came on. It came to represent the epitome of cool to me.

There you go. That wasn’t so hard, was it? Perhaps it’s just a little unfortunate that you make your debut here a week or so after you became addicted to Guitar Hero. Kiss are one thing, but I you should probably thank your lucky stars that you’re not earworming Motley Crue or Primus or Alice in Chains or something else like that from the game. Actually, perhaps one of the reasons that I like the game so much is that I secretly like bands like that. I think I rather appalled everyone when playing the game the other week that I knew the words to “John The Fisherman” by Primus, a song by a band no one else in the room had even heard of.

Altogether now: “When I grow up I long to be one of the harvesters of the sea”

I’m flying out to France this afternoon and I’m looking forward to spending the long weekend with my girl.

Have a good weekend y’all.

Don't forget: the earworms Podcast (thanks as always to Erika for this).