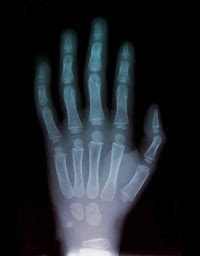 -
I spent an interesting couple of hours at the fracture clinic in the hospital this morning. I had a 09:30 appointment, and because QMC is something of a labyrinth, I turned up nice and early to leave plenty of time for getting lost. I've been in here more often than I would like in the last few months, and I know from bitter experience that it is a deeply confusing building, made worse by the fact that it's built into a hill, and what looks like ground level on one side is the first floor on the other side. When I was looking for the exit after seeing my neurologist a few months ago, I was stopped by some medical students and asked if I knew the way to the dissection room. Er, no. Thank God. Don't you?

I parked my car in the multi-storey and then wandered around the edge of the building to the main reception. I once made the mistake of taking a short cut through the side entrance opposite the car park and I then spent about half an hour trying to find reception, never mind finding my original destination. It's that kind of a hospital. After a bit of fruitless wandering and staring hopelessly at the map, I asked for directions and was sent down some stairs, round a few corners and then into a clinic that was directly opposite the car park. Hey ho.

I checked in at the clinic's reception and took my seat in the waiting room. Here I was a bit confused by a sign on the wall: "Patients are seen in appointment order but are not necessarily called in that order". I wasn't quite sure what they were driving at. I didn't know anyone else's appointment time, I only knew my own. People don't arrive neatly in appointment order. Some people arrive early, some people arrive late. Anyway, after about 20 minutes, it became a bit clearer when I was summoned through to the nurses' station and then promptly dumped in a secondary waiting room. Another 30 minutes passed before I was called up and taken to a cubicle and left for another 10 minutes to contemplate my x-rays on the wall. I don't know what time the clinic started, but they were already running an hour late by 10:30... although to be fair, I hope that all the doctors were working on really serious cases instead. I'd hate to think that NHS waiting time statistics meant that people like me get seen instead of a real emergency. They probably do though, don't they?

Soon enough, a consultant breezed in and kept me for about 3 minutes before very pleasantly discharging me. The long and the short of it is that my finger is broken and I have damaged the capsule surrounding the joint. Apparently I am lucky that I appear to have a full range of movement and that my finger is still relatively straight, but the joint will be swollen and painful for some time - perhaps as long as 2 years. There's nothing much else that they can do. Thanks for coming in, etc.

I knew that basketball was a stupid bloody game.
Posted by swisslet at 21:29