So anyway. On Saturday, we went to the Test Match at Trent Bridge in our traditional fancy dress. This year, the theme was VIKINGS.... 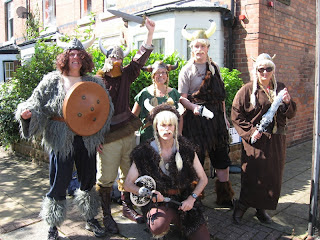 From l-r: Conan the Terrible, Thor the Great, Freygunnr the Fearsome, Odin the Magnificent, Brynhildr of Long Eaton and (crouching) Dave 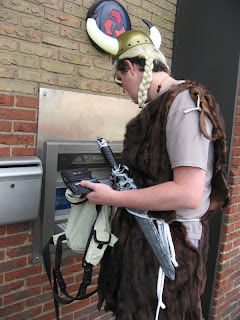 The modern viking nowadays has less of an urgent need to go out pillaging... 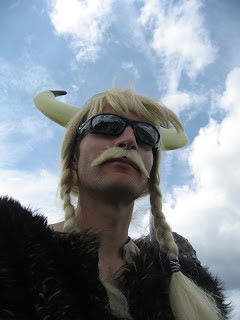 "We come from the frozen North in search of fertile lands to pillage. We will perhaps wait until the tea interval" 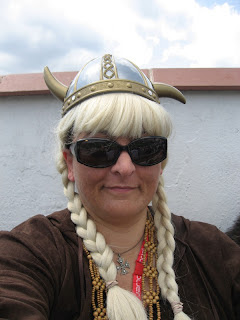 Many thanks are due to Brynhildr for her fantastic photos, more of which can be found here. I'd've brought my own camera, but sadly I had no pockets... frankly it's no wonder the vikings were always stealing what they needed.

Quote of the day was from Chantelle, the N-Power girl who greeted me on the gate by looking me up and down and saying:

"Are you really that tall?" 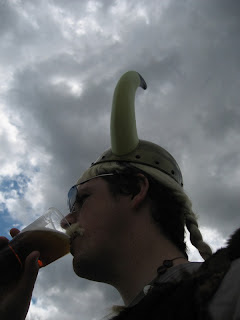 Odin the Magnificent sups on his mead and contemplates his nomination as moment of the day on ESPNStar, the TV channel that broadcasts cricket across the subcontinent and (presumably) to millions of people.

Text A for the WG Graces.
Text B for Sylvester and Tweetie-Pie
Text C for the Vikings.

I can only imagine we won comfortably. 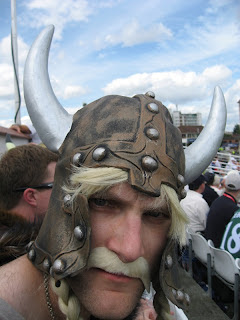 It's been a fair old while since I had a fringe. 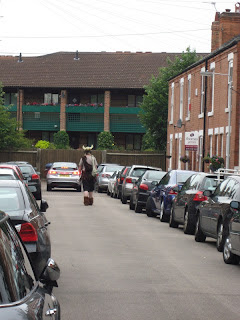 Because even vikings have a home to go to, you know.
Posted by swisslet at 21:27