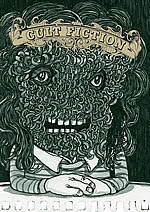 So, yesterday afternoon I popped into Nottingham to meet up with Sarah and with the intention of visiting "Cult Fiction: Art & Comics" which was on in Gallery at the Castle. We met up in the pub just outside the castle, had a leisurely drink and then headed up towards the gallery. It was approaching 4.15pm by now, but last admissions weren't until 4.30pm and we had plenty of time for a quick wander around.

The only problem was that the gallery appeared to be closed. We looked around a bit to see if there was another way in, and were approached by a man who had been out enjoying the early evening sunshine:

"Can I help you?"
"Yes, is the gallery still open?"
"No. I'm afraid that the last admission was at 4.30pm. We'll be shutting up soon, but there's still some time to enjoy the gardens if you like"

I was confused, and rather obviously looked at my watch. This confirmed that it was, indeed, still 4.15pm. I hesitated for a moment, but quickly decided that this wasn't an argument that I was going to win, so we turned on our heels and headed towards the Broadway instead.

The exhibition is on until September, so another time... 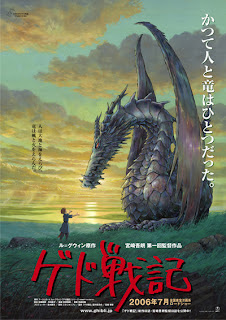 After another quick drink in the rather pleasant Broadway bar, Sarah and I decided that we would watch a film. Our options for the evening were "The Simpsons" (which I couldn't really watch as I imagine C. will want to see it), "The Walker" (which I couldn't really watch because it stars Woody Harrelson), "The Waitress" and "Tales from Earthsea". We opted for Earthsea in the end, and looked forward to some fairly unchallenging animation aimed at children.

....which is almost exactly what we didn't get.

This film was big in Japan: it pushed the second Pirates of the Caribbean movie off the top of the charts in Japan and remained at the top until it as pushed off by the last X-Men film several weeks later. I think something must have got lost in translation. In the following 2 hours, I don't think I understood a single thing that happened. There were some dragons, a king who got stabbed by his son, an utterly useless "archmage" called Sparrowhawk, a horse that looked a whole lot more like a llama, lots of guff about "true names", a wizard weirdly called "Lord Cob" in spite of being obviously female, who turned out to be a man (albeit one voiced by a woman), and a girl who may (or may not) have actually been a dragon. Indeed, for long periods of the film, nothing at all seemed to happen.

Still, some of the animation was very good... although I cannot imagine for the life of me how many kids are going to sit through that without a struggle.

All in all, it was a very trippy couple of hours.

To make up for the failure of our best laid plans for the afternoon, Sarah and I retreated to the Keane's Head where we had some more lovely beer and an absolutely delicious homemade Chicken and Tarragon pie.

No day that features a pie can ever truly be a write-off.

(Oh, and I've finished Harry Potter too. More on that another time).
Posted by swisslet at 17:16