modern, modern man is a man of many lives... 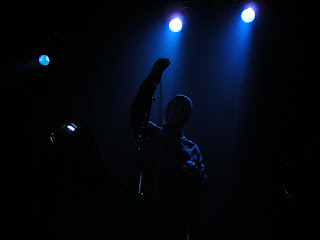 It's been a long day: at 10am I had my first alcoholic drink at a Beaujolais Breakfast; at about 2pm and after a seven course meal, I enjoyed a set of easy-listening classics by Nottingham legend Roy DeWired; at about 6pm we had an inspection by the RSPCA to make sure we were taking proper care of our cat.... and then at 8pm we hacked into town to check out a solo set by the former Housemartins and Beautiful South singer Paul Heaton. The Foo Fighters are in Nottingham tonight too, and if things had worked out differently, I would have been delighted to see them again. As it is, I'm more than happy to take the more sedate option and spend some time in a rather more intimate venue than the Nottingham Arena with C, Hen and LB (on the eve of his birthday).

I liked the Beautiful South. They were a good band who recorded some really excellent singles. I saw them in Derby a while back and thought that they were excellent. Given quite how distinctive his singing voice and his writing style are, just how different is a solo Paul Heaton set going to be? Well.... not very, is the quick answer, I suppose. He's got a new band and there's just the four of them on the stage, which must make quite a pleasant change for him after the Beautiful South... but you can't really get away from the fact that this is Paul Heaton singing at you...with that voice and with those biting, caustic lyrics. He seems to attract a funny crowd too - there's a good mix of ages, although the emphasis is on the older rather than the younger, but a strangely disproportionate number of them appear to be tossers. Not quite in the Arcade-Fire-At-Glastonbury league of tossers, but not averse to a bit of pushing and shoving through the crowd to get to the front or to get to the bar and back to the front again. There also appear to be some hardcore alcoholics with shiny skin and dazed, watery eyes. They're quite near to the front, but they look utterly lost, and about three quarters of the way through the gig, they amble back through the crowd and out of the venue. Weird. The crowd at the Foo Fighters the other day was certainly a lot friendlier, anyway. Perhaps rock brings out the best in people and cynical but mild sounding music brings out the worst?

Heaton looks great: he takes to the stage for once without wearing a bloody great anorak, and perhaps the reason is that he looks really trim and he wants to show it off a bit. Not bad for a fat lad - you can actually see a bit of definition on his cheekbones. If he is showing off though, that's the only sign of it. For the duration of the gig, he basically gives the crowd nothing and just gets on with the business of singing his new songs with his new band. That's fair enough I suppose, and he warms up enough towards the end of the gig to at least introduce us to the band. He's not really full of the joys of spring though. The songs sound good, but they aren't exactly happy songs, and he plays as though the audience wasn't really there at all. He gives us nothing. There's not one song that the audience as a whole recognise, and certainly nothing by the Housemartins or the Beautiful South. Just new stuff, most of it pretty good, but none of it a radical departure for him. The last song he plays is a cheerful little ditty called "Everything is Everything", and it appears to be a song that rails long and hard against the modern world:

Fairly typical, cynical Heaton lyrics, I suppose, but he delivers them with absolute spitting fury, almost with contempt. It's clear that he's not going to be playing anything after this, and sure enough, when the band finish, they all troop off and the house lights come up, leaving a slightly confused crowd to make their way home.

So a bit of a curate's egg of a gig really. The new songs sound good, but it's hard to relate to them properly when you are hearing them for the first time and you can't quite make out the lyrics (which are usually a real Heaton strong point and well worth listening out for). It's also a bit odd that he doesn't toss us any kind of bone by playing a couple of old songs, and this is compounded by the fact that he doesn't seem to want to talk to us or engage with the crowd in any way at all. The merchandise stand was selling "Paul Heaton is God" button badges. On the way in, I thought this was a mildly amusing joke. Perhaps he wasn't joking.

Watch this space, I suppose. I bet the album is good, but as an evening's entertainment it left a little to be desired.