I've built my dreams around you.... 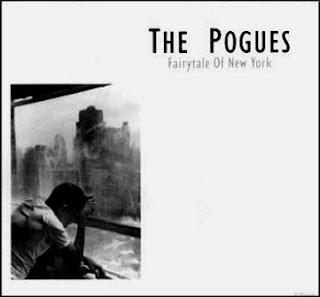 Not surprisingly, given the time of the year, people have been busy downloading festive songs for their iPods. One of the consequences of allowing downloads to count towards the official singles charts is that there are currently 8 'classic' Christmas hits sitting in the UK Top 40.... Wham!, Mariah Carey, Shakin' Stevens, Andy Williams, Slade, Wizzard, Band Aid and -- of course -- The Pogues and Kirsty MacColl.

Since it was released in 1987, "Fairytale of New York" has gradually established itself as almost everyone's favourite Christmas song. I think it's been dulled by repetition, but there's no denying that it's a fantastic record, and that the trading of insults between Shane MacGowan and Kirsty MacColl is a welcome antidote to most of the saccharine rubbish being peddled at this time of the year.

Most of us have probably absorbed the lyrics to this song subliminally over the last twenty years, so perhaps it's not all that surprising that there was an uproar when the BBC decided in their wisdom to only allow an edited version to be played on Radio One... the new version having the words "faggot" and "slut" dubbed out.

After a day fielding flak, the BBC backed down, with Controller Andy Parfitt saying:

"Radio 1 does not play homophobic lyrics or condone bullying of any kind. It is not always easy to get this right, mindful of our responsibility to our young audience. The unedited version will be played from now on. While we would never condone prejudice of any kind, we know our audiences are smart enough to distinguish between maliciousness and creative freedom. In the context of this song, I do not feel that there is any negative intent behind the use of the words, hence the reversal of the decision."

Quite right. Why would such a festive classic only be deemed offensive now. It's political correctness gone mad, I tell you.

Oh, but hang on. Just because it's a much loved song, does that make language like that acceptable? I can't help but think that Peter Tatchell might well have a point when he said:

"The word faggot is being sung as an insult, alongside scumbag and maggot. In this abusive context it is unacceptable"

I think he's right - in the context of the song, the word is clearly being used in a perjorative sense alongside other unflattering words. Substitute "faggot" for a -- say -- racially charged word and tell me that the song would be alright, because I'm not sure that it would be.

It's a bit of a storm in a teacup, I suppose, and it would be daft to bleep the song now, but language is powerful and sometimes we forget that.*

Or perhaps they were talking about meatballs.

Or bundles of firewood.

Either way, all the publicity has certainly not harmed the song's chances of topping its previous highest chart position of number#2 in 1987... when I looked last night, it was sat proudly on top of the iTunes chart for the week.

Speaking of Xmas songs.... head over to Del's place and download some other classics now.

[* interestingly, on the totally unnecessary Ronan Keating cover of "Fairytale of New York", the offending line is changed to "You're cheap & you're haggard", although apparently the word "slut" was fine. O Tempora, O Mores and all that....]
Posted by swisslet at 18:59