and we're spinning with the stars above... 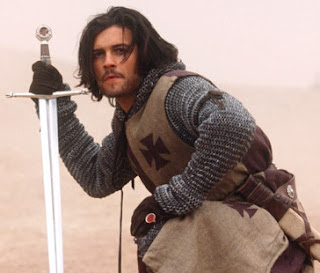 This ain't a scene.....The Crusaders: the original emo army.

I watched "The Kingdom of Heaven" on the telly last night, and although I didn't think it was really all that good, it made me feel slightly nostalgic for a couple of reasons. Although this was, strictly speaking, a little outside the dates of my area of expertise in the later middle ages, I got quite a kick from watching a dramatic retelling of some of the most momentous events in the early medieval period. You know, seeing knights running around and that kind of thing. Of course, like any serious historian, I'm not really a fan of historical reconstructions per-se, and I imagine that Ridley Scott himself would be amongst the first to tell you that this film isn't exactly the most accurate representation of the events around the siege of Jerusalem, but I did enjoy that sense of escapism back into a time where people's values and priorities were so different to the ones that we know today.

Yes, of course the film uses the historical setting to convey an oh-so-subtle and topical message about the futility and stupidity of waging a war over religion, and how Islam and Christianity aren't really so very different after all and why can't we all just get along.... but I liked being allowed to imagine myself for a couple of hours in a world where religion really was important in almost everyone's life, from most exalted king to lowliest peasant - so important, in fact, that they were prepared to leave everything behind and go to war in a desert, thousands of miles from home. Of course, the kings and nobles involved in this were probably also driven by other, more earthly motives, but piety would undoubtedly have been present even there, and don't forget that the First Crusade to the Holy Land - the "People's Crusade" - was made up mainly of peasants, women and children, and not the well-drilled Christian soldiers of popular legend.

I’m not religious at all, and I’m well aware of the balance sheet of atrocities that have been committed in the name of various Gods over the centuries. Even so, I am fascinated and sometimes moved by the sheer scale of this devotion. I am consistently awed by religious monumental architecture – cathedrals, mosques, temples and the like. I don’t believe in their Gods, but I still find the buildings themselves to possess an undeniable aura of calm and reverence. A big, Hollwood blockbuster like "Kingdom of Heaven" may not be the best place to seek an accurate reconstruction of events, but it was enough to prickle the historian lying dormant within me and to get me thinking about the original participants on both sides and to wonder about their motivations for spilling blood over Jerusalem.

The other reason that the film made me feel slightly nostalgic was because of the setting. At one point when our hero Balian is standing atop the battlements at Jerusalem and scanning the horizon, we get a clear view on the horizon of a line of snow-capped mountains. Now, I'm not an expert on the geography of the Holy Land, but it seemed fairly unlikely to me that this was a view you would normally expect to see from Jerusalem.... but it most certainly was a view of the High Atlas mountains in Morocco from just north of the Sahara desert. I know this because it is a view that I myself saw in early 2001 when we were travelling from Marrakesh through to Zagora before the start of our trek in the desert. It is a very barren landscape with a startling contrast provided by the Draa Valley, where the desert is cut by a river with a strip of vibrant green foliage for about 100 yards on either side. This is the site of the town of Ouarzazate, which is home to the film studios where Hollywood film most of their desert scenes: Lawrence of Arabia, The Jewel of the Nile, The Mummy, Gladiator, and ....of course... The Kingdom of Heaven. Now that was a fantastic holiday and Morrocco is a beautiful country with wonderfully friendly people. I'm sure Israel is a beautiful country with much to recommend it too, not least Jerusalem itself, but I'm equally sure that it's not somewhere that I want to be visiting in the near future. This is in part due to the instability in the region, partly due to the difficulty having an Israeli stamp in your passport can give you in visiting some arab countries... but mainly it's because I'm pretty certain that I don't want to be giving the Israeli state the kind of validation that spending my tourist dollars might give them.

Mind you, with that kind of thinking, I should probably be boycotting Britain too.

Incidentally, the Pollstar is travelling around the Middle East as we speak, and having passed through Turkey and Syria is just making his way into Jordan and, being an Indiana Jones geek (like all right thinking people), is getting very excited about seeing Petra.....
Posted by swisslet at 20:26

Email ThisBlogThis!Share to TwitterShare to FacebookShare to Pinterest
Labels: film, history and stuff, NOT music, travelling