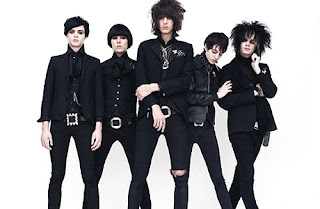 I know it's ridiculous that I should even be listening to rubbish like this, never mind rising to the bait... but I've just been listening to Radio 1's coverage of the NME Awards this evening. Only whilst I was driving home from the supermarket, for sure, but I was listening to it nonetheless. I don't really like the NME, and I don't really see the point of these awards, but it was quite nice to hear Nicky Wire talking about Manic Street Preachers winning the "Godlike Genius" award, followed by "Motorcycle Emptiness". Now that's a record that should be played on the radio a lot more often. I was just arriving home and not really paying any attention to the radio when Annie Mack mentioned that there hadn't really been any controversy... until Faris Rotter arrived on the stage.

In case you are lucky enough to be ignorant of who this talentless twat is, let me tell you that he is the singer with The Horrors (pictured above). They are a band who somehow managed to get themselves attention in the music press (yes, that would be you, NME....) in spite of the fact that they have absolutely no musical ability and absolutely nothing to say. They have released one 30 minute long album with precisely no redeeming features whatsoever, and yet somehow this naked emperor is still being giving the oxygen of publicity at events like this. As if there wasn't enough reason to dislike the man and his band, he also happens to have attended my old school. Yes, he's a public school wanker with a monied background playing at being a rockstar. Oh look at their amusing band names! (Spider Webb? Oh for fuck's sake. Is that the best you could come up with? It's hardly Rat Scabies is it? Faris Rotter? Like a 6 foot 7 streak of silver spooned piss like you has anything in common with Johnny Rotten...your father is a neurosurgeon for God's sake.)

Anyway. Our friend Faris was onstage to hand out the award for Best New Band. The award was won by The Enemy, whose album "We'll Live and Die in These Towns" is absolutely brilliant. As he handed over the award, Faris - the little tinker - decided to suggest that The Enemy were:

"True icons of british music. They're young, they're beautiful and they laugh in the face of natural selection".

The Enemy took it in pretty good spirit, but way to hand out an award, idiot. When asked about his comments, he suggested that he didn't think the Enemy had been offended (which they didn't look) because they wouldn't have understood the insult.

I realise it's pointless being annoyed by this, but The Enemy have achieved far more with one album than I think the Horrors ever will, but he still thinks it's somehow okay to slag them off as they collect their award, neatly ruining their moment and making it somehow about him.

The Enemy - Away From Here, Had Enough, Aggro

The Horrors - Sheena is a Parasite (see what they did with the title there?), She is the New Thing, Count in Fives

I rest my case: they're shit and he's a twat. It's about a whole lot more than wearing tight jeans and having big hair and a big mouth isn't it? Isn't it? No? Well it bloody should be.

Whitesnake and Def Leppard are touring together? Really? The dream ticket, together at last?

Is anyone else excited by that?