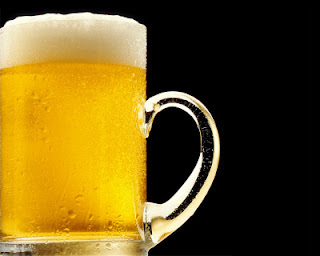 The cold that I've been enduring for the last week or two has had one slightly unexpected side-effect: I've stopped drinking. It's not that I don't want to drink, it's just that when I'm busy coughing and spluttering, a nice cup of tea is much more soothing than a pint of beer or a glass of wine.

I’m not a massive drinker by any stretch of the imagination, but I do like to have a drink and NOT drinking has made me realise quite how much it is embedded into my routine. It’s absolutely normal for me to have a glass of beer or wine – perhaps two – almost every night of the week. It’s just something that I do when I have my dinner. I generally won’t have more than one or two beers, and I’m not one of those people who finds it impossible to leave an open bottle of wine overnight, but I do like to drink and having an alcoholic drink with my dinner seems like the most natural thing in the world. I’m not really the binge drinker that I was in my youth either, but come a Friday or Saturday night, I think nothing of going out with friends and catching up with them over a drink. It’s always over a drink though, and I think the drinking I do with my friends is actually an integral part of the catching up. We go out and we drink steadily and talk nonsense until we go home. It’s now pretty rare – the odd night out on the cider excepted -- that I will get completely bladdered, but on nights like that, it’s probably not unusual that I will drink my weeks allowance of alcohol on a single night. This (mild) abuse of alcohol is an important part of my life.

I mention this as there has been some talk here recently about how alcohol consumption has been steadily rising thanks (apparently) to a combination of cheap and readily available booze and the extended licensing laws. Alcohol consumption has been rising steadily for the past 15 years, with figures suggesting a third of men and a fifth of women drink more than the recommended levels each week. Naturally, this is leading to all sorts of problems, ranging from an increase in the number of alcohol-related deaths (which have doubled since 1991), all the way though to drunken kids happy-slapping their way around our no-go area city centres, pissing on the streets and generally making a nuisance of themselves. Now clearly, I’ve not happy slapped anyone in my life and I don’t drink alcopops, but in some ways I don’t think that my attitude to alcohol is really a million miles away from those kids. I don’t call myself a heavy drinker by any means, but can I honestly say, hand on heart, that I give alcohol the respect it deserves? Do I consume in moderation and with caution? Do I think about the effect it has on my body and the effect my intoxication might have on other people? Not all the time. My hangovers seem to be getting worse as I get older, but they’re still an awfully long way from putting me off drinking for a great deal more than the time it takes my stomach and head to settle. It’s one of life’s little pleasures, and I’m not giving it up easily. Drink driving is something that is ingrained into my generation as being something that you just don’t do, but how many times have you woken up on a work day feeling a bit wonky and still driven to work? Serious alcohol abuse is clearly no laughing matter, nor is drink driving, but what is it about the British that allows us to take alcohol so lightly? In most other countries in Europe, people are apparently able to go out and socialise with their friends without feeling the need to have more than a couple of glasses of wine, or perhaps nothing at all. Do that in Britain and you are generally considered to be committing something of a social faux-pas. Here, it’s pretty much drink on drink on drink. We buy drinks in rounds, for heaven’s sake. That’s pretty much a commitment to have as many drinks as there are people in your party, and it also means that drinks will keep coming without you needing to even leave your seat. That’s a pragmatic way of making sure you get as much booze down your throat in as quick and efficient a way as possible.

Is this drinking culture all Tesco’s fault for selling cheap booze? I doubt it. I imagine it was here long before Tescos. Has putting the price of tobacco up made many people stop smoking? Nope. The simple answer is that alcohol is a drug and as a nation we seem to get an awful lot of pleasure from abusing it.

My own personal abuse preferences? Well, I generally like to have a nice pint or two of proper English beer: a Broadside or a Tanglefoot or something like that. On a hot day, I like a nice, cold glass of lager. A proper brewed continental lager by preference (Leffe, for example), but anything will do at a pinch. On a drinking session? Well, all sorts probably, but in the main I’ll settle on lager as it’s cold, relatively consistent in quality and pretty easy to drink. Over a meal? A nice glass of heavy red wine is best, but I am increasingly developing a taste for the zingy Sancerre or Sauvignon-Blanc type whites. I’m not a huge spirits drinker, but I do like a good malt – a peaty Islay malt ideally, but anything with a bit of bite. I’ve also discovered bourbons and I am a hearty advocate of Elijah Craig.