I've been running past this piece of graffiti down by the suspension bridge over the Trent now for several months. It wasn't until this morning that I finally happened to be walking past it and was able to take a photo.... 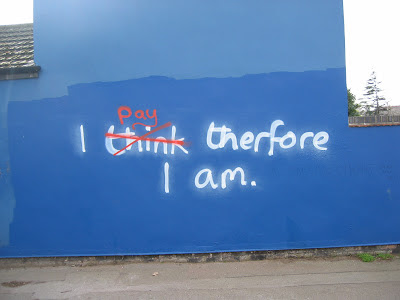 It's so nearly a wonderful piece of social comment, but is irretrievably flawed, and for some reason, John Cleese is called to mind:

Surely someone who writes a slogan like that on a wall knows how to spell? That's not just any old slogan, is it? To me it implies a bit of education (albeit the kind of education that says it's okay to write slogans on other people's walls). Do you think the artist stepped back to admire their handiwork, noticed the mistake but decided that to attempt to correct it would be worse than leaving it as it stood?

I'm pretty sure the effort is largely wasted anyway, and in a slightly juvenile way, I'm quite tickled by some bright spark's riposte, scrawled onto the wall in marker pen (click on the picture for a closer look). 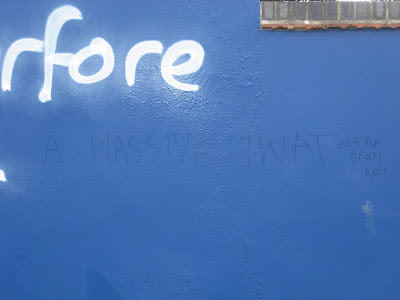 So this great piece of street art now reads, "I pay therfore I am. A MASSIVE TWAT".

No, I have no idea what the "ooh the gray PP!" bit means either. It's enigmatic and more than a little bit camp, I reckon.