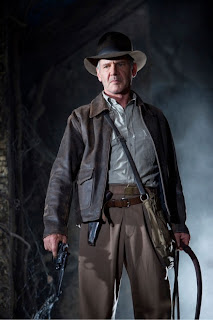 Indiana Jones and the Kingdom of the Crystal Skull.

[I've tried not to put any plot spoilers in this... but if you haven't seen the film yet, read on at your own risk.]

They say that they made it for love, but given that they've taken more than £150m in their first weekend, I should think that Steven Spielberg and George Lucas could care less what I think about the new Indiana Jones film. Then again, the Star Wars prequels took a grand total of $4.3b at the box office but probably caused untold damage to the reputation of George Lucas as a filmmaker and certainly to the legacy of the original films. "Indiana Jones and the Kingdom of the Crystal Skull" isn't that bad, thank God, but it's still comfortably the least entertaining of the four films.

Just like the original Star Wars trilogy, I grew up with the Indiana Jones films. Just as I remember queuing in the rain outside the old Electra cinema in Newport Pagnell to watch "The Empire Strikes Back", I can remember being taken to see "The Temple of Doom" whilst on a visit to Plymouth to see my grandparents. These films are part of the fabric of my childhood, and perhaps this makes me ill-placed to judge the merits of the new film from anything approaching an objective standpoint. Then again, how many people in the world are coming at this without a hint of subjectivity? The whole premise of the film trades upon our recognition of the lead character and his trademark whip and fedora. If the film makers are prepared to trade upon that recognition, then I think they have to be prepared for the film to be judged in the context of the original films. How could it not be?

For me, the magic of the Indiana Jones films comes from the fact that whilst our hero was brave and undoubtedly responded heroically to the situations he found himself in, he was always barely in control of events. He was flying by the seat of his pants, lurching from one disaster to the next, and we loved him for it. There is a duality at the heart of the character: he is both Henry Jones Jr, a teacher and he is Indiana Jones, adventurer and grave robber. You cannot view either aspects of his personality without seeing the other, neither the professor with his class nor the adventurer with his whip. Harrison Ford played this perfectly, taking away some of the cocksure arrogance of his portrayal of Han Solo, and replacing it with a more believable vulnerability. This was a hero who would be dragged under trucks in the pursuit of his goals, but who would have the bruises and the scars to show for it, and who would go back to his classroom to instruct another class of students to read chapter four of Michaelson.

Although I tried not to build it up too much in my head, I was still really looking forward to the new film. I'd read that Harrison Ford had insisted that the character had aged as much as he had in the 19 years since "The Last Crusade", and that seemed eminently sensible to me. Sean Connery looked foolish in that toupee in "Never Say Never Again", but this was less down to the wig itself as it was the fact that he was patently trying to play a character 20 years younger than he was. I quite liked the idea of revisiting a hero several years on and putting him in situations where he perhaps wasn't quite as physically capable as before. It added a new angle to the story. As long as they picked the right script, then this could be good. Well, they waited nineteen years for that script, and so I assumed that this must be a corker, otherwise why would you bother?

Or are we back to that £150m opening weekend again and the money that will continue to pour in when the DVD is released....

I don't think that "Kingdom of the Crystal Skull" is a bad film by any means, I just think that, somewhere along the line, Lucas and Spielberg forgot the ingredients that made Indiana Jones so charming in the first place. Some of the supporting characters are no more than ciphers (step forward Ray Winstone, Karen Allen and John Hurt), but t'was ever thus. What's more seriously wrong is what they've done to the lead character. LB quickly put his finger on it after we watched the film on Thursday evening: this time around, Indy seems to know all of the answers immediately - there's very little thinking or puzzling over clues, and certainly not as much bumbling into secret switches and triggering hidden traps as we used to get. Now we get the answer almost as soon as we see the problem and then we're quickly onto the next scene. There's some mention to his advancing age at the beginning of the film, but we soon move on from that and we're back to what the film makers hope is business as usual... the action. This time around we get a lot more reliance upon overly convincing CGI, and a lot less use of old tricks to avoid the use of the special effect (do you remember Karen Allen in "Raiders of the Lost Ark" bashing the guy over the head with a saucepan? We don't see her doing it - we only see him following her into a doorway, hear a loud "clang", and then see his body falling out...). That's what Spielberg proudly used to say made the Indiana Jones films more like the old action serials of the 1950s and less like a modern action movie. All of that seems to have gone by the wayside. Instead of the real snakes, real insects and real rats of the original three films, we get meticulously but obviously CGI-d ants. It's all very impressive, but the effect just isn't the same, and for me the director has taken the easy route instead of working his way out of a problem by using a bit of flair and imagination. One of George Lucas's biggest failings with the Star Wars prequels was that he was seduced by the computers at the expense of spending time working with, and providing direction for, his real actors. Whilst it's not quite as bad here, and Spielberg usually provides a much surer directorial touch, some of Harrison Ford's acting in this film is shockingly wooden - he actually looks and sounds in places like he's reading his lines off a big board. I know he's not the world's best actor, but I can't recall seeing him being quite this bad before. The film is also a touch overly sentimental too, with lots of backwards references to characters and events in the last films, as if too much time has passed since the last film and the continuity of the lead character isn't enough to tie this film in with the landscape of the other films. 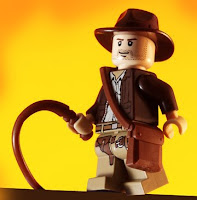 And then we have the plot. I'll spare you the exact details in case you haven't seen the film, but again, it feels like subtlety has been lost here too. The original films all relied upon a mystical premise at the heart of the script, be that the Ark of the Covenant, the Shankara stones or the Holy Grail. In all of those cases though, the mystical element was kept to a minimum until the payoff right at the end of the film as we focused on the quest. In the new film, the supernatural element is prominent right from the very first scene and is built up until a very CGI reliant finale. There's no subtlety here, and little room for mystery or suspense in the storyline, and it's fairly obvious right from the scenes in Nevada where this plot is going to take us. That's not necessarily a problem, and there are still some memorable and entertaining scenes along the way, even if the film is too long. The real issue for me is that the last twenty minutes of the film, the big-pay off, the big set-piece, is a huge let down. The effects are okay, I suppose, but frankly, it's all rather silly. To exaggerate only slightly, if Jar Jar Binks himself had turned up, I wouldn't have been all that surprised. George Lucas's fingerprints are all over this storyline, from the hot-rod and the diner scenes that could almost have been taken from the "American Graffiti" cutting room floor all the way through to the ridiculous and mostly nonsensical ending.

As I reflected last night after my second viewing with C, this is not a bad film per se, it's just - that for me at least - it was tremendously disappointing in the light of what had come before. Everyone will make a huge amount of money out of this, no doubt, and there's already been talk of another sequel, but I for one hope that they decide to leave well alone (although Ford has announced he is game, and apparently George Lucas has had an idea... heaven help us all). Could they even hand the franchise over to Shia La Boeuf's character? Well, I thought he was actually pretty good in the film as Mutt (sporting a version of the same haircut George Lucas has been wearing for the last 50 years or so, but thankfully without that fussy little beard), but another set of films? No thanks.

Still, if you're remotely interested in the character of Indiana Jones.... then the chances are you're going to go and see it anyway, aren't you?

Quite right too, go and make up your own mind, even if the money you spend on your ticket will surely only help to persuade them into the folly of another sequel when they should probably have just left well alone in the first place...

Hell, I've paid to see it twice already.
Posted by swisslet at 04:41