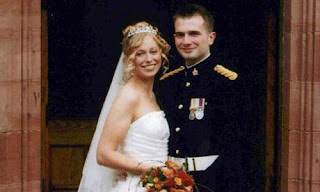 I see that the first British female soldier to be killed in Afghanistan has been hailed by her husband as a hero. Carl Bryant, a corporal in the Intelligence Corps, said:

"Although I am devastated beyond words at the death of my beautiful wife Sarah, I am so incredibly proud of her. She was an awesome soldier who died doing the job that she loved. My wife knew the risks, she was there because she wanted to be, and she wouldn't have had it any other way."

"There are so many people both in the military and locally where she grew up that are not only going to be touched by this but also devastated at the loss of such a beautiful girl. Nothing much seems to have changed since the days of Churchill's famous speech. Never have so many owed so much to so few.

She was killed by a roadside bomb alongside three other British soldiers whilst supervising a checkpoint manned by Afghan police, just east of Lashkar Gah. Their deaths bring the total of British servicemen killed in Afghanistan to 106 since the US led assault in the wake of the 9/11 bombings in 2001.

"They have made the ultimate sacrifice, laying down their life alongside those of their comrades in pursuit of the aim of a peaceful and stable Afghanistan."

Look. I don't want to take any comfort away from her husband and from her family: Sarah Bryant's death and the death of her colleagues is certainly a tragedy. But was she really laying down her life in the name of some greater good? I can understand that her family want the death of this woman to mean something, but what has it achieved really? What have the deaths of any of the other 105 British troops achieved? What have the deaths of any American or Taliban soldiers or any of the civilians caught in the crossfire in Afghanistan really achieved? Or in any other pointless skirmish around the world in this unwinnable "War on Terror".

Nothing. It's just more dead people in the name of another spurious cause. Their deaths mean nothing except misery for the people they were close to.

You can't defeat Terror. It doesn't have a flag and it doesn't have convenient national borders or a tinny, overly-long anthem they play before football matches. You're as likely to find Terror in a cellar in Austria or in Jersey as you are at a roadside checkpoint in Afghanistan, and I don't see us sending taskforces full of young and idealistic soldiers there.

Does anyone really think that the presence of our troops in Afghanistan, or in Iraq, or anywhere else are really likely to bring about peace and stability? Since when did soldiers armed with bombs and landmines and tanks really bring about stability anywhere? Even if you can enforce "peace" through force of arms, which seems like a contradiction in terms to me, at some point you're going to have to leave, aren't you? What then? Do you go home with your head held high and with any serious expectation that your hard-won peace and stability will actually last now that your guns have gone?

I have the greatest of respect for the troops fighting these battles. I don't think much of their career choices, perhaps, but I wish them well and hope they all come back in one piece. All of them. On every side. But really, isn't it time that we stopped doing this?

What a waste. What a terrible waste.

As a species we fancy ourselves as being something pretty special, don't we? At the end of the day though, we just keep on proving that we've learnt fuck all in several thousand years, except perhaps how to kill people more efficiently. Of course, nowadays we prefer to think of our wars as being less about conquest and more about freedom and justice, but at the end of the day, they're still wars and people still die.
Posted by swisslet at 22:34