And, Michael, you would fall and turn the white snow red as strawberries in the summertime....

More things to do to fill your time whilst you're kicking around at home: buy an Apple Time Capsule, attach it to your wireless network and work out how to shift your iTunes library so that you can still access it online but somewhere with a bit more headroom than a creaking laptop hard-drive.

That's sucked up most of the afternoon so far, and I haven't even started a back up using Time Machine yet....

Eye news: prickly, dry and sore today. I'm trying very hard not to worry too much about the fact that it's still a touch blurry at the moment. My rational brain is telling me that it's barely 5 days since the surgery and, apart from anything else, the sutures will be pulling on my cornea and inducing a partial -- but temporary -- astigmatism.... I know I need to be patient, but it's difficult not to worry about these things. I'll ask the professor on Monday when I go back in for my check up and, if all is well, the operation on the second eye. I'll also have to ask him if it's normal for my pupil to now be slightly smaller in low light conditions than the one in my right eye. This doesn't especially bother me, and it may well be related to the steroids I'm putting into my eye at the moment, but it's probably best to ask, eh?

I also had confirmation today that my medical insurance will also be covering the second procedure in full. This is a bonus. I was fully expecting to pay for both of these operations myself - to the tune of several thousand pounds. In fact, I didn't even think of checking. I've seen my neurologist at the hospital where I'm having the operations done, and those consultations definitely were covered by my insurance. Apparently the hospital didn't want to wait to see if I was good for the cash, they already had my insurer's details and just went ahead and checked for themselves. The first thing I heard about this was the confirmation that I was covered in full. The money was never the most important consideration in all of this, but not having to pay for it at all is a definite result..... the bastards are ripping me off to the tune of £90 a month to cover the WT's as it is, so it's good to get something back out of them.

Now, before I go and tackle my backup strategy....

> Nine in the Afternoon - Panic At The Disco

Not as good, in my opinion, as "I Write Sins Not Tragedies", but not many songs are. They've dropped the exclamation mark and appear to be trying to distance themselves from the emo scence... but this is still a naggingly effective pop song.

LB's most recent post has not only got me thinking about an artist's right to the interpretation of their work, it's also managed to plant this song into my head. They're certainly not cool, and it's very easy to mock them, but this is a great song. For the record, I think that the right of interpretation belongs to the individual experiencing it. The artist can tell you what it means to them, but they can't tell you what it means to you. Read LB's post (and the comments) for more details. Good record though.

> Keep Me In Mind Sweetheart - Isobel Campbell and Mark Lanegan

The odd couple. Beauty and the Beast. Weird and weirder. Whatever you want to call them, there's something very appealing about the combination of Isobel Campbell's ethereal, floating voice and Mark Lanegan's whisky soaked croak.

Simple rock song by my favourite band of the moment. What's not to like about that chorus?

This song simply could not have been done by anyone but the Boss, either from a lyrical point of view or in the way that the song builds pace and drama to a climactic mix of sax, piano and guitar. Plus "You ain't a beauty, but hey, you're alright" is a real doozy of a line.

> And I Was a Boy From School - Hot Chip

I've finally got around to buying some of their stuff, and perhaps it's not the obvious choice from their back catalogue ("Over and Over" anyone?) but this is the song that won't leave me alone. I love their air of melancholy.

Johnny Greenwood got a lot of plaudits for his soundtrack to "There Will Be Blood", but it's the use (twice) of the final part of Brahms' Violin Concerto that is the most striking in the film. I'm no fan of classical music. In fact, I'd go as far to say that I am startlingly ignorant of it. Even I cannot fail to be moved by this wonderful piece of music though. Shame the film didn't really match up to it. I'm not much of a Day-Lewis fan to begin with, but I thought the whole thing was fairly over-wrought and fell apart into nonsense in the last twenty minutes. But what do I know?

I won't go on about this, but I love this song. Every time I hear it on the radio, I stop what I'm doing, turn up the volume and have a good listen. Fantasic lyrics coupled with a lovely uplifting coda.

A classic slice of geek rock from Weezer, coupled with a killer homage to YouTube in the video. Superb band.

I'm not sure how I would describe the sound of this band. Hmm. Here goes: imagine the harmonies of Crosby, Stills and Nash, together with snippets of Simon and Garfunkel, coupled with a baroque chamber choir. Got it? Well that's what I think Fleet Foxes sound like. I love it. Even the title of this song makes me think of the Middle Ages, never mind the fact that the artwork on their album is the magnificent painting "The Blue Cloak" by Pieter Bruegel the elder. 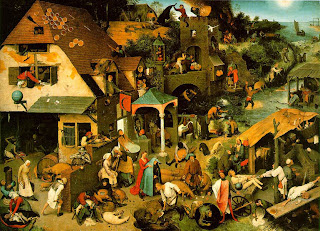 It's one of those pictures that rewards a really close look (like most of Bruegel's work). Every time I look at it, I find something new. Kind of like "Where's Wally" painted by one of the European Old Masters. The music oddball, or at the very least offbeat....but all the better for that.

Right. Have a good weekend y'all.
Posted by swisslet at 17:53