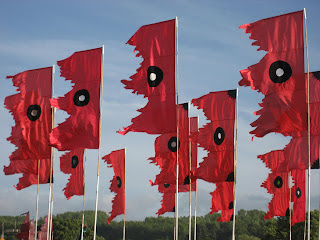 -> getting onsite early enough on Wednesday that we got the pitch we wanted, and leaving early enough on Sunday that it took us 6 minutes to get out of the car parks (my personal record is something like 7 hours...)

-> Serving my friends with a freshly made mojito each once the campsite was up. They had ice, fresh mint and everything..... it was a bit of a pain in the arse to make them, stick them in a flask and then transport them with the ice and things, but it was such a gloriously satisfying moment in the early evening sunshine on Wednesday as we contemplated the festival before us. A perfect Glastonbury moment. 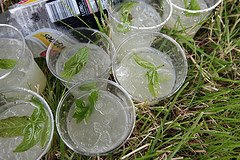 -> The food. So much gloriously enticing food and so little time in which to sample it all. My favourites this year were the goat curry I had near the entrance to the Green Fields (wonderfully spicy and with bits of bone and things all stewing up in a great big pot) and the 1/4 rotisserie chicken with chips I acquired near the John Peel stage (impractical to eat in a crowd and very messy, but it was absolutely delicious).

-> Being awoken at about 05:30 on Thursday morning to a loud conversation going on amongst a group of kids camped just near to us. It was certainly very early, but it was also very amusing. Something along the lines of: "I've been sick all over my best trousers! I'm can't wear them now, they're all covered in sick. My mum will be so disappointed. She told me not to bring that bottle of Baileys.....". They spent most of the rest of the weekend sat in wheelbarrows around their campfire looking really, really frazzled. Happy days!

-> Burrow Hill dry cider from the cider bus, especially when they had some ice around. Brothers pear cider is okay, I suppose, but it's got nothing on this rocket fuel. 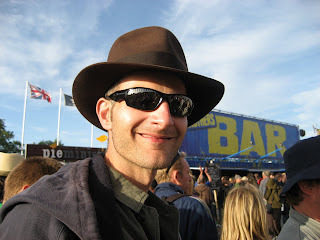 -> My Santa hat. I originally bought this onsite a few years ago to serve as both a warm hat and a beacon for people to find me in a crowd. In both of these things it has been of great service. An unexpected benefit, however, is that it seems to encourage total strangers to engage me in (often very surreal) conversation. Highlights this year included the pretty Spanish barmaid asking if she could submit her list (she wanted a house on the south coast of Spain. I told her I'd see what I could do); the guy in the urinals who asked if for Christmas I could make his knob bigger when he was on drugs so that he would be better able to find it (he said he hadn't been a very good boy this year so far, so I told him he had six months to try and turn things around) and the guy who offered me 5 pills in exchange for the hat during Jay-Zs set. When I refused, he cheerfully wished me a happy christmas and gave me one (swiftly discarded) pill before moving on. 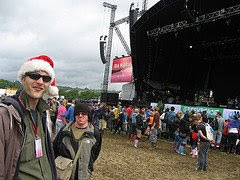 -> sippin' bourbon with my friend Statue John whilst watching the Kings of Leon on the Pyramid.

-> Shiraz Saturday. We started at Shakin' Stevens on Saturday morning, and were still going late into the night. Classy, eh?

-> "This Old House". Watching Shaky perform his best-loved hit from the very front of the Pyramid stage. When he announced that he was going to be playing material from his new album, the groan from the crowd was audible, but he's an old pro and it was another brilliantly surreal Glastonbury moment to be standing there watching him perform live. I did feel sorry for the bloke who lugged a green door into the festival though.... he didn't play it. 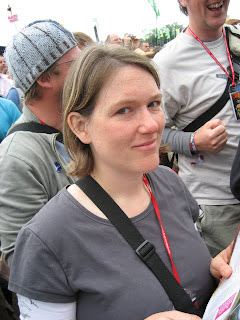 amidst all the dancing, someone's not at all sure about Shaky....

-> Hot Chip. I wasn't going to watch them, and I ended up dancing in a field. What more could you want? They were superb.... possibly the best act I saw all weekend.

-> Jay-Z. I decided to go and see him on the basis that it was exactly the kind of show that I would never pay to watch. The Pyramid was absolutely rammed and Jay-Z slayed it. He opened with *that* video clip of Noel Gallagher and then launched from a huge sing-a-long to Wonderwall into an absolutely smoking version of "99 Problems". We were eating out of the palm of his hand, and he just wasn't able to keep the smile off his face. Brilliant show.

-> Standing at a urinal in the Pyramid field as Leonard Cohen played in the background and a bloke turns to me and says "Cheery, isn't he?". Hard to argue that, although Lennie was performing his songs with a massive smile on his face that somewhat belied his reputation, and who wouldn't be thrilled to hear some of his magnificent songs played live? 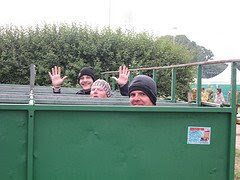 -> going to the Greenpeace field on Sunday morning and finding that there was absolutely no queue for the hot, solar powered showers. Blissful. The edge was somewhat taken off the experience by meeting up with C afterwards and finding out that many girls on the ladies side were ignoring the requests to only use the ecological shower gel provided and were taking the opportunity to get out shaving foam and razors and to shave their legs, armpits and crotch. Is that really necessary? Can you really not see out the one day of the festival remaining before having a trim? Honest to God.... The blokes? We mainly just washed our bits and left.

-> Tony Benn. He's 83 years old now, but he remains an inspiration. I saw him speak at the Leftfield on Sunday afternoon, and he was better than ever. He oozes common sense, and the nugget from the Public Services Union on the stage with him should watch and learn instead of firing his mouth off.

-> Billy Bragg. He's a festival tradition for me, and this year I saw him three times in all. Once in the Guardian Lounge performing cover versions about rain by people like Tom Waits and Jackson Browne, once speaking at the rally in the Leftfield with Tony Benn (talking utter sense about how to combat the rise of fascist parties in places like Barking) and, of course, in his traditional slot in the Leftfield on Sunday night. All round legend, if you ask me. And he played "The Milkman of Human Kindness", "Tank Park Salute" and "St. Swithins Day" this year, too.

-> The huge and painful hike from the car park to the campsite. It never gets any easier.

-> The rain. In the end it wasn't too bad and only rained for about 12 hours and we only needed to wear our wellies on Friday.... but there's something incredibly depressing about sitting in your tent listening to the rain pounding down and contemplating the next three days slogging through the sludge. It was nothing like last year, and actually ended up being a pretty sunny festival.... but it's so much nicer when you can sit down on the grass and bask in the sun.

-> Whoever stole one of our chairs from our campsite. It's not that they're expensive or that it was especially inconvenient, but I loathe the idea of people roaming around other people's tent looking for a chair to steal for the day. We actually saw some guys doing just that a bit later on: checking to see if a campsite and wandering away if they saw anyone sitting there. Idiots.

-> The mess. The slogan for this year's festival was "Love the Farm. Leave no trace". Judging by the amount of rubbish that was strewn around the site, and the way that people again just left whole tents and chairs and things lying around when they left, lots of people really don't give a shit. A particular low point was when it started to rain on Thursday evening, and the crowd collecting their free ponchos from the Orange tent were just discarding the cellophane wrapping and walking off. It's a culture that buys things cheap and throws them away when they've been used, and it's somewhat at odds with the environmental ethos the festival tries to foster. It was also a bit odd to take a massive pile of newspapers from our campsite to the information point (as instructed) for recycling, only to be told "Oh, just put them in the bin". 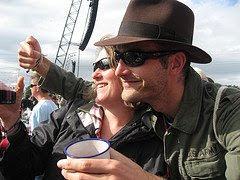 -> Coming away from the festival thinking that some of the bands were a little underwhelming and that I hadn't seen as much as usual. No one I saw was downright bad, but for some reason, bands like Vampire Weekend and the Young Knives in particular gave off an air of being pissed off with something, even when their sets seemed to be going pretty well.

-> Trying to get out of the John Peel tent after the Young Knives and having to to fight through the apparently vast crowd that was coming to see the Ting-Tings. Beats me.

-> Not spending as much time with all of my friends (or my wife) as I would have liked. Life is too short and there's far too much at the festival to see to be spending your time in front of something you don't like.... but it's sometimes good to just hang out with your mates, and I didn't do as much of that this year as I would have liked. I hardly saw some of our party at all. 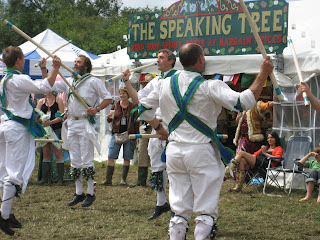 -> Having to get back home early on Monday so that I could wash up, change and get away to go to a work dinner thing in Leicester. The dinner and speeches and things were okay, I guess, but talk about coming to earth with a bump. And I didn't get that early night I so desperately need.....

...and now the really important stuff.

It's such an important part of my festival experience that I simply have to try and list out all of the things that I ate over the course of the time I was down in Somerset.....

So, as best as I can remember and in no particular order:

things I didn't have enough meals to eat: sushi in the Park, noodles of any description but the ones at the Camden chinese near the Pyramid looked especially good, thai green curry from the place near the cider bus, a buffalo chili burrito, jerk chicken, merguez sausages.... next time, eh? 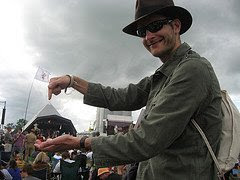 Friday: Ida Maria, The Rascals, Vampire Weekend, Lightspeed Champion*, The Young Knives, We Are Scientists, The Enemy, Kings of Leon

* I hated this: a whole lot of self-absorbed, melodramatic, self-important schoolboy whining. "Oh, you looked at me funny and now I'm going to kill myself". On the other hand, he did play the Imperial March and the Main Theme from Star Wars, so....

Bands I'm a bit sorry I missed: The National, Massive Attack, Franz Ferdinand, Last Shadow Puppets (both the last two were 'secret' gigs in the Park, but although I knew they were on, I simply choose to be elsewhere. Next time, maybe?), Jimmy Cliff, John Cale, Seasick Steve, The Raconteurs, White Denim**... but you can't see everything, can you?

** playing The Social in Nottingham next week, as luck would have it - so I get a second chance.

...and of course, I saw literally hundreds of other bands in passing as I walked around the festival site.

So. In short, another excellent few days spent in the company of some good friends and a hundred thousand or so strangers. Marvellous. Cheers to the absurdly optimistic (certainly when it comes to predicting what the weather is going to do, anyway...) Michael Eavis for putting up with us all again.

Same time, same place next year?
Posted by swisslet at 18:33

Email ThisBlogThis!Share to TwitterShare to FacebookShare to Pinterest
Labels: glasto 2008