forget it brother, you can go it alone.... 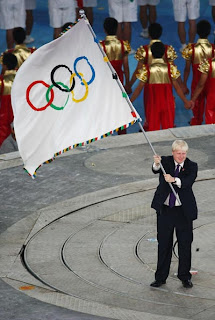 No sooner did Boris Johnson, the Mayor of London, receive the Olympic flag at the Ceremony to close the Beijing games, than the carping began. Or rather continued, for even though there was widespread delight when the games of the XXX Olympiad were awarded to London in July 2005, the sniping and cynicism was never very far behind. I listened to a phone-in radio programme over the weekend where caller after caller was ringing in saying what a disgraceful waste of money the Olympics was, how vast and unjustified sums were being invested in white elephant stadia and on the athletes themselves, how we were going to embarrass ourselves before the eyes of the world.... On the back of a games that has been notable for the success of the British team, it takes a special kind of pessimism to think like that. A very British kind, you might say.

As the Olympic Torch was extinguished in the Birds Nest Stadium in Beijing, London officially became the Olympic city, and the countdown to the games really began: 1431 days and counting. A modest eight minute segment amidst the fuss and fireworks of the closing ceremony even granted us a glimpse of how London will attempt to follow the conspicuous expenditure and ruthless efficiency that so marked the Games in China. We saw a slightly scruffy and bumbling mayor chuckling to himself at the enormity of the expectation, a queue of conspicuously ethnically diverse commuters with umbrellas waiting for a (presumably late) red London bus, we saw our Olympic gold medal winning cyclists dressed in suits riding on bikes with their briefcases, we saw the winner of a reality TV singing contest performing with an extremely sweaty rock legend and, praise be, we saw David Beckham in a horrible black leisure suit hoofing a football into the crowd. It was quirky, a touch chaotic, but it felt warm, humourous and welcoming and was a very welcome contrast to the drilled, military precision of the Chinese. We certainly won't match the Chinese for conspicuous expenditure, but hopefully we can deliver a games with a soul and an awareness of their own absurdity. Besides, I'd take "Whole Lotta Love" over over choreographed nonsense any day of the week.

I fear there's a whole lot more moaning to come yet. I watched a bit of the celebration party in London that took place after the closing ceremony. It was all a bit overly sponsored (it was a "Visa Party" apparently) and low rent, hosted as it was by the broadcasting collosus that is Claudia Winkelman and featuring as it did acts as stellar as the cast of "We Will Rock You", Sophie Ellis Bextor, the Feeling and Scouting for Girls. Ah, Scouting for Girls, bless them, decided that this was the perfect opportunity to unleash onto the unsuspecting world their triumphant cover of "London Calling" by the Clash. Superficially, it's a great choice for a party to celebrate London's invitation for the world to join them for the games in 2012.... sadly, it's actually a very political song about social unrest and nuclear attack, presumably something that the London Games will be very keen to avoid. Changing some of the lyrics to celebrate our gold medal winners instead of referencing "yellowy eyes" probably didn't help improve the temper of those outraged Clash fans watching either. Yes, it was naff and yes, perhaps it was inappropriate.... but you can take this kind of thing too seriously, if you ask me. I'm sure this isn't exactly what Joe Strummer had in mind for the song, but I rather think he'd find it more funny than insulting. I know I did. How about we stop wasting energy moaning and fretting about how disastrous the 2012 games are going to be, and focus instead upon how good they could be, how they could be a glorious celebration of sport and of life and of Britain.

The games could be brilliant, if only we give them a chance to be.

My final thought on how the Olympic Games is about so much more than winning, comes from the experiences of a swimmer who finished 16th out of 24 in the 10km swim. Natalie Du Toit was ony 1m 22s off the gold medal winner's time, but if winning was everything, then she might as well have been a million miles behind and not have bothered at all. The thing is though, that Natalie Du Toit had her left leg amputated below the knee after a road accident in 2001. That she was there and competing at all is nothing short of remarkable, a fact recognised when she was chosen by South Africa to carry their flag at the opening ceremony

Britain seems to be breeding a harder type of athlete for whom a medal is not good enough unless it's gold: for every Bryony Shaw, delighted with a bronze there's a Kath Grainger, inconsolable after winning a silver. That kind of winning mentality is fantastic and a huge step forwards for a nation who revere plucky losers and who sometimes seem to find winning to be a touch vulgar. It's worth remembering that sometimes, as with the case of Natalie du Toit, winning really isn't just about finishing first.
Posted by swisslet at 15:56

Email ThisBlogThis!Share to TwitterShare to FacebookShare to Pinterest
Labels: more important than that