hey runner, what are you running from?

I was back at hospital today for a follow up on my eyes. It's now exactly 28 days since I had the operation to insert a lens into my right eye, my left having been done the week before that, and it was time to see what was going on in there.

You might remember that, a few weeks ago, I was busy fretting about the quality of the vision in my left eye. Well, apparently the antibiotic and steroid drops that I was prescribed to help with the healing process have the side effect of disrupting the membrane over the surface of the eye and thus have a negative effect on the quality of vision. You only use the drops for 28 days, so I stopped putting them into my left eye at the end of last week, and the quality of the vision in that eye has been improving ever since, to the extent that I have gained a whole line on the chart. Not bad. The quality in my right eye, the one that was noticeably better immediately after surgery, has been a bit more variable, but I stopped putting the drops in last night and I'm confident that it will get stronger and stronger with a bit of time. In any case, the professor tested my eyes this evening, and with both eyes together I can comfortably read the bottom line on the chart. That's one line better than either of my eyes on their own, and apparently an excellent sign that my brain is starting to adjust to the new balance of my eyes. Pressure was down too. It's all good.

My other big worry is the ghosting that I get in my right eye in dim light. It's absolutely fine during the day and most of the time at night (including night driving, thankfully), but I get a faint, but distinct ghosted double-image cast by some lights. It's not awful, by any means, but I notice it. And when I notice it, I focus on it. I mentioned it to the professor and he all but rolled his eyes at me. Apparently I have fairly large pupils, and the ghosting happens when my pupil dilates and approaches the edge of the implanted lens (which, as a rigid toric lens, is slightly smaller in my right eye than in my left). This is entirely to be expected and, I was told with a sigh, I just need to give my brain the time to adjust and tune out the superfluous images. It's not all that different to the way that a glasses wearer learns to tune out the unfocused image past the edge of the frame of their glasses. Indeed, apparently the same thing happens within the lenses of a pair of glasses, but your brain learns to only focus through the very centre of the lens. Apparently, so the professor told me, this only really bothers either the very intelligent or the very obsessive. I think that was a polite way of telling me to stop worrying about it and to let my brain work it out in its own time. I got the hint, anyway.

Oh, and he told me I could start exercising again too. I have to wait another couple of months before I can climb into the bacterial soup that is a swimming pool, but I can go running again. In fact, as soon as I got home, that's exactly what I did. C. asked me if I had missed running terribly during my enforced lay-off. The honest answer, as I had time to reflect as I dragged my sorry, complaining body around the Trent Embankment, is that whilst I might have missed being able to go running, I missed the actual running itself rather less. I like pies, I like cake, I like beer and I like sitting on my arse doing nothing an awful lot more than I like running. This is why I have to run. So I ran, and now I can hardly walk. It seems that all that walking I did when I couldn't run is actually no substitute for the real thing. Still, I did manage to lose weight during my layoff, so....

In other news, look who's coming to town! 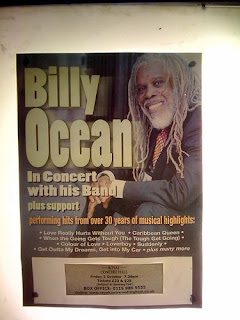 Looks like pastel coloured jackets with the sleeves rolled up are no longer a key part of his wardrobe, but he's a legend nonetheless.
Posted by swisslet at 19:17