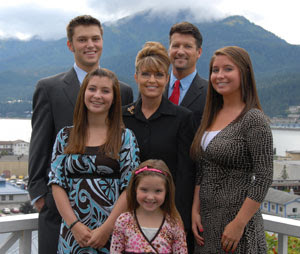 You can't choose your parents. Whatever her views might be on gun ownership, the NRA, teaching creationism in schools, the death penalty and drilling for oil in a conservation zone, your mom is still your mom. Besides, how could Track (19), Bristol (17), Willow (14), Piper (7) and Trig (4 months) fail to be proud of the fact that their mother has gone from 'hockey mom' to mayor to Governor to Republican Vice-Presidential candidate in a little over ten years? I certainly don't share her politics, but you have to admire the kind of determination and dedication that must have taken though.

It turns out that her 17 year old daughter, Bristol, is pregnant. Well, it happens (apparently about 1/3 of girls in the USA get pregnant before the age of 20, with 80% of those births "unintended").

Except, it's not really supposed to happen to the children of socially conservative politicians who have just been announced on the presidential ticket. Given that John McCain had barely heard of Palin before he announced her on his ticket, it seems unlikely that he knew anything much about this. Clearly though, it's not something that can be reliably hushed up for long, especially when she's apparently already 5 months gone and would be due to give birth in December...so it had to be announced. Of course, as Palin has been outspoken on this particular issue, there was only ever one way that this was going to go: her 17 year old daughter is going to have this child and will be marrying the father. As she said in a statement:

"Our beautiful daughter Bristol came to us with news that as parents we knew would make her grow up faster than we had ever planned. As Bristol faces the responsibilities of adulthood, she knows she has our unconditional love and support. Bristol and the young man she will marry are going to realise very quickly the difficulties of raising a child, which is why they will have the love and support of our entire family."

Of course, Republicans are now working very hard to make it look as though this is a private family matter and very little to do with the Presidential election at all, which of course it shouldn't be. But then again, and no matter what they say to the contrary, it does at the very least ask questions about just how carefully the McCain camp vetted their choice of Vice-Presidential candidate. What other skeletons has she got in her closet that the press will duly rake up? We've heard about the pregnancy, we've heard about her alleged attempt to get her brother-in-law sacked from his job as a state trooper for attempting to divorce her sister. Hell, we've even heard the rumour that Bristol is already a mother and that Palin is in fact the grandmother of her 4 month old son Trig ... (this last one seems a bit fanciful to me: if Bristol is really 5 months pregnant, then suggesting that she's also the mother of a 4 month year old seems biolgically unlikely to me....but perhaps that's all part of the cover-up?

Actually, in all this, the person I really feel for is Bristol: I don't know what her own views on abortion are and I certainly don't know how she feels about this pregnancy or about the father of this child. What I do know is that her views on those subjects are unlikely to have been given much consideration in all of this. She got herself pregnant and the only way her mother can come out of this with her political ambitions intact is if she has the damn baby and she marries the damn father. To hell what she thinks.

Poor girl. She's seventeen years old and she effectively has no choice over her own life or over her own body.

I've seen Sarah Palin being referred to as the VPILF. Can you imagine? Urgh. No thanks. I don't care what she looks like - I find those kind of views unpalatable. Family values my arse. I wouldn't touch her with yours.... 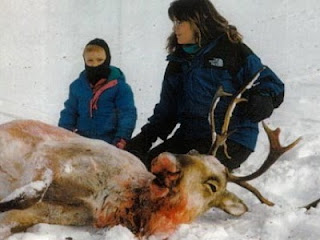 And by the way, is it not insulting of McCain to think that simply by picking a woman to join him on the ticket, all of Hillary Clinton's 18m apparently disenfranchised voters will come flocking to his standard? Is gender the only important issue here, or does he not think that those female Democrat voters may well have their own views on abortion, creationism, global warming, gun ownership and the like which they may consider more important?

Whilst we talking about US Politics, let me just say again that I think Bill Clinton is great:

"People the world over have always been more impressed by the power of our example than by the example of our power."

That's some fine speechification you got there, Billy boy.
Posted by swisslet at 18:51