let me stand next to your fire... 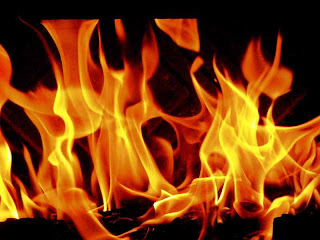 The first time that I looked around our house, after we had arranged our intial "viewing" with the estate agents, the very first thing that I noticed was the gas fire in the dining room. Obviously we'd be getting rid of that at the first opportunity, I thought. As is the way of these things, I did not do a damn thing about it until about three years later, when I finally got a gas engineer round to take it out and cap off the gas supply. It turned out that the old back boiler was still in there too, so that had to be taken out as well, leaving a gaping great big hole. Initially the hole was home to a church candle, but when we got the cat last year, we found it a pretty convenient slot for the pet carrier, having the dual benefit of being just the right shape to store it and at the same time preventing the cat from having a pee on the newspaper that lined the floor at the base of the chimney (as she occasionally did when she was a kitten). Well, it might have been a lurid shade of purple, but it was behind the dining room table anyway, so I didn't even really have to look at it, so....

There was a similar, albeit slightly smaller hole in the living room too. A poorly capped gas outlet revealed that there had once been a gas fire here too, but it had been removed at some point but never replaced with anything much. There was a nice polished slate mantlepiece here and some Victorian-style tiles around the fireplace, but there was no grate and the chimney was blocked rather crudely by a pillow that had been shoved up there at some point to cut out the drafts. We put some candles here too, and I stacked my old newspapers here in a pile before taking them out to the recycling bin.

Today, some five or six years after we originally moved into the place, we've finally had them sorted: both gaping holes have had grates added and, by the time I get home, should have been converted into proper, honest-to-goodness, fully functioning fireplaces. The gas-fire related metal caps on the chimney pots and metal linings in the chimneys have been removed, and should be all ship-shape and ready to lay a roaring blaze (using smokeless fuel, obviously. We're very much in a smokeless zone around ours, and all the better for it, I'm sure).

It's just about perfect timing, really. We're still technically in British Summer Time, but the sun, if it can be seen at all, is sitting very low in the sky, the nights are drawing in and it's been generally pretty miserable and cold for several weeks now. Yesterday we switched the central heating back onto timer for the first time in six months. All in all, I'm very much looking forward to curling up with a good book in front of a real fire. There is nothing quite so soothing to the soul as a cosy fire after another hard and pointless day in the office, don't you think?

Mind you, I'm fairly cold blooded and my metabolism is stoked up so high that I am perpetually cold even though my body is usually producing enough heat to boil a kettle. We had a new boiler installed the other day [WQ counters take note: A-Rated and 90-odd percent efficient, no less] and we are now the proud owners of a thermostat. As such, I am fully expecting that every day of winter will be a battle of wills with my wife as I turn the temperature right up every time I walk past, and likewise C will turn it back down when she passes by. If it was up to me, I'd have the heating on almost all year if I thought I could get away with it, and frequently have to wrap myself up in a fleece on the mildest of evenings. I've got a cupboard full of thermal base layers, and I run in them all through the summer, no matter what the temperature is outside. I was so cold on Monday evening I even dug out the beautiful wool djellaba that I picked up in Morrocco and wandered about the house with the pointy hood pulled up, looking for all the world like some kind of suburban jedi knight going about his domestic business.

So the thought of coming home to a nice fire??

.....assuming any of the heat gets out into the room past the cat, that is.

[* actually, and rather disappointingly, it turns out that we can't have a fire tonight after all. A quick chat with the fireplace people and apparently they've measured the grate wrong and haven't finished with the chimney pots yet, so we'll have to wait until next week. I might have to get my djellaba out tonight again after all....so if you're passing my street tonight, do look out for the sight of a mainly kitchen based Obi Wan Kenobi-alike preparing pasta with roasted vegetables and chorizo*]
Posted by swisslet at 18:59