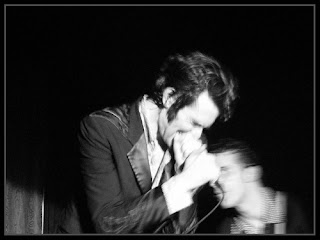 I was first introduced to the Jon Spencer Blues Explosion at some point in 1994, when a friend played me "Extra Width" and I was taken aback by this raw, urgent sounding three-piece who seemed to have nothing less than a force of nature as a frontman. Barely a song seemed to go by without Jon Spencer screaming out "Blues Explosion!" or "Yay-ah!" between lyrics like some kind of demented Elvis impersonator caught up in the sheer joy of the noise his band were making. I thought they were great, and they certainly packed a hell of a punch musically. I never quite got around to seeing them live (these being my gig-attending wildnerness years), but I always rather fancied that this is where the band would make the most sense, with sweat pouring down the walls and a small, urgent crowd united by this sparse, basic and yet muscular rock music.

And so, when offered a "plus one" ticket by the Evening Post's redoubtable gig reviewer (thanks Mike), I jumped at the chance to see Jon Spencer and his new (to me anyway) band playing in the pleasingly tight confines of the Bodega Social.

First up were the Danish band, PowerSolo. They're another three-piece, and I think it's fair to say that it's not terribly hard to pick out their major influence.... they're a hillbilly, rockabilly version of the Blues Explosion. This, of course, is no bad thing, and the band make a very pleasing noise indeed. The drummer and first guitarist are relatively staid and focused on the music, but the singer... well, the singer is something else entirely: for starters, he has the mildly demented look of someone with an only very tenuous grasp on sanity, an impression which is readily reinforced by the glimpse of the huge tattoo on his chest, just visible through the open buttons at the top of his shirt. He gurns and he stares at the crowd, barking into his microphone and then, perhaps a little optimistically, asking us to step forward. We shuffle up a couple of steps, but are soon shrinking back towards the wall when he takes matters into his own hands and jumps off the stage with his guitar to work his way through the audience, at one point using the guitar as a sort of geiger counter, scanning people in the crowd and plucking out the appropriate clicking noises. He's a touch scary, but the band are tremendous value during their thirty minute set.

After packing up their own kit, PowerSolo are soon back on stage as the backing band to Heavy Trash, with the singer now taking up a double-bass. They are soon joined by Matt Verta-Ray (once of Madder Rose) and Jon Spencer (of Pussy Galore, Blues Explosion, Boss Hog and R.L. Burnside's backing band, amongst numerous other projects). Spencer straps on an acoustic guitar, but it's soon fairly apparent that little has changed in his musical world. The roots of modern rock music are pretty well established: the blues led to rock and roll, rock and roll led to punk and metal and on we went into modern rock music, with the perfection of the form arriving with Coldplay (*ahem*). Jon Spencer is a man who seems to have made this journey in reverse: he started out with the gonzo garage punk of Pussy Galore, went on to the bluesy rock grooving of the Blue Explosion, and now with Heavy Trash he appears to have gone even further back still to the golden rock and roll years of the 1950s. Looking at Jon Spencer, with the brylcreemed stack of hair on the top of his head (looking distractingly like a weird hybrid of Javier Bardem, Nathaniel Parker and Trigger from Only Fools and Horses), it's not hard to imagine him and his band sharing the bill with Jerry Lee Lewis, Elvis Presley, Buddy Holly and Johnny Cash on one of those all-star package tours that used to work their way around the USA, playing their latest hit singles to packed out crowds in small town theatres. Indeed, Verta-Ray readily admits that he grew up in Canada listening to old records almost exclusively, idolising Johnny Cash and ignoring modern music almost entirely. Indeed, he plays a Gibson ES-295 guitar in homage to Scotty Moore, Elvis Presley's guitarist. This music is the blues, it is rockabilly and it is early rock and roll. In itself, it is not terriby original. What lifts it up and makes it somewhat more interesting is Jon Spencer himself. Spencer is a dynamo; even when hidden behind an acoustic guitar, it is his heavily reverbed yelps and moans and screeches that lift the band and make them somehow more than the sum of their parts. This is made abundantly clear when Verta-Ray takes on vocal duties for a single song: it's pleasant enough, I suppose, but it really serves to emphasise what a live-wire presence Jon Spencer really is and how vital to the band. Without him, this band would be nothing much. With him, they are almost elemental. They're not really moving music forwards, but when heard live, this music makes sense and also makes you want to jerk about manically and to shout out "YAY-AH!" with Jon Spencer (who now shouts "HEAVY TRASH!" between lyrics, obviously). The band are tight too, and they need to be to keep up with Spencer and his almost completely incomprehensible and yet somehow heartfelt sermons to the crowd that suddenly burst from a low chugging backdrop to a frenzied whirl. It's tremendous fun, although Spencer does look as though he takes this nonsense very seriously indeed. At times Spencer almost reminds me of Jack Black, such is his larger than life, manic stage persona. For him though, I suspect, this music is no laughing matter.

They play for 90 minutes, and they are pretty rapturously received by a somewhat mixed crowd, containing as it does Brylcreemed and booted Jon Spencer-alikes, a goth with Robert Smith hair, a bald guy in a Cramps jacket, some Stray Cats fans, a guy with Iron Maiden hair, skin tight jeans and white trainers, and some young chaps working a look that seems to mainly involve tiny hats perched right on the back of their heads.

An entertaining evening, although I do wish that I had seen him play with the slightly harder-edged Blues Explosion.

Here's some clips of The Blues Explosion in full flight:

...and here's some Heavy Trash: