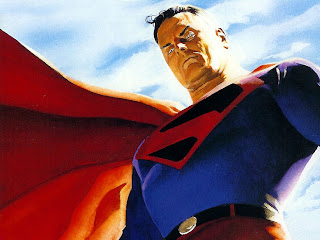 You know how I was saying the other day that Superman was an essentially very dull character because the sheer extent of his powers rendered him invulnerable? Well, I think I spoke too soon.

I've just read "Kingdom Come" by Mark Waid and Alex Ross, and it's knocked my socks off.

This probably won't be news to anyone with even a passing interest in comics, as it was initially published in 1996 and has won multiple awards....but it's brilliant. The most brilliant thing about it is that, at its heart, it has a concept that renders Superman powerless, without actually taking away a single one of his powers and without so much as a sniff of any kryptonite.

How? By taking the central guiding principle of his life - the sanctity of human life - and rendering it utterly redundant in the modern world. Another hero, Magog, outright kills the Joker in cold blood after he conducts a massacre at the Daily Planet that kills ninety-two men and one woman - Lois Lane. Superman immediately takes Magog into custody for his crime, but he is quickly acquitted by a society wondering why it hadn't happened sooner: after all, the Joker was responsible for the deaths of hundreds of innocents over a period of years. Surely the real question to be asked is not why Magog killed him now, but why Superman and Batman and their like did not do the same thing decades ago. At a stroke, Superman is rendered irrelevant by the society he has selflessly protected for the entirety of his adult life. He is powerless in spite of all his powers, and he disappears into a self-imposed exile, to be replaced by a new breed of hero. The story is mostly about Superman's reluctant, well-intentioned but still deeply-flawed second coming, but I won't ruin it by attempting to explain it - do yourself a favour and read it for yourself. 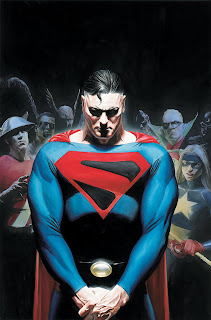 Now, that's a much more interesting premise, isn't it?

The story is absolutely shot through with references to ancient mythology, the Book of Revelations and to armageddon: the end of the world. Does the world need heroes, or have heroes rendered humanity unable to take the responsibility for their own actions?

Cheerful it is not, but then, who says that comic books are just for kids?

I wouldn't want to stretch the point too far, but dare I accuse the authors of this brightly coloured disposable nonsense of ...literature? Perhaps I'm dreaming, but I got the distinct impression when I was reading this that it wasn't really just about people with super powers in tight and often revealing costumes at all, and that in fact - and slap me if I'm going too far here - there might even be some kind of message being conveyed behind the story?