shot me down I cannot fly... 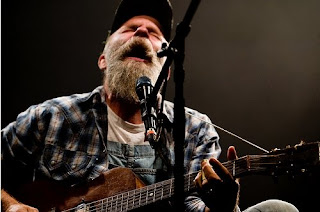 Seasick Steve used to be a hobo. Not a bum, a hobo: an itinerant hopping on and off freight trains looking for work across the USA. Surely if you know one thing about Seasick Steve, this is the thing that you know. It's a compelling back story, for sure, and it's hard not to be entranced by the sheer delight mixed with disbelief that this crusty sixty-something year old displays as he becomes ever more successful. He played the Royal Albert Hall last week, for heaven's sake, and he seems to be a fixture on Later...With Jools Holland, the place he got his first real TV exposure (as recently as 2006). I'm not sure how much of his backstory is mythology, mind, as he has been working in the music business as a performer and a producer since the 1960s, but such is his charm that it's easy to give him the benefit of the doubt.

Rock City is absolutely packed for him tonight. I arrive with Mike a few minutes before he takes to the stage (at around half eight, with the curfew scheduled for 10.... the students are back, and we'd hate to make them wait around for their disco) and we really have to squeeze our way through the hordes to get to a vantage point near the mixing desk. Steve arrives to a rapturous welcome, lumberjack shirt and battered John Deere hat firmly in place. In fact, I've rarely seen an act at Rock City be given so much love before they've even played a note. He's clutching his Three String Trance Wonder, a beaten up guitar with three strings, and he's accompanied by a Garth-from-Wayne's-World-alike drummer, and a young guy on claps and other assorted percussion who he later introduces to us as his son. The three of them launch into Seasick Steve's stock in trade: the blues. It's not fussy, and it's not clever, but there is something primeval about this kind of music - or there should be if it's played right - and the crowd is thrilled. Unlike Heavy Trash the other day, where Jon Spencer is very much lost in his act, Seasick Steve seems to ooze authenticity. He can't write a song about nothing, he tells us, all of this stuff has happened to him. He's brilliant. He's heckled in a good-natured way by the crowd, and his response is to reach down by his side and pick up a baseball bat that he pats into his palm a couple of times before laughing and saying "It's all good. It's all good", putting the bat down and taking slugs from a bottle of Jack Daniels. The crowd laps it up.

.... but after a while, the limitations of the genre - especially when played on a three-stringed guitar or on a Diddly Bow - really start to kick in. I like Seasick Steve, but I struggle to listen to one of his albums in one sitting, and the live show seems to be similar. Before long, the thrill is starting to pall. I hold the crowd at least partly to blame for this, mind: after their huge welcome, it pretty quickly becomes clear that they like the idea of Seasick Steve far more than they like the actuality of Seasick Steve. Before we're even three songs in, the chattering has started, and my attention is starting to wander as I allow it to distract me. There's the guy in the vest standing next to me, recording the whole show on his phone as he stands chatting to his mate. Does he not realise that his chatter is a whole lot closer to the microphone on his phone than Seasick Steve's music is? What's he going to do with a crappy mobile recording of a gig anyway? What about the girls just in front of us? All dolled up for the evening and revelling in the attention they are being paid by the beered up lads standing around them. One of them even answers her phone when it rings. It's all a bit Dom Joly. "Hello! YES, I'M AT A GIG! YES! I KNOW!"

Steve does his best, he realises that sitting down onstage, as he does, is a bit limiting and means that large swathes of the crowd won't be able to see him, so he tries to move around a bit, even if it means moving away from his stomp box, the Mississippi Drum Machine. I think he also senses the attention span of the crowd wandering, and he chops several quiet songs from his setlist so that he can play more stompers. It doesn't stop the chatter though, and although I think he's playing reasonably well, I find myself becoming annoyed by the people around me - never a good sign - and then I start to feel tired, hot and a bit headachey. The music is okay and is played pretty well, but after while I realise that although some of his songs are about hopping on trains to pick 'chokes in Cali, others are about being bitten by annoying bugs in the long grass or about his dead dog... hmm. Perhaps the well of inspiration is only so deep.

In the end, I let the crowd get the better of me and Mike and I retreated to the Rescue Rooms bar before the start of the encore. We arrived just in time to see an unpleasant looking scuffle and a lot of shouting. That pretty much summed up the evening.

I really want to like Seasick Steve, and I really do like some of his music... but it's clear that 90 minutes is about 60 minutes too long for me, and about 85 minutes too long for a large slice of his audience. I don't know what his gig at the Albert Hall was like, but I suspect that I'd enjoy him more in a smaller venue with a more attentive audience, and I fear he may be playing them again soon when the media finally gets bored of him and looks for another novelty to patronise.

Disappointing.... and largely ruined by a terribly disrespectful audience. I hope they enjoyed their disco.