If they want you, then they're gonna have to fight me.... 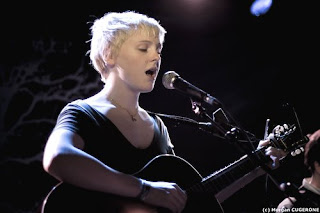 Laura Marling is 18 years old, and if anything she looks even younger. She's been shut out of her own gigs before for looking underage, and even though tonight is for "over 14s", she probably still can't be certain that the bouncers will let her in at all, never mind serve her a drink. She was born in 1990, and far from being a formative musical influence on her life (as they were on mine), the 1980s must feel something of another country as far as she is concerned. As if I wasn't feeling old enough already, the average age of tonight's audience can't be much over 18 either. It's probably not surprising that there are a healthy proportion of girls in the crowd, but I am a touch surprised by how passionately embraced she is by her male fans. I know she's female and they're hormonally driven young men, but they genuinely seem to be interested in the music as much as by anything else. The whoops of approval greeting some of the songs come from one particularly eager fan towards the back, and the guys standing in front of me can't seem to get enough of her, spending much of their time eagerly trying to capture as much crappy video footage of their hero as they can on their mobile phones (isn't YouTube full yet?). It's great that they're so enthusiastic, but I can't help but think that they should be passionate about something a little more manly than this kind of gentle folk. Surely the girls would be more impressed by - say - a hearty passion for heavy metal? It's what I listened to when I was their age, and it never did me any.... ah. I see.

When Marling first appears, she does so without her backing band and performs a couple of very well received solo numbers. She seems shy, though, and cannot wait to usher the rest of the band onto the stage, including a violinist, a double-bassist, and a bearded guy on keyboards. Bearing in mind what I said about Angus and Julia Stone the other day, they all look a bit folk, with their neckachiefs, beards and hats. The glorious exception to this is Marling's marvellous drummer who is clean-shaven, wearing a vest and seems to be a bit of a character: well, he has the name "Dave" attached to his microphone stand, and who doesn't know a good Dave?

Marling has a lovely quiet singing voice that draws the listener in, and her songs are simple and accessible, without seeming to be more than generically derivative (she sounds folk, but not in the awful, smugly cloying way of the Stone siblings, for example). She's got the songs too: "Ghosts", "Old Stone", a rapturously received "Alas I Cannot Swim" and the fantastic "Night Terror", as well as a handful of new songs. Marling apologises for the difficult set list that is "almost new song heavy" and involves a lot of fiddling about with guitars in different tunings, but she really needn't worry: the audience are on her side from the very beginning and all her songs are enthusiastically received. She's nicely self-deprecating, and even apologises for the apparent "self-indulgence" of not leaving the stage before the encore, but instead playing straight on.... well, after all, what's the point of the convention when we all know they're going to come back and when the backstage area is literally about two feet away from the stage? As she rightly ponders, is it more self-indulgent to play through, or to go offstage and wait for the applause?

An excellent performance by a mesmerising singer. The kids clearly love her, and so do I.

(and now I've written this, I feel it's safe to go and see what Mike had to say in his review!)
Posted by swisslet at 08:27