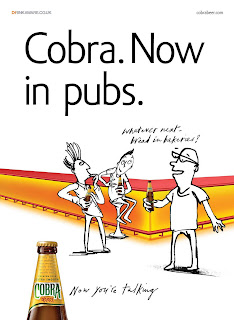 Of an evening, when I've got nothing better to do, I quite often find that the TV works its way towards Dave and I end up watching old episodes of Top Gear, QI, Never Mind The Buzzcocks, Mock the Week and suchlike. They're repeats, of course, but they are generally pretty funny and it's an easy way to pass the time. Easier, certainly, than watching Celebrity Big Brother, anyway.

One thing really gets up my nose though: the primetime coverage on Dave is sponsored by Cobra beer, and we get little adverts at the start and end of every advertising break. There's nothing wrong with that, particularly, and generally I find adverts fairly easy to tune out, but I find these particular adverts absolutely insufferable.

They feature the three characters pictured above, sitting at the bar in a pub chatting over a Cobra, and they have the tagline "Prime time on Dave with Cobra beer -- Now You're Talking". I think the idea, although it's not very clearly articulated, is that Cobra is less gassy than other beers, thus promoting easier conversation in the pub.

The trouble is that not only are these ads not in the slightest bit funny, but they are also irritating, smug and self-satisfied.... which I'm not sure is entirely what Cobra had in mind when they commissioned them.

[waitress breezes past with a tray of food]
"Wow, the food here looks amazing"
"Is this a gastro pub?"
Well, they've got [pause] gastronomical prices"
Smug laughter all round.

[barman is making cocktails in the background]
"I've got a recipe for a cocktail"
"Oh yes?"
"Yes, you take half a pint of Cobra, and you mix it with another half pint of Cobra"
Smug laughter all round.
Prime time with Cobra. Now you're talking.

[man singing tunelessly into a microphone]
"You've got to love karaoke night"
"Someone always murders 'my way'"
"....by doing it their way"
Smug laughter all round.
Prime time with Cobra. Now you're talking.

...you get the general idea.

There are loads of them. None are funny. All are irritating.

What are Cobra going for here? Are they suggesting that people who drink Cobra beer are smug wankers, or are they trying to sell their beer to the smug wankers who they believe watch Dave? Either way, I have to be honest and say that neither scenario makes me want to be the kind of person who buys Cobra. Quite why anyone would want to associate their brand with this rubbish is beyond me.

What do you mean I'm wasting my time being irritated by something as pointless and inconsequential as this?