It doesn't seem quite so remarkable now that everyone wears them, but sometime around the early 1990s, I remember being struck how everybody on 'Neighbours' wore a helmet when they rode their bicycle. Thinking about it now, it was probably something that the producers of the programme made conspicuous entirely on purpose, as Australia was the first country in the world to impose uniform national mandatory bicycle helmet legislation, beginning in 1990. What self-respecting family-orientated cul-de-sac based soap opera wouldn't want to be encouraging its nation's children to ride safely?

Nearly thirty years later and still Britain has no equivalent law, and back then I had probably never seen such a thing being worn by a normal person before (if you can call Toadfish Rebecchi a normal person). Nowadays though, even though we're not obliged to wear them, it is far more likely that you will see a cyclist wearing a helmet than you are to see one without. I think I bought my first helmet because it was a pre-condition for competing in a triathlon I had entered, but I certainly wouldn't get on my bike without it now.

I mention all this because I have just bought myself a ski helmet. I go skiing every year, and it's something that has been nagging at me for a little while. If I won't get on my bike without a helmet, why am I happy to hurl myself down a mountain at speeds in excess of 30mph wearing only a beanie? 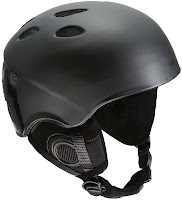 Although a helmet is obviously not a guarantee of safety, the statistics make for interesting reading:

"44% of skiers currently wear a helmet and 42% are intending to wear one the next time they visit the slopes. One reason for this growth is that out of 84,200 winter sports injuries recorded last season, 17,500 were head related. It is believed that out of those 17,500, 7,700 injuries and 11 deaths could have been avoided if they had been wearing a helmet."

To be honest, I value my brain quite a lot. Certainly enough to spend a few quid on a helmet. Did I really want to wait until I had an accident before I took the plunge? Surely every single person who skis has seen the dreadful sight of someone being taken down the mountain headfirst in a stretcher? Forget the stats: intuitively, do you reckon that it's better if you hit your head with or without a helmet? I realise it's better not to hit your head at all, but even the best skiier in the world can't do anything about someone crashing into them from behind, can they? Everyone falls over. Everyone. You might think that snow is a soft landing, but most pistes are packed pretty hard, and there are always things like trees, rocks and barriers that you could run into. Perhaps I'm getting old, but the more I thought about it, the more I thought that I should get myself a helmet.

Of course, given that I have a massive head, my next problem was to find a helmet that fitted me properly. I did a bit of research so that I had a reasonable grasp of what I should be looking for, and on Saturday, having taken the precaution of ringing ahead to make sure they had my likely size, we made the trip over to the Tamworth Snow Dome to have a look in our nearest decent skiing shop. No can do. Didn't fit. So I trooped back to Nottingham and ended up buying the first helmet I'd tried on the week before: The Red Hi-Fi. Obviously, it makes me look silly. And between now and the first day I wear it on the slopes, I'm going to be fretting if it fits me properly. I'm wearing it now to see if can tell.

So far so good.

It's quite warm, worn indoors with the heating on, anyway. No, please don't come round and look through the living room window. I know it looks ridiculous.

Reading this though, I'm fairly sure I've done the right thing. About wearing it on the mountain, that is, not on the sofa.
Posted by swisslet at 21:01