(but baby you'd freeze out there) 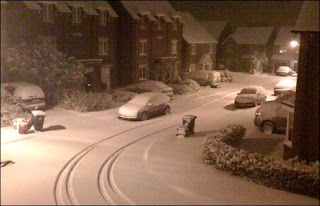 It was the unnatural glow that made me open the bathroom window to have a look outside. I knew what it was even before I opened the window, but I had to see it with my own eyes. Snow. Bollocks. It's great when you're a kid and you might get a day off school mucking about on a sledge, but when you have to slog your way to work, it seems to be not much more than an inconvenience that makes your feet wet, your car journey to work a nightmare and the cancellation of your football game that evening a certainty.

A little later on, as I opened my car door to reach for my scraper to remove some of the snow, a little fluffy bundle fell off the roof and landed squarely on the driver's seat and began to melt. My hands were getting cold and I was not in the best of moods as I contemplated the almost virgin snow still sat on the road.

And then, completely unexpectedly, somewhere along the way to work, I had a total change of heart about the whole thing. Traffic was moving slowly and carefully on roads still slick with snow and ice, and my usual ten minute journey to work was taking far, far longer than usual. I was running late, but for some reason I began to enjoy the weather. After all, surely anything that can enliven an otherwise mundane Thursday in February, the first week back in the office after a lovely holiday, is surely to be embraced?

The roads were busy, but they were also blessedly silent, with the usual noises of traffic hushed by the snow. There was an air of camaraderie amongst the rush-hour drivers too: we were all in this together. The car park at work was oddly quiet too, with people apparently marooned in their lovely houses. You couldn't see the parking spaces either, so people were just doing the best that they could. It was nice.

I left the office fairly early and, in lieu of my cancelled football game, I decided to go for a run. It was dark, and the slightly warmer temperatures meant that the snow was rapidly turning into slush, but I loved every moment of that 4 miles, even though the icy water quickly turned my feet into mobile blocks of ice. As the relentlessly random DJ in charge of my iPod took me from Jeff Buckley to AC/DC and from Scott Walker to Iron Maiden, I admired the slightly sagging snowman in the doorway of a house with his parsnip prick still standing proud; I smiled at the huddled couples walking their frolicking dogs alongside the pond; I weaved my way through the forest of waterfowl footprints in the snow along the Trent Embankment; I ran down the slippery green trails left by the first beginnings of snowmen; I tipped my metaphorical hat at the snowman and the snowdog sat on one of the benches by the river. Above all, I enjoyed the fresh air and the sense of quiet. Thursday evenings around rush hour are not normally this peaceful. 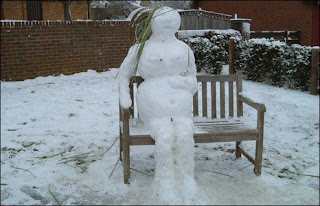 "Whose woods these are I think I know.
His house is in the village though;
He will not see me stopping here
To watch his woods fill up with snow.
My little horse must think it queer
To stop without a farmhouse near
Between the woods and frozen lake
The darkest evening of the year.
He gives his harness bells a shake
To ask if there is some mistake.
The only other sound's the sweep
Of easy wind and downy flake.
The woods are lovely, dark and deep.
But I have promises to keep,
And miles to go before I sleep,
And miles to go before I sleep."

We might get some more snow tonight, although I think it might be too warm now. I actually hope that we do. Perhaps I'm still suffering the aftershock of a happy week spent in the snowy alps, but I could swear that the world seems a slightly nicer place with a blanket of snow.

Email ThisBlogThis!Share to TwitterShare to FacebookShare to Pinterest
Labels: exercise as therapy, the natural world, weather