everything is average nowadays.... 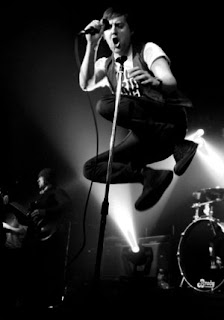 There are two supports at the arena tonight. Esser were fronted by a guy sporting both Vanilla Ice's haircut and a Pearly King's jacket. The music was suitably schizophrenic too, with each song apparently being taken from an entirely different genre, one minute wonky pop, the next sounding like the Hives and then sounding like the Basement Jaxx. Actually, I thought they were pretty good, and at least they made an effort to engage the crowd, with the frontman bouncing around energetically and taking swigs from his hip flask. As the second support, Black Kids were even allowed to have their own light show, and took to a stage resplendent with what looked like giant lightsabres. They're not an obvious arena band, for sure, but they filled the space pretty effectively, and had the crowd well on their side long before they played their two most famous songs, "Hurricane Jane" and "I'm Not Going to Teach Your Boyfriend How to Dance With You". Reggie Youngblood in particular surprised me by quite how good a guitarist he was, and Dawn Watley was beguilingly barefooted behind her keyboard.

....And so to the main event. I suppose it's only fair at this point that I disclose that I don't actually like the Kaiser Chiefs very much. I bought "Employment" on the strength of the first four singles, and then discovered that it pretty much consists entirely of the first few singles. If that in itself wasn't enough to turn me off them, they then had the bad grace to release "Ruby" as the lead single from their next album. Surely that's got to be a contender for the crown of the most irritating song ever committed to record? The band do have a formidable live reputation though, and although I've always been busy watching someone (anyone) else when they've played at Glastonbury, I was curious to see for myself if they could cut the mustard, and the "plus one" ticket from Mike certainly gave me the opportunity without needing to set myself back the best part of £30.

They got off to a bad start. The conceit of having a couple of your stage crew dressed in long white coats and clutching clipboards is presumably meant to keep the crowd entertained in the minutes before the band take to the stage, but it only served to irritate me as they made a great show of strutting around the stage checking setlists and so on. My mood improved somewhat when the band made an entrance worthy of Spinal Tap themselves: the lights dimmed and dry ice began to flow out across the stage and into the arena. The crowd roared in anticipation and the band took to the stage.... but the dry ice kept coming. When the main lights came up and the band kicked into their first song, you actually could not see them at all through the fog. Sadly you could still hear them as they plodded their way through a song I've never heard before from their new record, but at least they'd genuinely given me something to laugh about. After this shakey start though, the band launched straight into "Every Day I Love You Less and Less" and then "Everything is Average Nowadays". In some ways it was quite a bold move to play the two together, as effectively they are the same song, but in practice they are both so up-tempo and performed with such gusto by the band, that they are impossible to resist. I'm sceptical about them to say the least, but watching the crowd bouncing up and down and Ricky Wilson jumping off every available monitor, and I soon found myself beginning to thaw. Perhaps they weren't so bad after all?

Sadly, that was as good as it got. There are other hits, of course: "I Predict A Riot", "Never Miss a Beat", "Oh My God", "Ruby", "Angry Mob", "Love's Not a Competition (But I'm Winning)"... but tellingly, it's those first 4 songs that caught my ear initially that are the ones that stand out, and it's been diminishing returns ever since, with last single "Good Days, Bad Days" being a case in point: it doesn't have much of a hook and it doesn't really go anywhere. Ricky Wilson can jump around all he likes and exhort the crowd to wave their arms in the air all he wants, but nothing can conceal their lack of substance. At one point, Wilson decamps to a tiny little stage in the middle of the arena underneath a single spotlight. He makes a great show of sprinting through the crowd to get there, and then when he's there, he can only play an album track and shout "We are the Kaiser Chiefs!!" a few times before sprinting back to the main stage. It's all he's got, and frankly it's not good enough.

The band sound alright, I suppose, although drummer Nick Hodgson is clearly a frustrated frontman (although, by the sounds of it, he wouldn't be half as good as Wilson) and guitarist Andrew White spends practically the entire set with his back to the audience and facing the drum riser. Wilson aside, they're a pretty anonymous bunch of Sleeper-blokes, truth be told. Wilson himself is all action: throwing his mic stand around, swinging the microphone about, bouncing his tambourine and drumsticks up off the stage floor, climbing around on the lighting rigging, hanging out into the crowd and soaking up their adulation... but he's all gesture. Like his band, they know how to work a crowd, and it feels to me as though they simply go through the motions. For all that they present themselves as the people's band, I actually find them to be a bit sneering. Wilson is at pains to point out that the angry mob of the song are not his audience, but who else is he talking about? Why else do the crowd belt the chorus back at him with so much gusto:

That's clearly meant to be commentary on the great unwashed, tabloid reading British public, but who does he think he's pitching his anthems at?

"I Predict A Riot" is practically irresistable as a song, but again the attitude is one of sneering condescension. The chip fat coated masses he sings about are the same people who sing the words back at him with uncritical adoration. The only thing worse than actually being clever is pretending that you're clever, and the Kaiser Chiefs certainly think they are smarter than their audience...although, to be fair, the audience have made the band very rich indeed by lapping up their anthemic but empty and soulless music. I was expecting the crowd to be made up of Oasis-like beer chuckers, but perhaps those apes know when they are being patronised and have largely stayed away, preferring more "authentic" bands like Kasabian, The Twang and Oasis themselves. There are one or two bare chested morons waving their football shirts over their heads, but the bulk of the crowd mainly consists of "nice" couples who are here to have a good singalong and who probably also enjoy the Pigeon Detectives, Scouting for Girls and other landfill indie. I'm generalising, I know, but watching a packed arena singing along to this empty, echoing nonsense is a very depressing experience.

The Kaiser Chiefs do have some good songs, but they're vapid and vacuous, and by the end of their 90 minute set, I am delighted to see the back of them.

Mike's review of this gig can be found here.
Posted by swisslet at 22:52