what don't kill you make you more strong..... 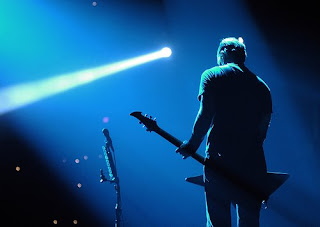 I still think that one of the best gigs I have ever been to was Metallica at the Milton Keynes Bowl in 1991. I'd discovered the band a few years before, at some point in 1988, when something had inspired me to -- without having heard the band -- to purchase a cassette copy of "...And Justice For All". I was already into bands like Iron Maiden, but I think it's fair to say that I hadn't heard anything like Metallica before. With that album, and completely unknown to the 14 year old me, the band had taken a significant stride away from their thrash past and were instead creating complex songs, many over ten minutes long, with lot of changes of pace and complex, dive-bombing guitar solos. Although I basked in the baffled looks I got from people who heard me playing the album, it took me quite a long time before I could really appreciate what I had discovered. In fact, it probably wasn't until after the release of "Enter Sandman" and the Black Album some years later.

Over the ensuing twenty years, I have slowly worked my way backwards through the band's back catalogue and -- thanks to Mark -- have also caught up on a lot of their more recent stuff too. Admirable though "Some Kind of Monster" might be for its honesty, there's surely no denying that the band's output of late has been somewhat patchy. Perhaps, we wondered, this was band whose time had gone (and don't even mention Napster). I'm not sure many people think that any more: the band's last album, "Death Magnetic" is immense, combining the complex arrangements of pomp era Metallica with the thrash of the early days. It's a fantastic record. The MP3s are even LOUDER than everything else I have on my iPod, scaring the bejesus out of me every time they pop up on shuffle. Oh yes, I was looking forward to this one. 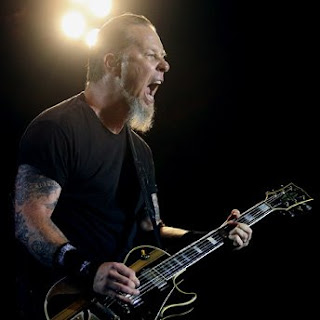 Although I'm not a big fan of Arena gigs, I welcomed the arrival of an arena in Nottingham as it meant that we now had a good range of music venues of all sizes. Rock City is a brilliant place to watch live music, but its capacity is only a little over 2000 people, and the addition of an arena with five times that capacity meant that I was likely to get a chance to see bigger bands without needing to travel to the NEC. Whilst this has certainly been true, just take a look at the list of bands I have seen there over the last couple of years: The Darkness, Travis, Franz Ferdinand, Keane, Kaiser Chiefs, The Arcade Fire, Morrissey, Razorlight, James Blunt, Kings of Leon, Coldplay..... Yes, you could argue that they are all too big to comfortably play in Rock City, but are they really what you would call arena bands? Are any of them really big enough to fill the acoustics of the place? Mmmm. I'm not sure. The experience is generally an unsatisfactory one: you're too far away from the band for it to be a truly intimate experience, but the sound quality is usually often shockingly poor. It's better to see a band at the arena than not to see them at all, but it's often far from ideal.

I think I've just been to the gig that arenas were built for: Metallica. Let's put this into some context: Over the course of their 28 year career, Metallica have sold 100 million records worldwide. They are widely thought of as being the most influential hard rock / metal band of all time. They are a big, landmark act, famous across the world and responsible for indelibly shaping their genre . The Kaiser Chiefs they most assuredly are not. Although they have never played Nottingham before, Metallica have been playing arenas for decades, and that experience shows. This band fill the space like no other I have seen. Most acts approach an arena show by sizing up the stage at one end and wondering whether to bother having a runway or a secondary stage or something like that. The Kaiser Chiefs on Sunday had a tiny stage just big enough for Ricky Wilson to stand on up near the mixing desk, and he stood on it for one song. Coldplay at the NEC made a bit more of an effort by both having secondary stages at the end of runways out into the audience, and then by actually appearing amongst the crowd to do a little acoustic set. Both were still mainly bound by the main stage. Metallica throw this convention in the bin: the main stage is not used at all, and the band instead set up a large, rectangular stage in the middle of the arena floor and play in the round. The drumkit is placed in the centre and is slowly rotated around through the show, and there are eight microphones dotted around the edge of the stage and facing out into the crowd. The result is that everyone feels closer to the band, and the musicians themselves are able to move around dynamically engaging with different sections of the crowd. It works fantastically well, and makes every seat in the house a good seat.

At first glance, I write off tonight's crowd as being your sterotypical hairy, middle-aged, black t-shirted heavy metal crowd, and Sarah and I ponder whether there is an average of more than one tattoo for every person present. On closer inspection, however, there is a far wider demographic present. Sure, you don't get as many young trendies as you often see out at a gig here, and designer clothing is very much in the minority, but there are a surprising number of girls here, and not all of them are dressed up in standard rock chick uniform (as Sarah said, think "slutty goth"). There are a lot of thirty and forty-somethings here, but also a large number of kids too... not just people in their 20s, but actual kids. Metallica's demographic is apparently a reasonably large one. Lots of people look like they've been to metal gigs before, and have the t-shirts to prove it, but lots look as though this may be their first time. We wait for the support band to finish (Machine Head, who had been preceded by Sword...) and then head into the arena itself to find our seats.

The band come on at 9pm on the button, and the otherwise completely blacked-out stage is lit by an impressive set of lasers as the band launch into "That Was Just Your Life" and James Hetfield, underlit by floor spots, works his way around the microphones on the stage, with his colleagues remaining in darkness. It's the opening song from the new album, and it's a cracker. The rest of the stagelights come up at the conclusion of the song, and we're off to a flyer. The set itself is a good mixture of very old and very new. New songs like "The Day That Never Comes", "All Nightmare Long" and "Broken, Beat and Scarred" blend together really nicely with timeless classics like "Master of Puppets", "One", "Sad But True", "Nothing Else Matters", "Fight Fire With Fire" and, of course, "Enter Sandman". I'm already admiring the stage set up and lights when the entire lighting rig seems to break into four pieces and four coffins descend and pivot towards the crowd. It really doesn't get any better than this, and the crowd goes wild - and they haven't even started using the flamethrowers yet. The mosh pits look furious on first glance, with people running headlong into each other and aggressive looking bare-chested men rutting like stags. On closer inspection though, it's actually far more ordered, and there appear to be unspoken rules: anyone knocked over is carefully picked up before being shoved again, and, for the faster numbers, everyone moves around in a circle, like a very high-octane game of ring-a-ring-a-roses. It's fascinating stuff. The band themselves are great, with Kirk Hammett and Rob Trujillo working their way around the stage as Hetfield barks out his lyrics, and Lars Ulrich is a whirling dirvish, standing up from behind his drumkit as often as he can, and running to the edge of the stage to spout water onto his adoring fans. It's really impressive stuff. I have never seen a better arena act play this venue, and it's a damn good show.

In the end, the band play for something like two and a quarter hours, finishing with the enormous crowd singalong of "Seek and Destroy" as inflatable black Metallica balls rain from the ceiling.

Even when the band have finished, and the curfew is long past, the band seem reluctant to leave the stage. It won't be 28 years before they next play Nottingham, they promise, and the barely thinning crowd roars its approval.

Metallica are an absolutely brilliant, brilliant band, and after a bumpy few years, they appear to be back doing what they do better than anybody else. Arena gig? They slayed it. Best arena gig ever. An object lesson in how to play this sort of venue... are you watching Razorlight?