and the street is singing with my feet.... 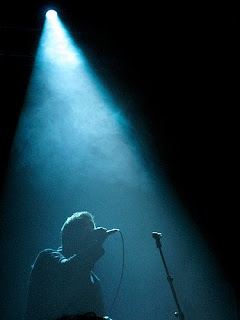 The last time I watched a band four times within a twelve month period was in 2004 when I seemed to bump into Snow Patrol quite a lot and they must have been considering a restraining order. Initially, supporting Athlete, they were new and exciting and at the point in their career where "Run" was yet to chart. The next couple of times I saw them were fantastic, surfing along with a band riding the crest of the wave. By the time I saw them at the dog-end of the year at the Birmingham Academy though, the set was starting to drag and was in desperate need of some fresh material.

"The Seldom Seen Kid" was released in the UK on 17th March 2008 to no great fanfare. It was well reviewed, but when I saw the band at Rock City on 14th April, the venue was not even sold out.

They were fantastic, of course, with the new material sounding even better live. Rock City only fits about 1,900 people, and although it's a great place to watch bands, I couldn't help wonder how a band this good hadn't managed a sell out. As I said at the time:

"In a world in which bands like Razorlight, Kasabian and Babyshambles can play arenas and stadiums -- and good luck to them -- there's simply no justice in the world that a band as good as Elbow are still playing venues like Rock City. Selfishly though, as a fan, that works out just fine for me. World domination would be great, but seeing a band this good in a venue as small as this is good for me too."

On the evening of Tuesday 9th September 2008, everything changed for Elbow when, to almost universal acclaim, they won the Mercury Music Prize for the album of the year. Momentum had been building slowly, with "One Day Like This" in particular receiving lots of exposure as the soundtrack to events like the Olympics. Their sundown performance at Glastonbury on the Other Stage was watched by millions of people from their homes as well as by a huge crowd on Worthy Farm basking in the glorious light of a splendid sunset. The prize suddenly thrust Elbow into the big leagues, and far from being unable to sell out Rock City, now they were booking dates for Wembley Arena (which they play on 14th March).

I saw the band again on October 17th at Leicester De Montfort, but the gig had sold out long before the Mercury prize was awarded, so the crowd had long since been converted to the slow-burning pleasures of the band, and so the atmosphere was one of joyous, but also slightly reverent celebration. I couldn't help but wonder how a crowd attracted by the success of their most recent album was going to react when presented with the older songs like "Scattered Black and Whites". Would they listen in such an attentive and respectful silence and resist the opportunity for a trip to the bar and a chat before pushing back into the crowd when the band launch into "Mirrorball" or "Grounds for Divorce"?

If Elbow's crowd is changing, then this gig at the Academy in Sheffield was going to be my big opportunity to find out. I was also quickly going to find out if, great album though it is, the band had been flogging it around for too long and if it was time to go away and write some new material.

The venue itself is pretty nice. With a capacity of 2,350, it's like a slightly bigger Rock City. Although the auditorium has big overhangs from the upstairs balcony, from what I could tell, you get pretty good views of the stage from almost wherever you are standing (albeit I am taller than most people, and so can see from almost anywhere at most venues). The crowd, at first glance, appeared to be little different to what I had seen before at Elbow gigs past: an older indie crowd. As it turned out though, they were in fact a little less attentive and a little more prone to chatting during songs than the crowd at De Montfort, but they weren't too irritating. More serious was that the sound wasn't quite so good. Alright, De Montfort has excellent acoustics, but here the sound was distinctly boomy. It improved as the set went on, but it was a bit muffled all the way through. Not to worry though: the band were superb.

The set list was much the same as before, with a lot of the (now-not-so) new songs, a handful from "Leaders of the Free World" (Station Approach, Leaders of the Free World, Mexican Standoff, The Stops...), nothing at all from "Cast of Thousands" and a scattering from "Asleep in the Back" (including Newborn and Scattered Black and Whites). A couple of songs were different, but this was more or less the same set in the same order as we saw in Leicester in October. I think it says a lot for the quality of the material, the excellence of the playing and the geniality and inclusiveness of Guy Garvey that they manage to pull this off without me feeling in the least bit bored or jaded at all. Of course, this being a gig in Sheffield and to add a bit of variety, we had the added pleasure of local legend Richard Hawley joining the band onstage for "The Fix", his mellifluous croon blending beautifully with Garvey's rather more careworn, but still spendid, lisp.

Elbow are a marvelously textured band; they write songs that take a while to soak in, but once they have soaked in, they seem to mature and deepen like a fine cellared wine, getting richer and broader with every listen. It took me a comparative age before I really clicked with "Leaders of the Free World", with Puncture Repair proving to be the key, but it has now become one of my very favourite albums, and is still my favourite Elbow album. "The Seldom Seen Kid" has been very similar: I initially didn't know quite what to make of it, but seeing it live helped me "get" the songs, and it has now become an almost immovable fixture on my internal jukebox. "One Day Like This" is perhaps the exception that proves this rule - it's instantly recognisable (to me, at least) as being by Elbow, and it contains some typically lovely turns of phrase, but it is immediate and anthemic and has opened the band up to a whole new audience. It goes down marvellously here too, of course, with the band supported by their now regular string quartet, and with the now-traditional sprinkling of the crowd with silver streamers from a cannon Garvey releases during the song. It's a great moment in the set again, for sure, but it's still not my favourite Elbow song, and the singalong - although great - is not as good as that first time I saw them doing the song at Rock City, when the crowd continued to sing the refrain for five minutes after the band had left the stage to encourage them back for the encore. Garvey announces my favourite song of theirs as being sadly dated now that Bush is out of office, but the drive of "Leaders of the Free World" and its booming bassline that get me going every time, although I also still get a massive kick out of the primal riff of "Grounds for Divorce" and well-up every time I hear "The Stops" (although tonight this is delivered faster and with less emotional impact than in October. It remains a real heartbreaker of a song though).

In a brief, impromptu Q&A session during the encore, Garvey tells a disappointed crowd that they won't be playing Glastonbury this year (because they intend to be enjoying it as punters). I'd happily watch them play there again, of course, but I also can't help but think that the break is a really good thing. They've been flogging this album for a while now, and triumphant though the last twelve months have been for them, it's time to move on. If they go away now and produce some more quality material that continues their upward trajectory, then we could well be looking at the Glastonbury headliners for 2010.

I certainly hope so.

Good band. Even though it was a long drive home in the dark and it was pissing with rain all the way, I had a smile on my face all the way back to Nottingham. Elbow are a band I will happily travel to go and see.