you're a big boy now, so let's not talk about growth... 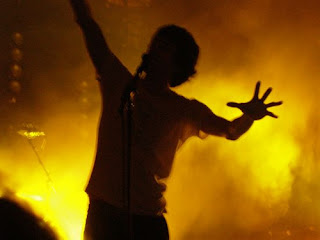 I think I've said before how quite how much the mood and demeanour of a band can affect your enjoyment of a gig: if they're smiling, interacting with the crowd and generally looking as though they're enjoying themselves, then I find that their enjoyment is somehow broadcast out to the crowd. The reverse is also true, and if a band is clearly going through the motions, then I find that this can transfer across into the audience too, and you really have to be up for a gig to really enjoy it when the band themselves clearly are not. I suppose it's a statement of the obvious to say that the reverse is also true, and that the mood of an audience can sometimes lift a band up to even greater heights. Most people really seemed to enjoy Snow Patrol in the Arena last night: it was a big crowd and, like many arena crowds, they looked like the sort of people -- with the best will in the world -- who don't go out to a great deal of gigs and were absolutely determined to make the best of it. Snow Patrol being the band that they are, there were also lots and lots of couples in the audience too. They had a blast, and Gary Lightbody and the band really seemed to feed off their enthusiasm. They're not a cool band, and I was not very surprised to find out when I got to work this morning that the gig had also been attended by my boss, one of our programme managers and by my director. Nothing wrong with that, of course, but it was that kind of a gig.

As I frequently say here, I'm not a massive fan of arena gigs. The size of the venue generally precludes intimacy, the sound is often poor and the crowds are inevitably different to those found in smaller venues. The Metallica gig the other day served to remind me of how good gigs like these can be, though, and I've given Snow Patrol a 10/10 gig review in the past (the only one I've ever awarded, actually), so I should really have been hoping for the best from the evening.

Unfortunately, I was in a filthy mood. I've had a bit of a week, both at work and beyond, which had culminated in me receiving a miscued shot full in the face at football about an hour before the gig. A sore nose, a headache and a full imprint of my teeth on the inside of my cheek was never really going to help put me in the right frame of mind for the show. Sure enough, shortly before the band came on, there was a little display on the backdrop showing the other cities on this tour, appearing one-by-one, with the little slogan "All these places feel like home" on the bottom. It's one of Snow Patrol's song lyrics, of course. The screen then faded, to be replaced with a message saying that tonight was Nottingham..... the crowd went wild, but I thought it was awfully cheesy and made a mental note to deduct a mark before the band had even taken to the stage. Yup, I was in a bad mood.

Snow Patrol came on and began to play. The set was a mix of material from their new album, "A Hundred Million Suns", and from their last two albums, "Final Straw" and "Eyes Open". As usual, they didn't play anything from their first two albums, but because most of that stuff isn't anywhere near as good, that was no surprise either. They sounded okay and seemed perky enough, with Lightbody in particular bouncing around with his usual wide-eyed enthusiasm.... but they just weren't doing it for me. Something seemed to be missing. They've been playing arenas for a while now, so it would be wrong to say that they're not by nature an arena band, but for me they seemed to be going through the motions. As a band, I think they've really got some fantastic songs. "Run" was the start of something really special for this band, and -- along with "Chasing Cars" -- is probably the song that sums them up best: they're all about heart-on-sleeve declarations of love and bruised, heartfelt declarations. Lightbody is not as articulate a song-writer as Elbow's Guy Garvey, but he's very much from the same school of thought and, like Garvey, seems the kind of man who works best when he is in love. "Final Straw" was their breakthough, and although "Eyes Open" seems, on the face of it, to be more of the same, actually it's an even better album, with stronger, deeper songs. The new album, sadly, is different. The band are still operating in the same emotional landscape, but they don't have the same strength of material to fall back on. "Crack the Shutters" has been somewhat optimistically tagged as the new "Chasing Cars", but really it's nothing of the sort. Far better are songs like "If There's A Rocket Tie Me To It" or "Take Back the City", where the band take a step away from the ballads and flex their musical muscles a little bit. But the ballads are Snow Patrol's trademark and their livelihood: they need songs that can be used on "Grey's Anatomy" and that's what Lightbody has gone for. For me it doesn't work, and neither does the live show.

Good songs are needlessly thrown away: "Run" is done as a solo acoustic number early in the set, although perhaps he's sick of hearing the Leona Lewis version and is keen to move on. "Chasing Cars" is played almost at a whisper for several minutes mid-set, presumably to allow the crowd to take up the slack, before the band come back full blast for the last chorus. It doesn't work, and two of the band's trump cards are tossed aside. I don't know how long the band have been on tour, but Lightbody is fluffing lyrics all night (and gleefully admitting as much to the crowd), there's also quite a lot of giggling. I'm sure they're not meaning to laugh at us, but we've paid more than £30 to be here tonight, and I think we have a right to expect a band to be a little more professional. The encore, when it comes, is terribly misjudged, with about 20 minutes dedicated to "The Lightning Strike", the final song on the new album, and three separate pieces of music glued together. It drags, and no amount of fancy animation on the screen can take away from that fact. They finish with "Open Your Eyes", but it's a terrible anti-climax, and for perhaps the first time ever, I sit in the interminable queue of idiots in the car park wondering why the hell I stayed to the end.

They're a good band. I know they're a good band. I don't care that they're not cool - I think they've got some brilliant songs and I think that Lightbody is a very endearing front man. I just think that they've got it wrong and we should be expecting more from them than this. The majority of the crowd lapped it up, of course, and my colleagues seemed surprised when I expressed my disappointment. Perhaps I'm being too critical, but because I was expecting more tonight, I think I actually enjoyed this gig less than the Kaiser Chiefs a few weeks ago. I listened to the new album again this morning, and actually found that it has grown on me a bit, so perhaps I have allowed my mood to sway my judgment too much.

As a band, they've probably never been as successful, but I think they have a lot to prove with their next record. They waited a long time for success, and I have nothing against their formula, as long as the songs are good enough. Tonight I thought they were very, very disappointing.

But then, I was in a bad mood.

** no earworms this week, I'm afraid, unless I suddenly experience an unexpected energy surge later this evening.... but Ben should be here as Guest Editor next week. Have a good weekend, y'all.
Posted by swisslet at 18:58