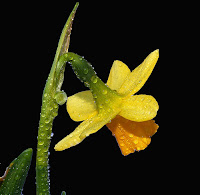 When we were in Ecuador in the spring of 2007, our guide had a wise saying: "not for free is the rainforest". He would say this, with a phlegmatic shrug of his shoulders, whenever anyone looked anxiously at the sky. He had a point. Why worry about whether it's going to rain or not? After all, it was the rain that made the beautiful landscape of this stunning country possible.

The phrase sprang unexpectedly to mind as I was stood over a barbecue in the rain on Sunday. Instead of spending the day arguing with my dad over the existence or otherwise of the historical figure of Jesus Christ, I had elected to spend the weekend with my friends in Oxford watching the final two rounds of the US Masters golf at Augusta. I'm sure I've spent Easter away from my parents before, but there was something wonderfully liberating this year about electing to spend the time with friends instead of family. We drank beer, we drank wine, we shot the breeze about the golf, fell asleep in front of old re-runs of Red Dwarf and we generally relaxed in the company of people we've actively chosen to spend our time with over the course of the last 25 years. Are friends the new family? Is black the new black? I can never keep up with these things.

Given that it was April and we're in England, perhaps it was a little ambitious to plan to have a a barbecue on Sunday... and sure enough, no sooner had we put all of the bits and bobs out on the garden table and fired up the charcoal, than it started to rain.

I didn't mind it though. Ten days in Canada, beautiful country though it is, has given me a new appreciation of the English spring. The Rockies are stunning, no question, but where the winter snow is starting to melt, the grass underneath is like dirty brown straw. It's not surprising, really, given that it's been under a coat of snow for several months and hasn't seen a jot of sunlight in all that time, but it's still not very attractive. England at this time of year, on the other hand, is absolutely bursting with promise. Compared to Canada, of course, the temperature is extremely mild, but how pleasing is it to see the trees blossoming, the daffodils blooming, to smell the first grass cuttings of the season and to smell the changing season in the air? Of course, as Ivan from Ecuador would point out, this stuff doesn't come for free..... but if the price we have to pay for the English spring is a little rain, then I say bring it on.*

I've had a lot on my mind recently, but it was a great weekend.

* if it's still raining in May, however, with no sign of abatement and Glastonbury beginning to figure in my thoughts, then I reserve the right to change my mind.
Posted by swisslet at 20:29