underneath the mango tree.... 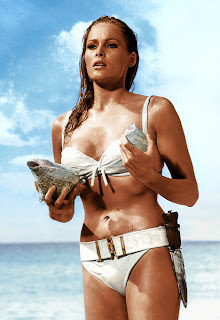 Over the last few months, I've been slowly working my way through Ian Fleming's James Bond books in chronological order. After finishing Ian Rankin's "Mortal Causes" in Canada, I started to read the sixth book in the series and the first one to be turned into a film: "Dr No".

Of course, everyone knows that the Bond of the books is a very different creature to the one portrayed by any of Connery, Moore, Lazenby, Dalton, Brosnan or Craig, but even though they are nearly all over fifty years old now, they remain superbly taut and effective thrillers. They are, however, very much a product of their time, and -- to the eyes of this reader, at least -- some of Fleming's language is positively eye-watering. Following hard on the heels of his bizarre assertion (in "Live and Let Die") that black people cannot whistle, consider this passage from "Dr. No", where Bond is having lunch with the Colonial Secretary in an exclusive club in Jamaica:

"It's like this." He began his antics with the pipe. "The Jamaican is a kindly lazy man with the virtues and vices of a child. He lives on a very rich island but he doesn't get rich from it. He doesn't know how to and he's too lazy. The British come and go and take the easy pickings, but for about two hundred years no Englishman has made a fortune out here. He doesn't stay long enough. He takes a fat cut and leaves. It's the Portuguese Jews who make the most. They came here with the British and they've stayed. But they're snobs and they spend too much of their fortunes on building fine houses and giving dances. They're the names that fill the social column in the Gleaner when the tourists have gone. They're in rum and tobacco and they represent the big British firms over here - motor cars, insurance and so forth. Then come the Syrians, very rich too, but not such good businessmen. They have most of the stores and some of the best hotels. They're not a very good risk. Get overstocked and have the occasional fire to get liquid again. Then there are the Indians with their usual flashy trade in soft goods and the like. They're not much of a lot. Finally there are the Chinese, solid, compact, discreet - the most powerful clique in Jamaica. They've got the bakeries and the laundries and the best food stores. They keep to themselves and keep their strain pure." Pleydell-Smith laughed. "Not that they don't take the black girls when they want them. You can see the result all over Kingston - Chigroes - Chinese Negroes or Negresses. The Chigroes are a tough, forgotten race. They look down on the Negroes and the Chinese look down on them. One day they may become a nuisance. They've got some of the intelligence of the Chinese and most of the vices of the black man. The police have a lot of trouble with them."

See what I mean? How many casually racist statements about how many different races can you make in one paragraph? Chigroe? Really?

But, eye-watering though it may be, does it follow that language like this should undermine the value of the book? No, it dates it, certainly, and is probably offensive to most modern readers, but a reader should nonetheless resist the temptation to assume that the words and opinions of Pleydell-Smith, the Colonial Secretary, are one and the same with the opinions of Ian Fleming, the author (Bond himself, for example, appears to be somewhat less flamboyantly bigoted). They may well have been Fleming's views, but we don't know that for certain. The historian in me also cautions against applying the (more politically correct) values of our own age to a book written in 1957. I'm sure that in 52 years time, people will find our attitudes and beliefs somewhat alien too.