When I was studying history at University, I used to find gender studies exasperating. It wasn't that I didn't find the subject interesting - I did a whole course on women in Industrial Revolution Britain as revealed in the works of the likes of George Eliot, Jane Austen, Elizabeth Gaskell and Mary Wollstonecraft - I objected more to the posturing of some of the historians who covered the subject. Was it really necessary to make a point of calling history "herstory"? What place did political correctness have here?

Of course, the point that historians like this were making (and sometimes labouring) was simply that a good historian should take care to consider the subjectivity of every single piece of evidence they study... including any gender slant. It is a truism that history is written by the victors, but it is equally true that history has largely been written by men, and the role of women is, by comparison, neglected. The language that we use IS important because it can either help to reinforce or to undermine the status quo - and not just in history either.

I mention this because I have decided that I need to cut some words out of my common vocabulary. They are words that I use pretty often, but only rarely in their original sense, choosing instead to use them almost exclusively when swearing. The words in question? heaven; hell; God; Jesus Christ; damn; holy. Stuff like that.

Why am I going to cut them out? Because I do not believe in God. It's not just Jehovah, mind you, I don't believe in any gods - not Zeus, not Baal, not Shiva. None of them. I simply choose to go one god further in my disbelief than most. I don't believe in heaven, I don't believe in hell. I believe that when you die, that's it - and I also believe that that's okay. Like lots of people, I have certain views on organised religion, and my study of history has shown me some of the more unpleasant things that people have done in the name of religion, but I absolutely respect an individual's right to their own religious beliefs. Of course I do....it's just not for me. I was brought up in the Church of England tradition: I sang in the choir; I attended Sunday School; I studied Religious Education at school; I read the lesson in chapel; I know large chunks of the Bible story from both Old and New Testaments.... the works. That kind of stuff is hard to entirely shake off, and I'm sure that my christian upbringing (both of my parents are believers) is stamped through my core, whether or not I happen to believe in the Almighty.

So why worry about the words? What difference do they make to anything? They're just words, aren't they?

I received a text message from a colleague the other day. It was one of those messages that has clearly been sent to everyone in the addressbook in his phone, and it was announcing the birth of his son, Joshua. As well as telling us all the exact minute of his second child's birth and telling us the exact weight -- why do people do that, by the way? -- he also took the time to thank everyone for their thoughts and prayers. Now, I know that this is simply the kind of thing that people say in circumstances like this, but those words made me oddly angry. How dare he presume on either count? Yes, I'm pleased that everthing has gone okay for them, but I can assure him that it's got nothing to do with any prayers of mine, and I seriously doubt it has anything to do with anybody's prayers at all. Why use that word? Why presume that just because he's a religious man, that everyone else shares his beliefs? There's another reason to be angry too: another of our colleagues has been having a difficult time recently because his wife went into labour with their twins prematurely, and one of the babies died and the other is clinging onto life in intensive care. Whether consciously or unconsciously, the idea that the wellbeing of Joshua has anything to do with prayers means by implication that if things go wrong then that's somehow down to a lack of prayer. Yes, I know that the text message wasn't meant to mean anything within a million miles of that, but I'm afraid that's the unconscious insinuation that I read into those words. What does the church teach us? If you're good and you say your prayers, then good things will happen to you. If you don't.......

The words you choose are important, and I'm going to try to rid myself of those words that have a religious overtone that I don't believe in.

Not entirely uncoincidentally, I put a new sticker on my car this weekend. 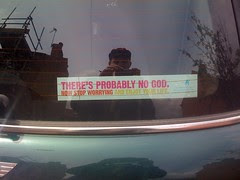 Some people think that atheists must lead empty, purposeless and meaningless lives in the absence of a belief in the afterlife. I've actually found my lack of belief to be quite liberating. If this is all there is, then what greater motivation do you need to try and make the most of it; to celebrate being human and to celebrate our humanity?

I don't believe in God, I believe in mankind people.
Posted by swisslet at 20:35