king for a thursday afternoon.... 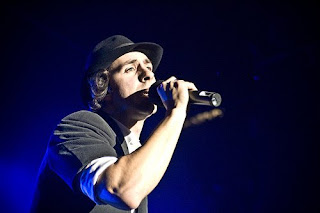 I feel a strange kind of kinship with Maximo Park. This feeling has absolutely nothing to do with their music, although their spiky, wordy indie is right up my musical street, and has everything to do with the fact that I feel that we are connected. This is no abstract connection: this is a very real connection. Ready? Guitarist Duncan Lloyd is from Derby and was best man at a colleague of mine's brother's wedding. Yeah. We're pretty much family. This colleague actually recommended that I go and see the band as soon as she heard I was going to the Glastonbury Festival in 2005. I hadn't heard of the band, but I took her recommendation seriously enough that I felt mildly guilty that the floods meant that the trip down to the John Peel stage would have been unfeasibly difficult and I didn't bother. I bought the band's debut album immediately upon my return and then kicked myself that I hadn't seen them when I had the chance. In the end, I had to wait until April 2007 before I saw them perform live. They were pretty good, but not fantastic, although "Our Earthly Pleasures" went on to be my favourite album of that year.

The band released their third album, "Quicken the Heart", a couple of weeks ago but, to be honest, I found it to be distinctly underwhelming. Perhaps it was time for the band to try to move their sound on, but the first couple of listens revealed a slightly murky sounding effort with the guitars well down the mix and the keyboards well up. Never mind. I wasn't giving up on them easily, and I was really hoping that the songs would somehow spring into life and make perfect sense once I heard them live.

For once, I actually turned up at the venue early.... not as early as the long line of kids I'd seen when I walked past on the way to grab some dinner, queuing up outside Rock City waiting for doors, but early for me and in plenty of time to watch the support. I'd heard good things about Bombay Bicycle Club and decided to give them a whirl. Well, what can I say? They're obscenely young, they sound a little bit like generic early 90s indie in general and like Hefner in particular, and their guitarist looks like Ron Weasley. Well, one of the Weasley clan, anyway. They were okay, I suppose, but I didn't hear anything special.

The old lags started to fill the place up before the main act took to the stage, but the crowd was still a pretty healthy mix of young and old, girls and boys. I was actually really looking forward to this one.

This was a real curate's egg of a gig. The first half of the set was loaded with some absolute classics: the band burst onto stage to "Graffiti" and then proceeded to mix up songs from their first two albums with tracks from the new album. It worked pretty well, and songs like "Wraithlike" and "Cloud of Mystery" sounded far better live than they do on record, with much more guitar, and with the increasingly suspiciously be-hatted Paul Smith throwing himself around the stage like a lunatic, gurning at the crowd. He's something of a strange frontman, I think: he writes some often quite thoughtful lyrics, but he's also something of a dynamo onstage. I'm sure he's not everyone's cup of tea, and perhaps some of his posturing can be a bit tiresome, but whilst the rest of the band are pretty static, he adds a lot of energy to the proceedings, and his enthusiasm tends to transmit out into the crowd. They have some brilliant songs too: "Books From Boxes", "Our Velocity", "Going Missing", "The Night I Lost My Head" and - of course - "Apply Some Pressure". The new songs initially fitted in quite well, but the quality and pace of the set sagged quite badly towards the end. Current single, "The Kids Are Sick Again", is okay, I suppose, but some of the new stuff is just not up to standard. Take "Let's Get Clinical": For a lyricist as talented and articulate as Paul Smith, this is just lazy:

Is that the best he could come up with? It's a song that tries to be sassy and sexy, but is simply a bass-heavy plod with uninspiring lyrics. And what about this from "The Penultimate Clinch":

"But it's like dismantling
A decommissioned spacecraft.
Some parts you can't destroy."

I realise that they're trying to do something a little bit different, and to broaden out their musical palate (let's be honest, great song though it is, "Our Velocity" is essentially a retread of "Apply Some Pressure", isn't it?), but it's disappointing all the same.

On the whole, it's a decent gig. The high points are pretty high, and they're an interesting band that I really like. It's just a real shame that tonight's set emphasises some of the weaker new material, especially when played in close proximity to real belters like "Our Velocity" and "Apply Some Pressure". Still, they are rapturously received by the crowd, and the band seem to be riding the crest of a wave at the moment, held aloft by some prominent TV slots, radio airplay and some high-profile gigs (they're opening Glastonbury on the Thursday night). Good luck to them, it's always nice to see dear personal friends of mine (ahem) finding some success.

Highlight of the night? Undoubtedly the deliriously happy fan in the red t-shirt on the balcony, obvliviously basking in a spotlight from the stagelights and throwing himself unselfconsciously into a routine that involved booming out the lyrics, over-emoting with his hands and the occasional spot of air-drumming. At one point, I swear that most of the crowd were looking at him rather than at the band. He was brilliant and, I suspect, quite drunk.

So. Overall, a mixed night. I thought the band sounded pretty good, and that most of the old material and a decent slice of the new songs are really good. It's just a shame that some of the newer stuff is noticeably weaker, and that this rather takes the wind out of the band's sails. I'll give them another chance at Glastonbury I think, and I'll see whether another few weeks of living with the new album give it a chance to take root.

Mike's review of this gig can be found here. (Kaiser Chiefs? They're nothing like the Kaiser Chiefs, man!)

I'm away for a few days now, making a fuss of C. over her birthday, but be sure to enjoy your long weekend. Mine will most likely be soundtracked by the superb new Manic Street Preachers album, and hopefully there will be a bit of sun down by the Loire and some wine up from the cellar....
Posted by swisslet at 00:11