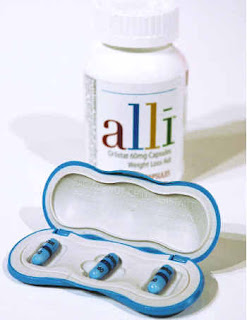 You might have missed this, but the other day, a weight-loss drug was shifted from being prescription only to being widely available over the counter in your local chemists. How is Alli different to the drugs that you've been offered for years in those emails that you might find in your spam folder? Well, it actually works: it stops your body from absorbing approximately 1/4 of all of the fat that you eat as part of your normal diet. As a result, so they say, you are able to lose 50% more weight than you would normally shift through dieting alone - lost 2lb on a normal diet, and you would have lost 3lb if you'd been using Alli.

In theory, this drug is only to be used in conjunction with a healthy, low fat diet. It's only supposed to be used by people with a body mass index of more than 28 (i.e. "overweight"). You can see the attraction, right? Apparently 40% of the population are trying to lose weight at any given time, but I'm not sure I know many people who wouldn't be happy to take a shortcut like this that would cut a bit of extra fat out of their diet without them needing to do a single thing differently. Who doesn't feel like they've over-indulged at Christmas? Who doesn't occasionally feel regretful about that late-night curry or that portion of fish and chips when you couldn't be bothered to cook? Well, if you took Alli, then 25% of that extra fat would simply not be absorbed by your body. It's a "get out of jail free" card. Brilliant, no?

There was a programme on telly the other day talking about the huge surge in the numbers of people getting gastric bands. It showed the healthcare professionals consulting with people who swore blind that they'd tried everything to lose weight and that this was their last chance. It also showed those same people nipping into McDonalds and having a Happy Meal to keep them going until they got home for their tea. In short, it showed that people were resorting to surgery instead of changing their lifestyles; instead of facing up to the simple equation that if calorific intake is greater than the rate of calory burn, then the result is weight gain, these people were going in search of the magic bullet that would help them lose weight without changing a damn thing about their lifestyle. For these people, Alli is simply going to be another form of magic bullet.

There's another type of person who will be desperate to take this drug though: the kind of person who is probably at a perfectly healthy weight, but who, for some reason, wants to lose a bit of weight. They might have body issues (who doesn't?) and want to lose a bit of weight; they may simply want to tone up a bit before their holidays or to go out for a really big meal and not feel like a fat bastard. These people will take Alli. Yes, technically you need to have a BMI of 28 before you can get the drug, but how is that going to stop anyone? The drug company and the retailers know that the diet market is massive and they know that people are going to be swallowing these pills down like candy. How hard are they going to enforce that guideline? Well, judging by the website of one well-known UK high street retailer.... not very. They ask you to confirm your height and weight, and they ask you a few other questions about your dietary habits.... but then they'll happily sell you the drug, with prices starting at £32.95 for 42 tablets. Hell, there's a recession on, you know. You have to make your money somewhere, right? 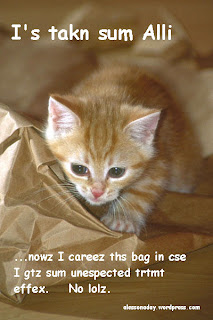 Think you can live with that? Well, apparently it also means that the fat passes straight through your body. You might sit down to enjoy a curry, but you probably won't make it home before some of that richness tries to make an unscheduled exit from your body. Are you ready for that? I know a guy who was on this stuff when it was only available through prescription. He tells me that it doesn't take very long before you realise that a curry simply isn't worth the cost and you give it a miss. Nice.

This may very well be a tremendous aid to helping people lose weight, but you cannot tell me that the prime market for this isn't going to be people who simply don't need to use it. Retailers know this, but they can't see past the amount of money they will make from selling this as fast as they can. They're making a few token efforts to make it look like they're not just selling this to everyone, but really they're just selling it to everybody. In my view, they don't care enough. How long before someone kills themselves with this stuff? There are enough people with eating disorders already, do they really need access to something that will help them starve their body of nutrients and to starve themselves to death? Why has this been shifted from prescription only... when you'd need a doctor to agree that this was a sensible option.... to being readily available instore? Money.

Oh, why am I bothering? You're reading this and thinking you can see the appeal, aren't you? Well, plenty of places will be happy to sell it to you. Be my guest. You might want to buy yourself some more pants, but be my guest.....
Posted by swisslet at 20:08