think of me when you're coming down.... 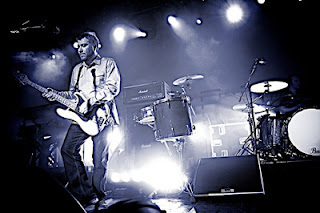 Doves have been around for a while. Whilst it's true that they only technically formed in 1996 and released their first album in 1998, in their previous incarnation as the dance band Sub Sub, they released their very first single, "Space Face", as far back in 1991. I know he looks a little careworn, very much from the same mould as his birdwatching companion Guy Garvey, but I think that bassist and singer Jimi Goodwin is actually looking alright for his 38 years. Twin brothers Jez and Andy Williams also both look pretty well-preserved for their 39 years. Regardless of their ages though, Doves are one of those bands that actually sound like they've been around the block. There's a maturity to their sound, as well as a certain considered dolefulness and resignation that is surely borne of hard won experience. They have a calm, still stage presence too, with none of the band being particularly prone to bouncing around, focusing instead upon the precision of their playing. Onstage, Doves seem almost stately, each band member totally in control of what they're doing and comfortable with where they're going.

As you might expect for a band who have had two number one albums in the UK (as well as two nominations for the Mercury Music Prize so far out of their four albums), Rock City is pretty busy tonight, in spite of the distinctly Arena-like £18 a ticket price. The touts are out in force at the front of the building, where they seem to have some sort of pragmatic understanding with the bouncers that allows them in to make use of the facilities when required. The audience is probably exactly what you might expect, too: there's no beer chucking in the venue tonight as this is (spiritually, at least) an older, wiser crowd. They might have some nifty films projected onto the screen behind them, but Doves are a band that don't really need any gimmicks. It's all about the music. What else do you need?

Before the gig, I made a point of listening to both of the Doves albums that I own (The Last Broadcast and Some Cities). I was a little surprised by quite how good both of them sounded, to be honest, with The Last Broadcast in particular sounding absolutely superb (even if listening to the albums made me realise quite how much their music is used by TV companies as backing tracks). They sounded so good, in fact, that I found myself wondering why on earth I hadn't listened to them more often. I've seen them several times live too, and they've been great each time, although I've only ever seen them supporting someone else or appearing at festivals.... they're not a band that I have ever paid to see, a streak that continues tonight by virtue of being the Evening Post reviewer's "plus one" for the evening. They're a band that I like, a band that I admire, but they're not a band that I love. I liked what I'd heard of the new album, so I was really looking forward to the gig: was this going to be the moment that Doves really worked their way into my musical affections?

Everything was set up beautifully: we had a good spot, the sound was good, the crowd were up for it, the band have some fantastic songs and were playing them brilliantly..... but something just didn't click for me. Perhaps it's that I don't know the songs well enough, but although I thought that the band were very good, I found it hard to get especially involved with what was going on around me. The band were clearly enjoying themselves, but they don't really give a great deal out to the crowd, and their enjoyment seemed manifest itself more as a quiet satisfaction than in any particular need to rouse the crowd. To be fair, they were being rapturously received by the majority of the audience, so perhaps they were doing all they needed to do. The songs are good, but - to my ears, anyway - they all seem to be in a very similar key, and after a while, it becomes hard to tell them apart. Goodwin has a lovely, mournful, soulful voice, and he often swaps lead vocal duties with guitarist Jez Williams and, on one occasion, with drummer Andy Williams. Their voices are all different, and Jez Williams even sings one song in a falsetto, yet the overall effect is that the songs still started to blend together in my mind. If their new album is a great stylistic stride forwards, as some critics have hailed it, then I certainly couldn't hear any great difference in their live set.

That's not to say that I didn't enjoy the gig, because I did. "Pounding" and "There Goes the Fear" were highlights, of course, but the real treat was saved for the very end of the set, after the encore had finished and the microphones had been switched off, when Goodwin came back on the stage, insisted everything was turned back on and then dedicated one final song to "Nottingham's ravers"...... and the band launched into "Space Face", that very first Sub Sub single from way back in 1991. It sounded brilliant.

Perhaps it's me, but I wasn't quite sold. A really good gig will pick you up and sweep you off your feet and take you somewhere else, but my feet stayed resolutely planted to the (slightly sticky) dancefloor all night. Good band. Admirable band. Decent gig. I might yet buy the new record. But for me, at least, something is still missing. Elbow, a band to whom Doves will inevitably be compared and with whom they share much spiritual ground, exude an easy warmth from the stage and are thus easy to love. Doves are cooler and lack some of that easy charm. That shouldn't - and doesn't - affect the quality of their music, but it does make them harder to love....

Good, but not great.

Mike's interview with Jez Williams can be found here, and his review of this gig is here.
Posted by swisslet at 19:17