Think global, act local. That's a maxim that we should all hold close to our hearts, right? Well, I wouldn't say that global warming was exactly my prime motivation, but just the other day I took some decisive action to combat the volume of traffic on my own street, and also helped to make the journeys of the people around me a little shorter.

How so? Well, by sending an anonymous email to the Parking Enforcement department of my local council. Of course! How else would you do it?

Let me explain. There's an old guy who lives on our street. He drives an old "S" registered Skoda and he likes to park outside his house. I don't know his domestic situation, but he used to have a woman - his wife, I assumed - living at the same address. He also used to have a disabled parking space marked on the road directly outside his front door. Barely anyone has off-road parking on our street, and everyone is forced to park on the road. Space is often at a premium. Perhaps not surprisingly, this chap was very protective of his space.

Hang on, this is getting complicated. Figure 1 below illustrates how the pavement was laid out directly outside his house.

So, as I was saying, this chap was very protective of his space, and although it was marked out very generously on the road, he always parked his car so that his front wheels were on the edge of the markings, not the end of his car. This left a generous half-a-car sized space at the back of his car, and it reduced a three car parking bay so that it could only accommodate two cars.... as illustrated in figure 2 below.

Well, I'm not sure that's very sociable when space is at such a premium, but perhaps he needed that extra space for some reason. He seemed perfectly mobile, and his wife wasn't confined to a wheelchair, but what did I know of their needs? For the most part, I bit my tongue, ignored the fact that he was consuming two spaces, and drove further away from my own house in search of a parking space. He was a note leaver, too. Anyone who encroached on his disabled bay would find themselves with a poorly punctuated note behind their windscreen wiper.

One day, I came home to find the council burning the disabled space markings from the road. I've not seen his wife for a while either. I have no idea if she left him, or she died, or what, but clearly she was no longer resident at that address, and they were no longer entitled to the disabled parking bay. Did this change the guy's parking behaviour? No. He still parks his car so that he only leaves enough room for one other car in the space. Worse yet, he has now taken to blocking out "his" space with traffic cones when he's out and about in his neat little car. See figure 3. 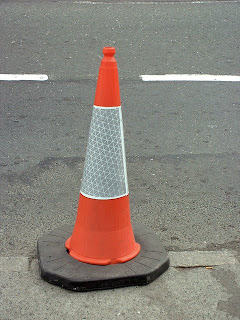 This annoys me. Whatever his requirements when he actually was entitled to a disabled parking bay, the fact that he is no longer entitled to that space means he has no right to block out the space in front of his house as his own personal fiefdom. I'd like to always park in front of my house, but I can't. If he blocks out his own space, then he forces people like me further down the street just so he can park where he likes. It's simply not on.

So I complained. Anonymously. Via the council website. It felt good.

Before you judge me, there are other good reasons to have shopped this guy:

-> he's the prime suspect in the mysterious anonymous note about our cat. The poor spelling and random punctuation has his hallmark all over it. And we know he's a note leaver....

-> When he thought no one was looking, he took the broken Dyson out of the skip outside our house the guys using the loft extension are using. The nice lady who put it in there had actually knocked on the door and asked if it was okay, this guy just came over to see what he could scavenge. Later on, presumably once he had discovered that the Dyson was, in fact, broken... he dumped it back in the skip. Once he'd salvaged it, to my mind and probably to his, that Dyson now belonged to him. He didn't ask if he could put that back, he just chucked it in. If I'd seen him, I would have told him to take his damn rubbish to the dump and not put it in my skip.

-> He has a CCTV camera set up above his door. It used to point down at his door, and so presumably was some kind of deterrent to burglars. Now it's pointed at "his" space, presumably to see if anyone unauthorised parks there or moves his traffic cones.

-> Sometimes he uses yellow police traffic cones. He can't be allowed to use them, surely?

-> He's a leathery old guy and he likes to walk around in really tight white shorts with no shirt on. No one should have to put up with that.

-> He washes his car obsessively every Sunday. Including the wheels.

Ok, perhaps that last one isn't a very good reason, but when he does it as his car is taking up two spaces and we're parked several streets away...well... it's like he's taunting me. Especially if he does it with his shirt off.

Compare and contrast his approach to his space with the people who moved into a house at the end of the street a few weeks ago. They too have a disabled space outside their house, but they've put a little note on the tree just behind the space to say that they don't need the space, that they've asked the council to remove it, and that everyone should feel free to park there as they like. Now that's more neighbourly, isn't it?

I'm not sure complaining anonymously did any good - the cones still appear occasionally, although perhaps less often than they used to - but it certainly made me feel a whole lot better.

Local action. I feel so empowered.

[This is why they installed Visio on my laptop at work, right?]
Posted by swisslet at 21:12