Sad news: my much loved Kukuxumusu Barcelona t-shirt has finally bitten the dust. I bought it in September 2001, a day or two after we'd sat in a bar in Madrid next to the Bernabeu and watched with horror the collapse of the World Trade Centre buildings. 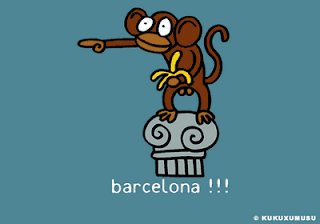 It came from a little shop we found on the backstreets of Barcelona somewhere behind Las Ramblas. All of the t-shirts that they stocked featured distinctive cartoons, but I was particularly taken by one that mimicked the famous statue of Christopher Columbus that stands atop a column in the port, replacing him with a money and his telescope with a banana. I especially liked the fact - and I only noticed this later - that the monkey's cojones are on full display.

Eight years is a pretty respectable age for a t-shirt to perish, and truth be told it was probably on its last legs anyway, but the end finally came courtesy of my cat. We had a mouse, you see. It was sitting, bold as brass, on the back doormat. At this point, the cat was busy eating kibbles at her bowl, and by the time she had wandered over to see what all the fuss was about, the mouse had disappeared behind the kitchen units. The cat now had the scent, but surely no mouse would be stupid enough to make a return appearance.... ah.... there it is again. The cat pounced, and as cats do, she proceeded to bat the poor little rodent around. Claws in, naturally. After all, you wouldn't want to actually hurt it, would you? Not right away, anyway.

Nature might be raw in tooth and claw, but the cat usually catches leaves, scotch eggs and moths, and I wasn't entirely convinced that she knew what to do with a real, live mouse. I couldn't watch this, and decided to intervene. As C. tried to catch the mouse to take it outside, I held onto the cat. Well, I tried to hold onto the cat, but she was high as a kite on her instincts and was really quite keen to get back to her mouse. By the time we'd got the mouse outside and I was able to put the cat down, she'd managed to make quite a mess of my t-shirt. My much-loved, difficult, if not impossible, to replace t-shirt.

But, ah.... we live in the age of the Internet. I don't need to go back to Spain to buy another Kukuxumusu t-shirt, I just need to go to their website. I'd have liked a direct replacement if I could find one, but - no surprise - they don't make it any more. Still, there's plenty of other choice.

Too much choice, as it turns out. 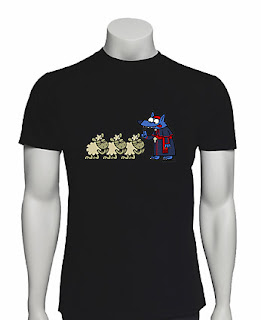 A cardinal as a slavering wolf and his flock as unthinking sheep? Ah yes. 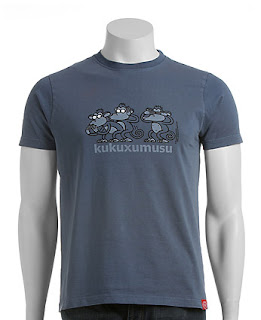 ...and because I'll miss the colour and the monkey of my old-t-shirt, I bought this one too. Instead of swinging cojones, we get monkey's shagging. Classy, no?

I'm not sure I can quite bring myself to throw out the ruined old one either.

My name is ST and I'm hopelessly addicted to t-shirts.