I've been watching cricket for a long time now. I have been unlucky enough to actually be present in the ground to watch Australia retain the Ashes three times at Trent Bridge: 1993, 1997 and 2001*. I've seen Shane Warne dancing with a stump on the pavilion roof twice. It's a good job we won the game there in 2005 as I'm not sure the old timbers of the building could take any more of that kind of strain. 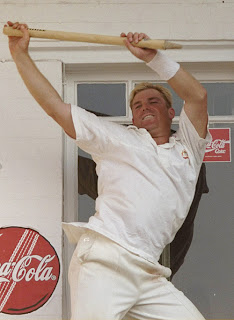 There was no Trent Bridge test this time around, and no Shane Warne, but I was lucky enough to get hold of a pair of tickets for the fourth day of the last Test match at the Oval. The series was nicely poised at 1-1 going into the game, and the England selectors resisted the calls to give Mark Ramprakash one last hurrah at his home ground. Having seen him charging down the wicket in Nottingham towards the close of play on the Friday Ashes Test in 2001, completely ruining my Saturday by his inability to resist Shane Warne's taunts, I was pleased I wouldn't be seeing him playing in a game of this importance. I wasn't sure about Jonathan Trott, making his debut in this game, but surely he couldn't be as catastrophic and negative selection as the 39-year old Ramps.

The terracotta urn containing the Ashes is only 6 inches tall, but England and Australia have been fighting over them since 1882, and it remains the single greatest prize for an English cricketer. 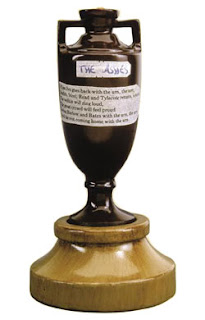 When England finally won it in 2005, for the first time since 1986/7, it was a cause for national celebration. Over-celebration, many would say, but after such a long period of Australian dominance, it was simply joyous not only to win the Ashes, but to win them in such an incredible series.

After a 5-0 thumping in Australia in 2006/7, there can't have been too many people who gave England much of a chance this summer.... but we did it. We went into Sunday needing ten wickets to win. That was all we needed to do to bring the Ashes home. It wasn't exactly plain sailing, and the Aussies fought like...well.... Australians, but at a little after 6pm, when Graham Swann took the wicket of the superb Mike Hussey it was all over.

We had regained the Ashes. 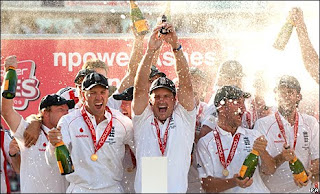 And I was there. I saw every ball bowled; every wicket fall and -- best of all -- I saw the England captain, Andrew Strauss, lift that famous old urn.

I've been lucky enough to have seen some brilliant sport: Allan Donald and Michael Atherton at Trent Bridge in 1998; the amazing Ashes test in 2005. I've seen Europe winning the Ryder Cup at the Belfry in 2002 and at the K-Club in 2006. I was in the Olympic Stadium in Athens when Kelly Holmes won the 800m. I was at the rowing lake at Schinias in Athens when the Men's Coxless Fours, led by Matthew Pinsent, won the gold medal by the tiniest of margins.

How does this day compare to those? I'm not sure. All of those were fantastic in their own way. As a big cricket fan though, and having suffered through 20-odd years of awful, heartbreaking England performances, actually being present in the ground when we won the Ashes was pretty bloody special.

Let's hope we can enjoy the win without gloating, eh? There's little less attractive than winning without dignity and then wallowing in that win instead of looking forwards. For what it's worth, my favourite moment of the day (winning aside) was when the crowd gave Ricky Ponting a massive standing ovation both to and from the wicket. He was booed at Edgbaston, but he was shown an awful lot more respect here for what he's achieved. It's no less than a champion like him deserves. 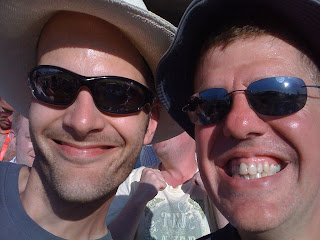 It was a very good day.

*actually, Australia held on for a draw in 1993 - the first test match I ever went to go and watch live - to keep the series score at two up with three to play. Needless to say the Aussies won the remaining tests that mattered to win the series 4-1. It just felt like they retained the Ashes that day when we failed to get Steve Waugh and Brendon Julian out. I had a nice day though, eh?
Posted by swisslet at 22:07