I hate to wake you up to say goodbye....

For the last seven days, C and I have been playing host to the most delightful Austrian family. These are the same guys who pretty much single-handedly organised our wedding in Vienna a couple of years ago, so it's really been the very least that we can do to put them up for a few days and to spend some time showing them around our country. Actually, it's been a real pleasure having them around - it's hard not to have a ten year old boy and an (almost) twelve year old girl around the place and not have it brighten your day. Not ones as well behaved and charming as these two, anyway....

They arrived 11 days ago, but spent the first few days of their holiday in London, doing stuff like looking at the Tower of London, riding around on an open-topped bus and things like that. I went down to join them on Thursday last week, and we spent the afternoon in the Science Museum at the Wallace and Gromit exhibition they've got on at the moment (the highlight of which was when we spent a good half an hour making plasticine models of a Frankengromit and a punk rock guitar playing pinocchio). We then all got the train back to Nottingham and spent a couple of days doing things like pottering around town (Susie and Lilli were very taken with the shopping in town, which is apparently quite different to the kind of thing that they get in Vienna), trying out archery at the Robin Hood Festival in Sherwood Forest and learning some circus skills and watching the fireworks at the Riverside Festival. 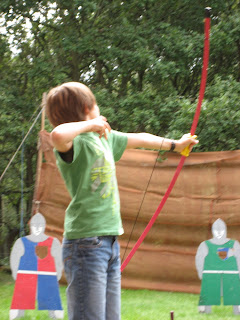 I spent the weekend in Birmingham watching the Edgbaston Test Match, but Pauli is very keen on sport generally and was very keen to learn as much about cricket as he possibly could. On Friday morning, I spent the hour or so before play started trying to explain the basics of the game, and then when England took two wickets with the first two balls of the day, I spent much of the rest of the day trying to explain that it wasn't always like this, and usually you have to wait a lot longer to see anything happen. There's not much cricket in Austria, I shouldn't think (actually, it seems that there is), but I think the bug took hold and I did everything I could to help it take hold by sending Pauli home with a real cricket ball, which he thought was the coolest thing in the world ever.

On Tuesday morning, the six of us piled into my dad's stylish Hyundai Trajet and drove up to York. We'd borrowed it for this very purpose, so that we could all travel together in the one car. I spent much of my childhood sitting in the back of a Fiat Strada, shoulder-to-shoulder with my two brothers, being driven the long miles to visit my grandparents in South Wales or in Plymouth. Quite why my dad waited until we'd all left home before he buys a people-carrier, I really have no idea. Still, it was undeniably useful. In York we walked along the walls, had a quick look at the King's Manor where I studied for my Masters degree, and wandered around York Minster. There is a lot of monumental architecture in Vienna, of course, but much of it is from the Baroque period. York Minster is in the gothic style and as a Protestant Church is quite a lot more austere. 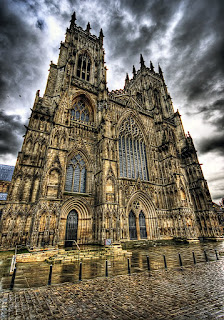 I regret the fact that the Church have felt the need to put in turnstiles and to charge £6 per person for admission... as I looked at the people in their baseball caps and eating their ice creams, I couldn't help but worry that the admission fee encourages people to treat this magnificent building in the same way as they do any other tourist attraction... but it remains the most splendid, light and airy building, and it always manages to lift my spirits. I'm not in the slightest bit religious, but I am a historian, and I am always moved by the thought of the sheer effort involved in putting these buildings together. I hate that Nottingham has nothing like it. 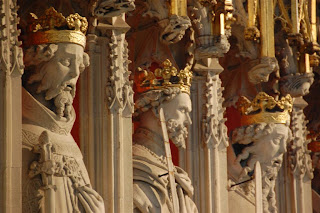 After admiring the street theatre next to the Shambles, we hopped back into the Trajet and headed up to Durham. As well as being a charming town with another magnificent cathedral, our trump card here was that we were going to be spending the night in an actual, honest-to-goodness Castle. The rooms of University College Durham might not be much to write home about, but the building itself, especially when seen through the eyes of a ten year old, is splendid: all crenelations, wonky staircases and creaky doors. 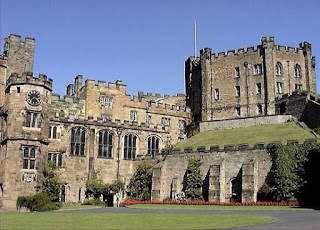 I prefer York Minster, but even I had to admit that Durham Cathedral isn't too bad - and has the enormous benefit of not being as overrun with tourists as York. 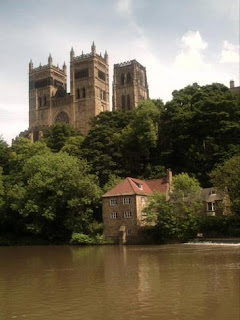 Those Prince-Bishops really knew where to build a church, eh?

A short stop at the seaside to have a paddle in the North Sea, and we were back to Nottingham and then on to Luton airport this morning to send them home. 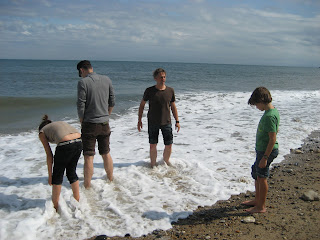 I'll miss them. Of all the things we've done together over the last week, I think the ones that the kids will remember the most will be the simplest: playing football in the park, leaving their bedroom doors ajar in the hope that the cat will pay them a visit in the night, teaching me German, learning English tongue-twisters ("Peter Piper picked a peck of pickled pepper...."), playing Guitar Hero (they're from a very musical family, so it wasn't long before Pauli was playing "Strutter" on hard with his eyes shut.... literally) and having a ride in my mini. The two kids think we're the coolest people they know, which perhaps tells you a lot more about Vienna than it does about how cool we are, but it's a lovely thought. It's been a great week and, whilst it's nice to have the house back to ourselves, it definitely feels a touch empty tonight. 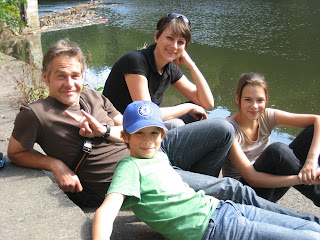 It was a touch like living with the von Trapp family at times though, and they serenaded us at dinner last night with a version of "Leaving on a Jet Plane", led by 12 year-old Lilli on guitar. Not a dry eye in the house.

Come back soon please.
Posted by swisslet at 19:30