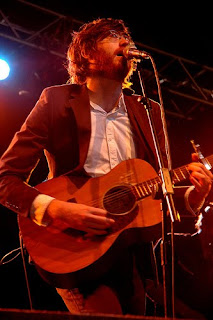 A band that name themselves after a short story by Russian author Tatyana Tolstaya can only be a barrel of laughs, right? Right? Well, I first heard of Okkervil River when Mike included "Life Is Not A Movie Or Maybe" on my 2007 Shuffleathon CD. It's a great track, and although I liked it immediately, it's one of those songs that seems to have got better with every listen. I was intrigued enough to go out and buy the album, "The Stage Names". And....well.... it's okay but I'd already got the standout track. It's probably one of those albums that I need to give more time to breathe, but it just hasn't grabbed me enough to get much airplay. Still, I was disappointed to miss the band last time they were in town (I was at a gig somewhere else on the same night, if memory serves me correctly), and was keen to get grab my chance to see them live when I saw they were playing the Rescue Rooms this time around.

I very nearly forgot, too. Ninety minutes of football, and my plans for a long leisurely shower and a lazy evening were ambushed by a text from Sarah asking if I'd bought a ticket in the end. Shit. The gig. Somewhere in the back of my mind (and in the front of my diary) I knew that I was supposed to be attending this gig, but somewhere along the way I'd managed to forget. Nevermind, I still had enough time to grab a bite to eat and to head into town to meet up with Sarah and Mike in the RR bar - which was already filling up nicely with earnest, bearded types.

The gig? Well, perhaps I should say that there were an awful lot of people there who seemed to know the band's material really, really well and who really enjoyed themselves. I don't know the band's material all that well, and I found them, and singer Will Sheff in particular, to be overly earnest and the material live sounds more country than on record. At one point, Sheff approached the microphone to tell us about the pressure he felt to think up witty rejoinders to members of the crowd who shouted things at him from the darkness in front of the stage. "It's not my job to think up witty rejoinders!" he cried. No, but it is your job to entertain me, and frankly I wish you'd start. I was not grabbed. In spite of their country sound, when the keyboardist at the back grabbed a trumpet, I was oddly reminded of James fronted by a lesser singer, albeit one with a good deal more hair. It was a comparison that made me think how much I liked James, and my mind began to wander to which album I would dig out tomorrow. Not really a good sign for Okkervil River's hold on my attention, eh?

To be fair, things looked up when one of the keyboard players picked up a guitar and they began to play much more muscular material, including a decent version of "Life Is Not A Movie Or Maybe" (still far-and-away their best song). I even began to enjoy a few of the slower songs, some of which sent parts of the crowd into raptures (why do people shout out requests at bands? Isn't that what setlists are for? And if you're shouting for one of their best known songs, really... what's the point?). Perhaps the band had always been good and I was just warming up? Perhaps they're the kind of band that I would only really enjoy live with a slightly more than casual knowledge of their material?

Hmm. Even then, I suspect they'd still be overly earnest.

I'll have to give that album another listen, but they didn't do very much for me live... although, to be fair, clearly they did for a decent proportion of the audience. Still, I haven't been to a gig for a couple of months now, so it's always good to get out of the house, right?