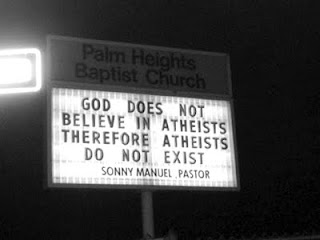 So there we have it: Pastor Sonny Manuel provides people passing the Palm Heights Baptist Chuch with the definitive answer to a conundrum that has been exercising philosophers for years.

Well, he almost does. I think he's actually trying to be funny.

...or maybe he's simply an accomplished surrealist? Isn't everyone in his line of work?


Dawkins rates himself as between a 6 and a 7: "I cannot know for certain but I think God is very improbable, and I live my life on the assumption that he is not there." He goes on to add that "I am agnostic, but only to the extent that I am agnostic about fairies at the bottom of the garden." His point is that although not many 'atheists' would score themselves as a 7, how many Christians would score themselves as anything other than a 1? I get the distinct impression that Pastor Sonny Manuel would score himself as a strong 1, don't you?

Still, they're easy targets, aren't they? Let's all have a laugh at those weird religious nutjobs and the funny signs they put up outside their churches. The sign above comes from a list of similarly idiotic signs that can be found here and was kindly sent to me by the numnum, but laughing at them seems to be a pretty popular sport: just go and look at Google and you'll see that the internet is full of them. An awful lot of them.

Surely they're not representative? For every one of those, there must surely be hundreds of perfectly reasonable signs outside churches, put there by nice, moderate people?

But why am I asking Google? 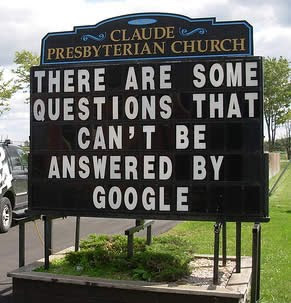 (That's certainly true, but am I alone in thinking that Google has probably provided more actual answers over the years than prayer?)

Then again, in the cold light of day, is saying something as sanctimonious, judgmental and smug as "I kissed a girl and I liked it... and then I went to hell" actually all that much more ridiculous than saying "When the Son of Man comes, will He find Faith on the earth?" (Luke 18:8). Both statements ultimately display a level of certainty that I suspect leaves little room for rational debate. There was one outside the church around the corner from me the other week loudly declaring that "JESUS IS HOPE". There's not much room for doubt or negotiation there either.

Of course, as long as they don't insist on inflicting it on anyone else, people are entitled to believe what they want. If you ask me, I think that we'd be a whole lot better off basing our society upon the utopian ideals of the Wyld Stallyns: 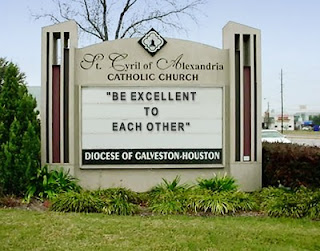 Now just tell me the world wouldn't be a better place if we all lived by that one simple adage?

Here endeth the lesson.
Posted by swisslet at 16:34