...and I'm saving the world at eight. 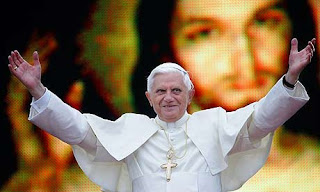 Join me! All welcome (offer may exclude women, homosexuals and other minority groups....)

So I see that the Pope has generously decided to allow Anglican clergy to return to the loving arms of the Roman Catholic Church. This is quite a big deal: it's probably the first time since the Reformation in the Sixteenth Century that whole communities of Protestants could be allowed to return to the communion of the Catholic Church. Over the years, untold thousands, perhaps millions of people, have died in conflict between the Catholic and Protestant churches. They've died over their differing beliefs in things like Bibles written in languages other than Latin; over whether or not the host at the communion literally, or only figuratively, turns into the body of Christ; about whether or not churches should be covered with statues of saints or not..... interesting points of discussion, perhaps, but surely not worth fighting and dying over? But fight and die they have. It's not just the wars either - people have been burnt at the stake because they refused to renounce a belief in what language they should be reciting their services in at church. Sir Thomas More, was one, but there were many others... all died because they weren't prepared to do what Henri IV of France seemed prepared to do at the drop of a hat: to recant and join whichever religion it was that was threatening to kill him (usually Catholicism).

So isn't it good that the Pope has offered to cast aside centuries of enmity to bring two sides of the christian faith together? But after centuries of emphasising their distinctness from Catholicism, why would any Anglicans take him up on his kind offer?

Ah, of course... because they've got the proper hump at the Anglican policy of ordinating *gasp* women into the clergy. Yes, ridiculous though it might sound to you and to me, but there are people for whom this one issue is divisive enough that they will cross the Tiber to join the church of Rome over it. Bugger any other canonical issues they might have, bugger the fact that they may well be married and will be joining a priesthood that is supposedly celibate.... no, the idea that women should in any way be considered to be remotely qualified or even appropriate for the clergy is enough to send some people running into the arms of the Roman Catholic Church.

Women in the church? Imagine that. Surely there's nothing in the otherwise famously tolerant and inclusive Holy Book that might lead anybody to think that women should be ordained is there?

Here's what Forward in Faith, a traditionalist strand of Anglicanism, has to say on the matter:

First, it is a practice contrary to the scriptures as they have been consistently interpreted by the two thousand year tradition of the churches of both East and West.

Second, we hold that the ordination of women by individual provinces of the Anglican Communion, without inter-provincial agreement or consensus, is a schismatic act, impairing communion between provinces by subverting the interchangeability and mutual recognition of orders between them.

Third, mindful of the unity for which Our Lord prayed on the night before he died, we are bound to repudiate an action which has willfully placed a new and serious obstacle in the way of reconciliation and full visible unity between Anglicans and the Roman Catholic and Orthodox churches. "

(The vicar of my mum and dad's parish is, of course, a fully paid up member of Forward in Faith)

They might actually have something with that second point: the Anglican church has always been something of an unlikely alliance between some sometimes quite different strands of Christianity, with a kind of non-papal Catholicism on one side, and a more Lutheran or Calvinist Protestant faith on the other side. The Communion is an alliance between these different strands; although they might differ on the specifics of their beliefs, especially over the Communion, they were all still grouped together as one big happy family. A priest in one branch of the Anglican Church would be recognised as a priest by every other branch. The ordination of women has changed all of this, because not all branches of the Anglican church subscribe to it, and therefore will not recognise the authority of any female Anglican priests. Mind you, I'm not sure what an influx of married Anglican priests will do for the Communion of the Catholic church, but there you go....

It's almost impossible to escape the impression that these people are primarily pissed off because their little boys club has been opened up to the girls. They can hide behind the Bible all they like, but as long as their are passages in that book that they don't take literally, then I don't see how they have a right to be so literal in their interpretation of the rest of it:

Any person who curseth his father or mother must be killed~Leviticus 20:9

Entrance into the assembly of the Lord was granted only to those with uninjured testicles and a complete penis ~Deuteronomy 23:1

People who have flat noses, or are blind or lame, cannot go to an altar of God ~Leviticus 21:17-18

Yes, yes... it is a book that was written thousands of years ago and for a very specific society. Times have changed. We certainly can't be expected to take all of it literally nowadays. The thing is though, what is it that makes you think you can pick and choose the bits you like to interpret literally and the bits that you don't? If you accept that those passages aren't to be taken literally, then how seriously should I take your interpretation of what jobs a woman should or should not be allowed?

Of course, these disaffected Anglicans who are looking to cross the Tiber to the Roman Catholic Church are not looking to leave the Anglican church armed only with their principles. Oh no. They want compensation too:

As the Rev Geoffrey Kirk told an audience at a Forward in Faith assembly: "The Hebrews did not leave Egypt empty-handed. We must now apply ourselves to the task of securing our buildings and assets. We must ensure – for its own good and self-respect – that the Church of England is as generous in its dealings with us."

Good luck with that.

I suppose, as a disinterested observer to the whole thing, instead of getting all worked up about it, I should really just take a seat and enjoy the bun fight.

The New Humanist is clearly doing just that:

"In a gesture which dramatically parallels the recent “come-and-join-us” invitation from the Pope to disaffected Anglicans, the Rationalist Association has opened its door to thousands of can’t-quite-decide agnostics. A spokesperson for the RA (publisher of New Humanist) pointed out that many agnostics had been unhappy for years about the manner in which their uncertainty about God’s existence played into the hands of religious apologists. New recruits to the RA were given some reassurances.

“We are,” said the spokesperson, “not at all averse to agnostics maintaining some traditional forms of speech, such as ‘You can’t help feeling that there is something up there’, but obviously they’ll be expected to gradually forsake their uncertainty about who made the world.”

In a further gesture of conciliation, the spokesperson confirmed that new recruits would not initially be expected to recognise the infallibility of Richard Dawkins"

Initially. Hehehe.
Posted by swisslet at 19:20