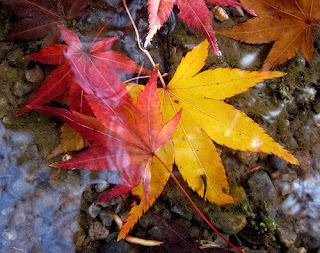 As we were driving to work this morning, an innocent conversation about the mist rolling off the river and the number of trees now entirely without leaves suddenly mutated into an argument:

Winter's nearly upon us, I remarked.
Well, said C, actually winter doesn't start until 21st December.
Really? Isn't that the shortest day? Wouldn't you associate that with the depths of winter?
No. It's the winter solstice and it's the official start of winter.

We carried on the debate after we reached the office, with C. sending me something from wikipedia, and me retaliating by sending something back from the met office. As these things tend to do - at least with me - what I thought of as being a trivial, light-hearted discussion seemed to quickly be descending into a surprisingly bitter argument. I'll never learn: just as my dad remains convinced that I used to do a deliberately bad job of mowing the lawn just to piss him off, C seems equally convinced that when we have a discussion like this, I am driven to not only to prove her wrong, but to make her look foolish. Perhaps that's the way it seems, but all I'm trying to do is to understand the basis of the argument. I hope I'm not too grudging when I am proved wrong, but I do like to be swayed by evidence. It's probably my historical training, but even on a subject I know nothing about, I'll never accept anything at face value; I like to be presented with at least some sort of evidence.

I'm the first to admit that this isn't always an attractive trait, and I know that it can have its dark side: I used to maintain that no one is ever more than 80% sure they're right in any particular discussion. With that in mind, I would sometimes chose to make it my position to push at the 20% that wasn't so sure of themselves. All this was originally intended to do was to explore the uncertainty and test the evidence, but in the heat of debate, this probably transformed all too often into a desire to push someone off their point. No matter that the other person may well have been originally more sure of their own argument than I was of my own position, I still found that I could push most people into questioning their own certainty, if not actually making them back down entirely.

I like to think that I've realised that's not actually a very nice way to behave, and it's something to be held back for special occasions. However, in even the most trivial discussion, I have a certain curiosity that compels me to ask questions. It often gets me into trouble at work (in spite of the fact that my analytical brain is the reason I was hired to do this job), and it also gets me into trouble at home.

Why is the shortest day the start of winter?
If it is the start of winter, does that mean that summer doesn't start until 21st June?
If that's the case, why is Midsummer's Day traditionally celebrated on 24th June? Is summer only 6 days long?
When would you say Spring starts? I suppose technically, by this logic, it would be on 21st March - the Spring Equinox. If that's the case, then why is the 1st March called the start of Spring? Is 20th June really still Spring?

Even as C. sent me the wikipedia link, I started searching for more answers.

It seems that winter is traditionally held to start in the UK on 21st December, and has apparently been so for thousands of years, based upon an observation of the stars and the length of the day. Meteorologists don't seem to have much truck with this, and the Met Office for one has the seasons neatly parcelled up: Winter - 1st December; Spring - 1st March; Summer - 1st June; Autumn - 1st September.

But it's all quibbling, isn't it? Aren't the seasons dictated by things other than by dates? The change of the season cannot be marked on a calendar and does not happen at precisely the same moment every year.... there isn't a clock that dictates when birds migrate and animals hibernate; there isn't a calendar that can tell you when the leaves will fall from the trees or when the daffodils will bud. It changes from year to year and is affected by all kinds of things, both natural and manmade...................

And so it goes. More or less every single thing that anyone ever says to me is run through this kind of an internal process, with a succession of questions popping up that can never be fully answered; even if they could be, there are more questions following them up close behind.

I'm not sure why I'm driven to ask these questions, and perhaps more pertinently, I don't know why I haven't yet learned when to stop asking them. I should probably at least be more aware, as I ask all these questions one-by-one, that increasingly the best I can hope for is that I don't lose all my friends by making them feel like they're in front of some kind of ranting inquisition 24/7.

I just can't turn off my brain. Like the scorpion in the fable, I may drown us all simply because it's my nature.
Posted by swisslet at 22:40

Email ThisBlogThis!Share to TwitterShare to FacebookShare to Pinterest
Labels: C, marriage, me