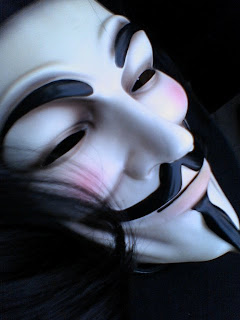 I noticed, about halfway round my run this evening and some nine days after Bonfire Night, that the big charity bonfire in Wilford was finally out. It was still burning when I ran past yesterday evening, and if they hadn't clearly raked it over at some point today, then I'm sure it would still have been smouldering away merrily tonight.

Nine days is quite a long time for any fire to be burning, I would say, but if you factor in the fact that it has been hooning it down pretty solidly every day since the bonfire was lit, then you'll agree that this was quite a big bloody fire. It's so big, in fact, that the organisers of the event apparently have to get a structural engineer to put it all together. It's literally the size of a large house, and this year, they had to build it twice when some of the local youth thought it might be amusing to set the pile alight a week before bonfire night.

That pile of ashes was still smouldering sadly as the organisers somehow managed to conjure up another massive pile of wood alongside so that the show could go on.

Not that I've given this much thought, but a bonfire of that size must burn pretty hot, right? Wouldn't that make it a really good place to get rid of a body? If you could get it into the woodpile somehow, surely it would then burn so hot that nothing would remain? And even if someone did see a man-shaped silhouette in the flames, given that it's traditional to burn effigies at this time of the year, wouldn't they just mistake it for another Guy?

Just as a point of interest and as a terrible history bore, I feel I should point out that Guy Fawkes wasn't burned at all.... he was actually sentenced to be hung, drawn and quartered, but was so weak from his torture that he never made it past the hanging bit, sensibly deciding to jump from the gallows, breaking his neck. Spoilsport. 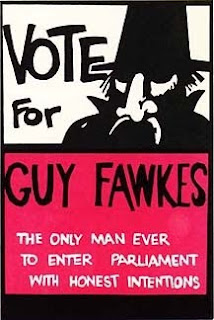 It seems to me something of an overreaction that he is still such a reviled figure in this country some 400 years after the Gunpowder Plot.... perhaps he'd seen the register of Parliamentary expenses and they were afraid he'd publish?

Isn't it time we got over it?

If we must burn effigies of a catholic in a massive bonfire every year, might I humbly suggest we move on to Tony Blair?
Posted by swisslet at 21:40