better get this party started.... 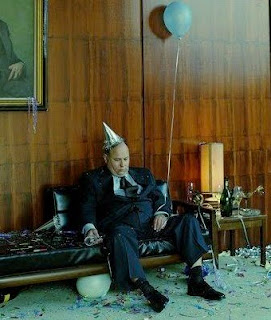 It's office party season.... as I was reminded at 01:30 this morning when C. -- who doesn't usually drink much at all -- barreled into the bedroom, woke me up and breathlessly told me the same story four times, telling me between each telling how she was really very, very drunk.  She'd been drinking cocktails, you see.  Funnily enough, she told me the same story again this morning too....

Not everyone likes to have their office party in the evening though, and plenty of people have been nipping out at lunchtime to grab a meal at some of the exciting venues to be found around the office: Frankie and Bennys, Chiquitos or Nandos in the Showcase Cinema car park, the clubhouse of the nine hole golf-course just outside the main gates.... heck, Hooters is only a short drive away if you really want to push the boat out.

You don't even have to leave the office to have a team Christmas do: the company that provide the overpriced and under-delicious catering in our canteen offer a very reasonable deal where you can have a three course dinner and coffee for a mere £10.95 a head.  Now, I'm sure that their fan of melon, turkey roast and Christmas pudding are all very tasty and everything.... but for me there is no sadder sight in the world than a group of people sat in a meeting room wearing paper party hats, around a meeting room table covered by a white paper tablecloth, being served stale coffee out of a flask by the surly canteen staff wearing santa hats.  I've walked past that room at lunchtime almost every day over the last couple of weeks, and I'm not sure I've seen anyone in there smiling yet.  Happy Christmas team, and thanks for all your hard work, eh?

Mind you, my team aren't having any kind of a Christmas do at all, so what does that say about us? I'd say that it pretty much sums up the team spirit at the moment.  Forget the Christmas break, I can't wait until January 22nd..... my last day in the office for some 8 months...... Although having said that, I'm already starting to think that I might actually miss some of the people I work with, and I spent a little part of today making a special effort to thank a few people for their efforts over the last year.  Almost no one ever says thank you to me at work, so I do try to make sure that I behave a little differently and spread the love around the little.

Good grief.  The onset of nostalgia about my job?  Must be time for a break.

I'm heading off down to my parent's for Christmas at some point tomorrow to enjoy the festivities with my mum and dad, my younger brother and my elder brother, his wife and my niece and nephew.  Should be good.  Noisy, but good.  Whatever you're doing, I hope you have a great time and I'll likely see you on the other side.

For good measure, here are my Xmas Earworms.  They don't change much year-on-year, to be honest, but I love listening to Christmas music... just not the same old shit that you hear in every single shop you go into at this time of year.  I'm even bored of the Pogues record now, you bastards.

Ah, old Sandy Claw himself.  A bravura performance by a Bahamian folk legend who may be drunk and who certainly doesn't know all of the words.  A joyous song and one that fills me with intense pleasure every time I hear it.

Beautiful, wistful song from "Blue" with an echo of "Jingle Bells" in the melody.  A magical song.

I don't really know why this works, but I absolutely love it.  I think it's because the band perform this so wholeheartedly that they make it practically impossible to dislike them. It's joyful.

Phil Spector may be many things, but he certainly knew how to put a Christmas album together, and his "A Christmas Gift to you from Phil Spector" is just wonderful.  Released in 1963 and sounding just as fresh today.  I only need to hear the sleigh bells at the start of this record and it already feels like Christmas.

> "Killing in the Name" - Rage Against the Machine

If you've got any good Xmas record suggestions, then I'd love to hear them.

Have a good one y'all, and remember that the Pope has moved Midnight Mass forward to 10pm at the Vatican this year because he's got a busy day ahead of him and needs an early night.