rocking around the christmas tree....

The Christmas period in the office can be something of a trial.  I work for a retailer, so this time of year is a really big deal and accounts for something ridiculous like 75% of our profits.  With that fact in mind, it's really not so surprising that the High Street wants Christmas to start earlier and earlier every year, with the first adverts usually breaking cover in September.  I don't know about you, but I don't really start to feel festive until pretty much the week before Christmas, but now we're in December, it seems that almost everyone else is already there.  Even though our stores are at their busiest now, it's as though the office is starting the long wind-down to the holidays: people are planning their team Christmas parties; putting up decorations around their desks; holding their Secret Santa draws and generally spending as much time as they can doing as little actual work as possible.  Envelopes have now started appearing on my desk as colleagues leave me the Christmas cards that will never be reciprocated.

Now, instead of a tightly agendered team meeting, fuddles are being arranged.  Not familiar with a fuddle?  This is where everyone makes and brings along a dish, and then they're all put together and we all have a big, impromptu buffet and what is normally a stuffy business meeting is instantly transformed into a tremendously enjoyable and spontaneous team social occasion.  In a meeting room.   No, seriously, they're great.  Unfortunately I'll be missing my team's fuddle this year as I'm unavoidably busy doing ....um.... anything something else.

I'm no Scrooge though, and I'm not one to say "Humbug" entirely to the festive season.  Oh no.  Why, only this afternoon, in an attempt to get into the spirit of the season that seems to be sweeping through the rest of the office like a pandemic flu, a colleague and I decided today to put up our Christmas decorations.

We've taken the tiny Christmas tree off the windowsill where it has sat all year and have popped it onto the little table between our desks.

Oh, and we've added a fairy. 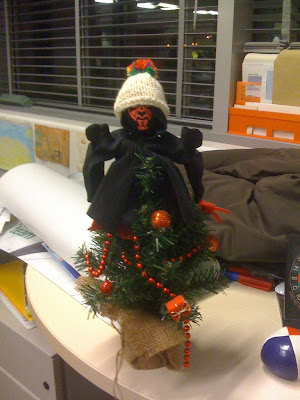 Yeah, well so it is only six inches high and perhaps it is stretching it a bit to describe a Dark Lord of the Sith as a fairy*.... but at least we're trying.

He is wearing a bobble-hat.