Another year, but the earworms keep on coming.....

Apparently I'm not free of Christmas records just yet. I've no idea why "Cameltoe and Whine" popped into my head, as I try and avoid it as much as possible as one of the more saccharine and cynical of seasonal cash-ins by Cliff (although not as bad as his subsequent "millennium prayer", I suppose it should be said....). Shocking record.  Shockingly christian record too.  Ack. It's bad enough in late December, but to be hanging around in the middle of January is something else entirely. I do like Christmas music though. Just because we hear the same fifteen or twenty records incessantly on a loop from September through the end of December doesn't mean that the whole genre is worth throwing out in disgust. My personal favourite is "Santa Claus is Coming to Town" by Joseph Spence, but everyone should really have the Phil Spector record, and there's loads of really good stuff out there if you're prepared to look for it. It doesn't have to always be Slade, Wizzard and Shakey. I was lucky enough to receive a CD in the post from David Belbin the other day. On it was a 16 track Christmas compilation, and a playlist of a further 40-odd seasonal songs on MP3. I haven't given it a thorough listen yet (that may have to wait until next Christmas now, to be honest), but I did give this James Taylor track a good listen... mainly because David missed it off his track listing, and I spent a while trying to work out in iTunes why I had one more song and wondering what it was. I suppose Nat King Cole's version of this standard is the definitive one ("Chestnuts roasting on an open fire..."), but it's always good to hear an alternative take.

> "Carol Brown" - Flight of the Conchords

Still stuck from last year. As I was listening to this when out on a run, I picked up a little lyrical aside from Jermaine that I'd missed in all my other listenings. It's throwaway, but it made me laugh out loud. Great little song. Probably enough of me going on about it though, eh?

C. got given a collection of Take That's first three albums for Christmas, and we listened to them in the car on the way home from parents. Hmmm. A handful of tracks aside, they really weren't very good, were they? Or perhaps I should look at it from the other way around: songs like "Patience" and "Rule the World" really are amazingly good, aren't they? Goodness they've improved with age. This song is alright, after a fashion. Why on earth did they pick Lulu though? I'm not complaining, really, and it's not as though she's not perfect for the role...but Lulu? Seriously? Was Cilla busy?

> "That Don't Impress Me Much" - Shania Twain

A record that annoys me the more I hear it, but as it nearly made it into the 2009 Earworm countdown, it's also a record that I have downloaded from iTunes. Twice. First time I downloaded an appalling dance mix by mistake and had to go back to get the album version. Yes, ridiculous, I know. Mutt Lange went downhill fast after Def Leppard, didn't he?

So you're Shania Twain?  That don't impress me much.

My musical find of a couple of years, and from an album that featured in my top ten albums of the decade as listed on The Auditorium. I swear that this record gets better every time I hear it.

I've heard this song a few times in the last few weeks, having nor heard it for months. I think it's on a playlist that they have on at the gym, and it also featured in the quiz LB prepared for us on New Year's Eve. I've no idea why I remember the band's name, as I can remember almost nothing else about them at all. The guy with the hat, right? Was this in an advert or something?

I've listened to quite a lot of Eels over the last couple of years, and for some reason, when I see the trailer for the Viggo Mortensen film, "The Road", it makes me think of Mark Everett. I suppose it's because the Cormac McCarthy novel the film is based on is pretty gloomy but also fantastically good.... a bit like Eels, although I don't think that McCarthy has quite the same sense of humour as E. I must go and see the film actually. I see that they've set it in a world blasted by some sort of unspecified ecological disaster. I read the book as being set post-apocalypse, but it's also entirely possibly that the author never actually says what destroyed the world. The focus is, after all, on the relationship between man and boy, and what caused the disaster is unimportant to them as they struggle to survive. If they've kept the cellar scene, then this could be quite harrowing.

Did we ever get an answer to the question posed here? I feel we need to be told. If we are dancer, then I'm sitting this one out.

The Dame is 63 years old today. He looks pretty good on it too, no? 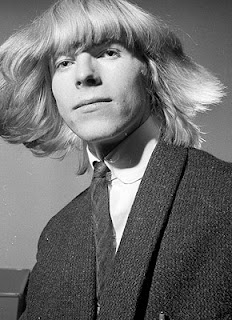 I always thought his career high point was as Jareth, the Goblin King of Labyrinth.