by the ocean road to linger there.... 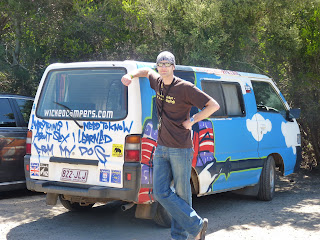 We only had one night in Melbourne, but it was long enough to reaffirm the impression I first got back in 2004 that this was the liveliest city in Australia. Alright, so perhaps it's not fair to compare a modern metropolis like this with a backwater like Launceston, but even in Sydney I found bars shutting early on a weeknight.... and here the whole place seems to be pumping.

The last time we were here, we stayed with some distant relatives of C's - they're my wife's mother's godmother's niece and family, that makes them pretty distant, right? Anyway, they're a lovely bunch, and they meet us at the airport and take us out for a splendid Italian meal. It's supposed to be our treat, but good people that they are, because we're staying in a hostel for the night instead of with them, they feel that they must pay... we protest, but they sneak off and pay anyway when we're not looking. Lovely people, and it's almost a shame that we're only in town for just the one night.

We have to leave though, as the Great Ocean Road is calling to us. Renting a car was pretty good in Tassie, but this time we wanted to go for the whole experience and have rented a campervan. Not just any campervan, mind, but a Wicked Camper. In theory, these are budget vans, but in practice, they're the only vans you would want to be seen in. 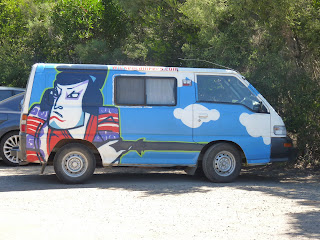 Well, I say that, but if we had been given the van next to ours in the Melbourne depot, then I'm not so sure I would have wanted to be seen in it, and would have driven to Adelaide under cover of darkness. Our Samurai pattern is pretty discreet - certainly when compared to one covered in graffiti about the size of the driver's penis.....

The Great Ocean Road starts around Geelong, a little way out of Melbourne, and curves along the coastline for something just under 300km. It was built in the years immediately following the First World War as a project to help give the returning soldiers a sense of purpose and something constructive to do during the Great Depression. It's justifiably famous, and it seems that almost every corner you turn opens up another breathtaking vista across the magnificent coastline. We've got the van for six days, so we take our time, but even then we only spend two nights on the road itself. We spend the first night in a lovely campsite in Apollo Bay, in a gorgeous spot next to a small creek and with the sound of the waves of the Southern Ocean crashing into the shore a couple of hundred meters away. The second night is spent at Peterborough, a far cry from its English namesake and with a splendid swimming beach. After that, we head up to the Grampians. 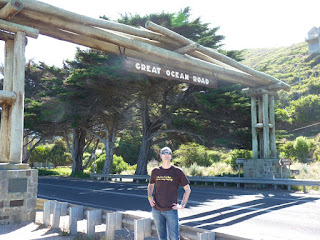 The Great Ocean Road is lovely, but I think that the more famous parts of it - on the Adelaide side - are by far the least impressive parts of it. It's not that the Twelve Apostles or London Bridge aren't spectacular to look at, it's just that they're not really massively more spectacular than other parts of the coastline we've already seen, and they're now so geared up for mass tourism that it rather takes the shine off what you're looking at. There's a massive visitor's centre and walkways at the Twelve Apostles, with a little airfield just behind so that a seemingly endless number of little helicopters can take off to give people a 15 minute scenic flight. This is the place where the big coaches stop: if you're going to visit the Ocean Road and you've only got one day to do it, then this is the place where you're going to come. The visitor's centre is only there because of this demand, and as a tourist myself, it's hard to get too snooty about the hordes of Chinese and Japanese tourists..... but having spent the morning at Cape Otway, cooing at the koalas in the trees, swimming on a pristine beach and walking along a secluded rainforest trail with almost nobody else in sight, it's hard not to feel oppressed by the hordes of people. 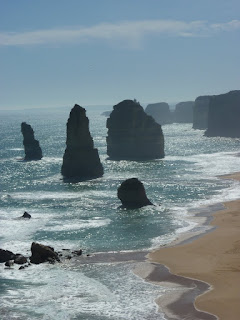 To get to the Grampians, we leave the Southern Ocean and hook up through rural Victoria. The landscape changes dramatically: we leave the coastline vistas behind us and enter a seemingly endless stretch of long, straight road with bushland farms on either side. It's a whole lot of nothing, and we drive through the kind of towns where not only are petrol stations not open at the weekend, but where some shops are only open one day a week. 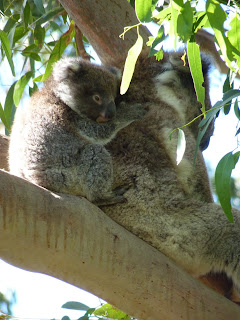 The scenery starts to change as we get nearer to the Grampians National Park, and the volcanic escarpments start to dominate the landscape. We pass through the holiday town of Hall's Gap and head on to a quiet little campsite in the national park called Smith's Mill. This really is in the middle of nowhere, and for the princely sum of $13, we get a bush shower (a bucket with a shower nozzle), a bush toilet (don't ask) and a fire pit in the middle of the forest. It's a lovely spot, and we cook over an open fire and watch kangaroos wandering around. We are invited to a sunday roast by our next door neighbours, but we have to push on. We check out a couple of viewpoints and then head on towards Adelaide. 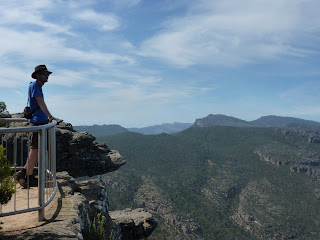 We stop for the night in a town called Naracoorte, and as well as marvelling at the town's manmade lagoon (seven times the size of an Olympic swimming pool and quite a nice place for a dip), we also check off another UNESCO world heritage site.... there are some caves here with fossils showing some of the earliest marsupials: a giant wombat, a massive kangaroo, marsupial lions, that kind of thing. It's also home to the southern bentwing bats, who are critically endangered, and we spend some time admiring them on infrared cameras and learning abo\ut them. It's a nice enough town, albeit another one that seems to shut up by 9pm, but again we're just passing through. 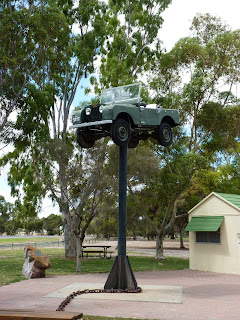 After lots of sweltering South Australian bush, we stop briefly at a nice little town called Keith, primarliy to get a postcard to send to my friend Keith (although how many towns have you been to that have a landrover on a pole?), but we're now on the highway to Adelaide.  After a recommendation from a couple we met in the Grampians, we stop at a place called Old Tailem Town to look at a reconstruction of how life used to be in a bush town.  Oh. My. God.  It's essentially a collection of mouldering junk housed in "period" reconstruction buildings.  Alarmingly it also has a number of shop dummies posed at alarming angles. 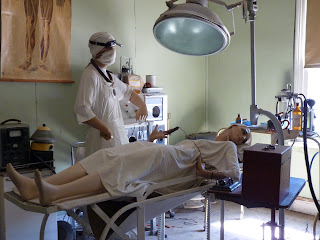 It's alarmingly like something from the League of Gentlemen, and we start to imagine that hapless visitors like ourselves are trapped inside the dummies and begin to feat that we may never be allowed to leave.  We practically run out of the door.... 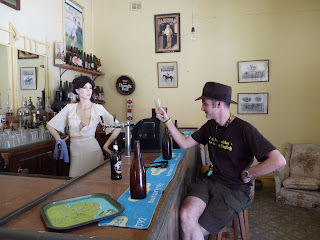 Our next stop is Mount Barker, about 40km outside the city. To my great delight we're now in Coopers country. Coopers is brewed in Adelaide, and we're now only about Coopers Pale Ale is, in my opinion, the nicest beer that I have tasted in Australia, and to be able to get it on tap is a real treat, even if I can't quite get my head around the fact that an Adelaide pint is 425ml, some 150ml short of an Imperial pint. It's a nice enough size for a beer, but it's not a pint....

The next morning we drop off the camper in Adelaide. I wasn't initially sure about it, but I've grown to love the flexibility it provides. Alright, so it's not the most comfortable sleep in the world, and it seems to move from oven to fridge in the space of about 20 minutes, but it's been brilliant to be able to cook what we want and to sleep where we want. The car in Tassie was fine, but it's nowhere near as cheap and flexible as a camper. I love being able to park up, crack open a beer (taken from the Eski with a slab of ice from a petrol station inside....) and to then gaze up at the awesome night skies. Quite why Orion is upside-down is a mystery to me, but I could gaze at the Southern Cross and the Milky Way for hours.... Which given that there's not much else to do when it gets dark, is probably a good thing. We decide there and then that we're going to fill that blank in our schedule between Cairns and Brisbane by hiring another camper. We also decide that this is how we want to travel around New Zealand. 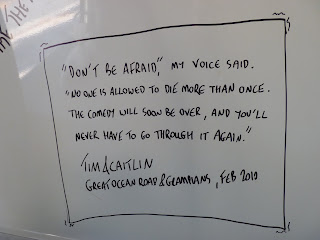 Although we spend something less than 24 hours in Adelaide, it's long enough to get a feel for the place. The Adelaide Oval is reputed to be one of the most beautiful cricket grounds in the world, but as it's currently undergoing renovation, that's kind of hard for me to judge. Instead of a tour, I have to content myself with a look around the Donald Bradman museum, marvelling at the assorted bits and pieces collected about that most humourless of accumulators..... (famously from Bowral, NSW incidentally, not South Australia).

The Adelaide fringe is on, so Rundle Street is filled with performers (I help out a scottish guy who does a neat act with a bed of nails), and down in the park at the bottom, there's a whole "Garden of Unearthly Delights" which has a whole assortment of acts on show along with a very distinct Glastonbury Lost Vagueness type vibe. We play twister in a caravan with a human tamogotchi and we visit a freak show displaying the remains of horned rabbits, two-headed cows, one-eyed chickens and the like. It's really quite cool. I liked Adelaide...and only partially because of the quality of the Coopers beer.

The weather here is perfect: endless skies and sunshine. It's almost a shame to leave so soon for Tropical north Queensland, but I'm anxious to discover if I will pass the stringent Australian medical and be able to spend the next week learning how to dive on the Great Barrier Reef.....