the coast is always changing.... 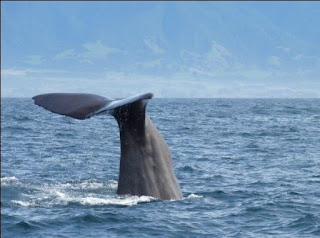 Even if it was famous for absolutely nothing else, Kaikoura is certainly a beautiful place to look at: it’s a small and very pretty peninsula, surrounded on one side by the ocean and on the other side by snow-capped mountains. It’s a reasonably small town, but it seems relatively unspoiled, even in the face of a huge quantity of tourist traffic... this town of some 3,500 permanent inhabitants gets something like 3m visitors a year. 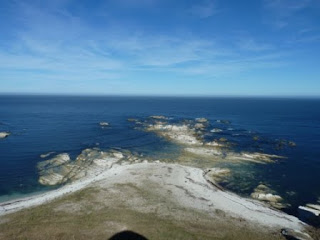 Why do all these people come? It’s a pretty town, but it’s not that pretty.... The answer lies in the ocean: Kaikoura has some extensive deep-water canyons unusually close to shore. Less than a kilometre from the beach, the seabed suddenly drops from being a mere 90m deep to being over 1000m deep. This deep water means that there is an up-wash of nutrients that attracts and supports an incredible diversity of marine life very close to the shore, from plankton all the way up to big sharks and whales. Whales might not be as common now in the shores off New Zealand as they were before the Europeans arrived and started systematically exterminating them, but there is still a large number of different varieties to be found passing through these waters. Usually their movements are seasonal, with the animals disappearing to warmer, tropical waters in the winter to breed. What makes Kaikoura such a tourist hot-spot is the presence all year round of a number of bachelor Sperm Whale. These magnificent creatures are the largest carnivores on the planet, and the young males apparently like to hang out in these waters until they are old enough to be accepted by a female for breeding in the tropical waters off Queensland.... by which time they may be more than twenty years old.

The waters around Kaikoura are good to these whales: although they ocean gets pretty chilly, they are well insulated from the cold, and the deep-water canyons provide them with easy access to giant squid and other food that they like to snack on. As a result, these young males will tend to find a spot and will spend their time alternately diving to feed and sitting on the surface for 10 minutes to recover before diving again. This makes them perfect for the whale-spotting industry in Kaikoura, and pretty much the first thing we did on arriving was to book ourselves onto a whale watching tour. The company that runs these trips reckons that they see whales on 98% of all their outings and are so confident that they offer an 80% refund in the event that you don’t see at least one whale...and judging by how carefully they looked, using a helicopter, previous sightings and an underwater listening device to see what the whale was up to 1km below the boat, I’m not surprised they’re so successful. We’re pretty lucky: not only is the sea really calm when we go out, but we get to see two Sperm whale. Well, we get to see the same whale twice. He’s called Kaitaiki, which apparently means “Guardian” in Maori, and we watch him surface from a feed, sit on the surface for 10 minutes breathing heavily out of his blowhole, and then we get to watch him sink gracefully back beneath the waves. 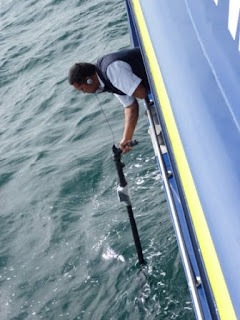 Sure, from a boat you don’t exactly get to see the whole whale, but you see enough of his 18m or so to feel pretty humbled by his sheer size. Perhaps you’re a believer in intelligent design – I seriously hope not – but this whale is a marvel of evolution. He has lungs and needs to breathe air just like you or me, but he can dive to depths of over 3000m for 45 minutes at a time, and is thus able to withstand incredible pressures as well as having an unbelievable control over his own buoyancy. We reckon we’re pretty clever, but we still have very little idea about how this works and have pretty much no idea what the waxy substance in the skull that gives the Sperm whale his name actually does.

Apparently, at other times of the year, you can see pods of Orca, humpbacked whale, Southern Right whale and even Blue Whale in these waters, but I’m just thrilled by the sight on one bachelor male Sperm whale. A great day (we also saw lots of albatross and seal cruising through the open water, but the day was always going to be about the whale, wasn’t it?) 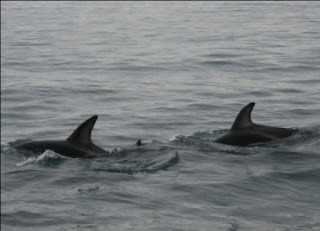 There are other marine mammals here too.... just driving into the town we see some dolphin somersaulting above the water, and we’re keen to get a closer look at them, and so book onto a trip that will take us out to see them. Apparently they sometimes have to travel up to an hour on the ocean to find the dusky dolphin, but in the event, we end up travelling a mere 5 minutes into the bay and we’re in the middle of a pod of at least 400 of these beautiful creatures. 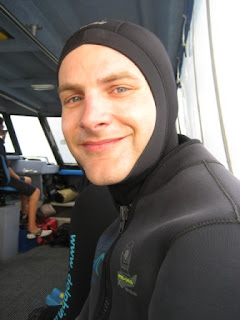 I’ve heard it said by New Age-y types that swimming with dolphins can cleanse your aura and replenish your chi... well, I don’t know about that, but I do know that a couple of hours spent in a thick wetsuit, looking like a total wally and singing through my snorkel was fantastic (apparently to attract the dolphins to you, you have to make things interesting for them, and as they live in a world of sound, you are encouraged to sing to them... Amarillo, a bit of Metallica and Lady Gaga in the style of the Swedish chef seemed to work for me). We were warned that these were wild animals, and that sometimes they just won’t be interested in the swimmers, but when we were there they were all over us. Sure, we had to get in and out of the boat a few times to make sure we stayed with the pod as it moved through the bay, but I basically spent all that time swimming with the dolphins. They’re certainly not scared of you, and they come really, really close to have a look. I actually swam around in a circle with one as we eyeballed each other for a few magical seconds, and frequently you would look down to find a dolphin swimming alongside you and another two or three below you. At one point, I looked up to see one of the dolphins jumping over me – I actually thought he might land on me, but of course his spatial awareness and agility are an awful lot better than mine, and he missed me comfortably. I’m not sure what I was expecting from the swim, and I think we were very lucky with the experience we got, but it was still magical. 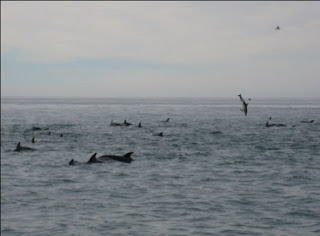 I really, really liked Kaikoura. As well as spending this quality time with whales and dolphins, we also went on a walk of the peninsula, got up close and personal with some fur seal and found another decent pub that was holding a reasonable quiz..... It didn’t rain once, either.

The weather shifted as we were leaving, but we were now heading up towards the north end of South Island, which apparently receives the most sunshine of anywhere in New Zealand. Well, the weather was nice enough when we were there, but what it’s most famous for is its grapes: this is the Marlborough Region and home of the most famous Sauvignon Blanc wines in the world. Looking at all the young vines that have clearly been planted in the last couple of years, you could almost imagine that the farmers around here have found a crop with a higher return than sheep or cattle.... The centre of all this, and the home of Cloudy Bay and the like, is Blenheim. We were only passing through really, but when we saw that we’d be driving past the Saint Clair vineyard – a wine we drink at home – then it really would have been rude not to stop and have a quick taster..... 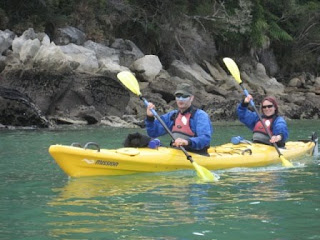 don't tell me.... I've got blue on me?
From Blenheim we continued on round to Montueka, the gateway to the Abel Tasman national park. Here we partially made up for missing out on kayaking in Milford Sound by spending two days kayaking around the coast. It was hard work, especially when trying to paddle round a headland into the teeth of the wind on a distinctly choppy ocean, but it was beautiful. 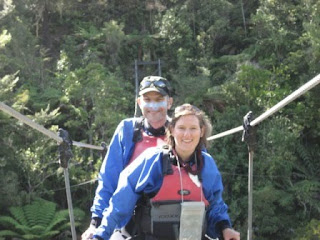 We had one slightly exciting moment when we capsized the kayak whilst trying to land on a beach in the surf, but with no harm done except to our dignity, we enjoyed some stunning views of the coast and of the inland track, and got really, really close to a seal pup nursery. 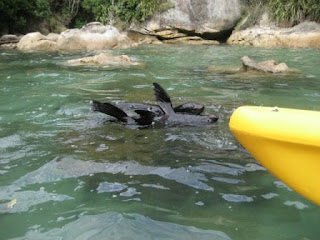 Apparently the pups are only about a week away from the stage where they will jump on your kayak to have a closer look at you, but I was happy that they swam right up to check us out. They’re beautiful creatures. Honestly, why would anyone want to club one of those when you can watch them and wear merino instead? We also spent the night on a floating backpackers in the park, and not only did I get my first proper bed in weeks, but I also got to share a room with three girls..... It’s all good, right? 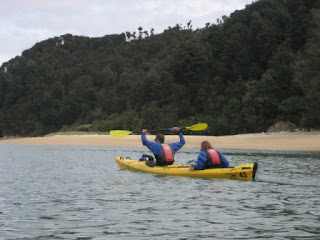 From there, we headed over to Picton to catch the ferry to Wellington and to say goodbye to South Island. Even the ferry ride here is beautiful, as you track through the Marlborough Sound before crossing the Cook Strait to North Island, and several times the boat was flanked by dolphin. South Island has been a bit wet and a touch chilly on occasion, but there’s no denying that it’s beautiful...... 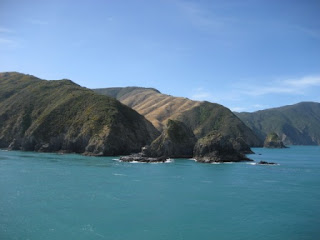 If North Island is anything like this, then we’re in for a treat.  It's meant to be warmer and dryer, for one thing....
Posted by swisslet at 07:58