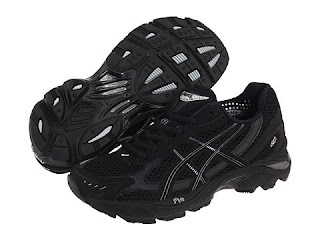 One of the things about tracking the distances that I run, is that I now know exactly the mileage that I’ve been putting onto my trainers. Before I began tracking my runs, I didn’t even have any real idea of how far my normal route was. Short of getting a map and a piece of string out, how on earth was I supposed to know? I suppose I could make a guess based upon how long it took me to run the route, but as I had no idea of how fast I ran either, that wasn’t really much help. Why worry about how old my trainers were? I just went out and ran, and thought that was enough.

You might wonder why this is such a big deal, but if you're a runner and you’ve ever suffered from shin splints or sore knees or a bad back or anything similar, then you’ll probably know that you’re supposed to change your running shoes every 500 miles. After that point, apparently, the cushioning is shot and you’re risking injury.

I’ve run regularly for many years now. Initially I only went out in whatever trainers I had to hand, but as my mileage increased, so too did the accumulated aches and pains I was feeling in my feet and in my shins. I thought that this was probably because I was fat and unfit and putting an unusual amount of pressure through my joints, but a friend advised me to go to a proper running shop where I would be able to get measured for the right running shoes. Until that point, I had no idea that not all running shoes were created equal and that not every type of shoe is suitable for everybody. I ran in a pair of reasonably expensive Nikes, and I assumed that their expense meant they were good.

At my local branch of Sweatshop, they put a mat on the floor and analysed on the attached computer how my foot hit the ground as I ran over it. This revealed that I was a mild overpronator, striking the ground with the outside edge of my heel and rolling my foot diagonally across as I took a stride. The right shoes for me, I learned, were ones with a decent amount of support padding that would reduce the massive amounts of pressure I was driving through my foot and up my legs and spine with every stride. The first trainers I got as a result of this analysis were actually half the price of the Nikes that I had been wearing and they made an immediate difference to the impact running was having on my body. It still hurt, obviously.... only now it wasn't making my shins sore and my knees and back stiff.

Even then, I still had no idea how far I was running or how much mileage I was putting into my trainers. I used a heartrate monitor that told me how hard I was working, but it was not until I started using Runkeeper on my iPhone in November 2008 that I had any idea of distance or pace. Well, the statistics tell me that, since November 2008, I have run 642 miles in some 144 separate activities (and counting....I reckon I’ve used Runkeeper in more than 95% of the runs I’ve done, plus a couple of ski runs). For a man of my height and weight, that’s more than 114,754 calories worth (445 58g Mars bars, fact fans!). I also now know exactly how far I usually run and at what pace, and as a result I know every single time I go out running if I’m having a good day or a bad day based upon the speed I'm running.

I’m naturally a very one-paced runner, averaging about 9-9 ½ minutes per mile. Over the last week or so, I’ve made a conscious effort to run a little bit faster. Runkeeper gives me a checkpoint every mile, letting me know my current pace, and I’ve used this as motivation to try to pick my knees up and to run a little faster. It’s hard work, of course, although I’m fairly sure that most of this is mental rather than physical as I have to fight my natural urge to run within myself. It seems to have been working too, as my average pace is coming down to below 9 minutes per mile, and as a result I’ve knocked 3 or 4 minutes off my time for my usual run. Most of those 140-odd runs have been done wearing the same pair of trainers. When I looked at my overall stats, I realised it was high time I bought a new pair. For the last five years, I’ve settled on Asics Gels as my running shoe of choice, so it was a simple matter of buying this year’s version of the shoe I always buy – the GT-2150, this year in a natty black colour, with elastic triathlon laces, naturally, as the idea of normal laces in my running shoes now just seems weird....

As always, and even though the shoes have yet to mould properly to my foot, the difference in the cushioning between the old and the new added a new spring to my step. I don’t know if this made a difference to my pace, but last Saturday, my average pace for my normal 4 ½ mile run dropped to 8.05 minutes per mile, with my pace for miles 3 and 4 actually dropping below 8 minutes per mile. That's a good five minutes faster than I have been running the route.   I have been a little worried about my physical decline and wondering if I was slowing down as I get older or as my MS progresses. I now seem to have concrete evidence that this is not the case.

It’s not easy, but it’s certainly very gratifying.
Posted by swisslet at 19:40

Email ThisBlogThis!Share to TwitterShare to FacebookShare to Pinterest
Labels: exercise, exercise as therapy